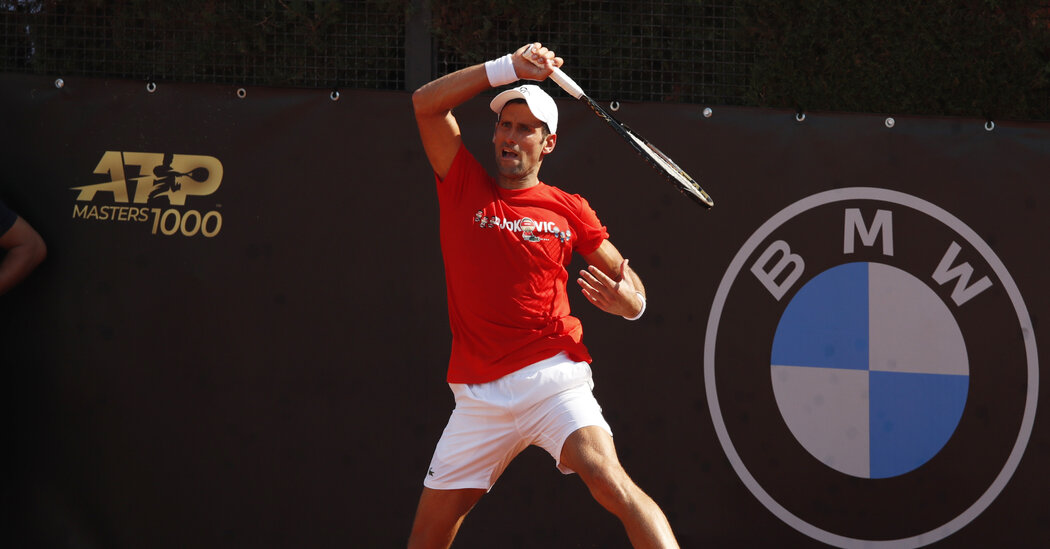 Eight days after his abrupt disqualification from the United States Open for accidentally hitting a line judge with a ball, Novak Djokovic said that he saw the incident as an opportunity to improve the mental side of his game and that he hoped he could be a “wiser” player as a result.

“I’m working mentally and emotionally as hard as I am physically, trying to be the best version of myself on the court, off the court,” Djokovic said Monday from Rome, where he will compete in the Italian Open this week. “I understand that I have outbursts and it’s the personality and kind of player that I have always been.”

He added: “Obviously I went through ups and downs in my career, managing to control my emotions more or less. But you’re alone out there, it’s a lot of intensity, a lot of pressure, and you have to deal with all of that.”

Djokovic spoke with reporters at length Monday for the first time since he was defaulted in the fourth round of the U.S. Open. While behind in the first set against Pablo Carreño Busta, Djokovic hit a ball about 40 feet, from the court toward a back wall, where it hit a line judge in the throat. She collapsed, and Djokovic tried to comfort her. After a lengthy discussion with tournament officials, he was disqualified, upending the men’s singles draw.

“The rules are clear when it comes to that,” Djokovic said. “I accepted it, and I had to move on.”

Until then, Djokovic had not lost a match all season and was heavily favored to win the U.S. Open, which would have been his 18th Grand Slam tournament title. Dominic Thiem, seeded second, beat Alexander Zverev for the title on Sunday night in a thriller that ended with a tiebreaker in the fifth set.

Djokovic admitted that his disqualification, although somewhat unlucky, was “not completely out of the blue” given his propensity for expressing anger on the court, which has sometimes included being reckless with equipment.

At the 2016 French Open, he swiped his racket in anger and it slipped out of his hand, just missing a line judge. He could have been defaulted, but he went on to win the tournament — his only French Open victory.

Later that season, he quibbled with a reporter at the ATP Finals after hitting a ball into the stands without hitting anyone. The reporter said it could have been dangerous for spectators.

“It could have been, yes,” Djokovic said at the time, bristling at the reporter’s suggestion that the behavior might be part of a pattern. “It could have snowed in O2 Arena, as well, but it didn’t.”

His defiance then appeared to be much different from his sentiment on Monday, when he said he was “really sorry to cause the shock and drama” for the line judge who was hit.

“She didn’t deserve that in any way,” he said. “She obviously is volunteering as well and doing her work. She loves tennis, and she’s been there, as I understood, for quite a few years.”

He stopped short of guaranteeing a something similar would not happen in future tournaments, but said he would certainly remember it and learn from it.

“I don’t think I’ll have any major issues coming back to the tour and being able to perform well and hit the tennis ball — of course, during the point,” he said.

At the coming French Open, Djokovic will aim to become the first man since Rod Laver in 1969 to win each Grand Slam tournament twice. He said he was glad to have new goals to focus on right away, though he still considers the 12-time French Open champion, Rafael Nadal, as the clear favorite.

“Rafa obviously decided to stay on clay and practice, and surely that gives him more advantage,” Djokovic said of Nadal, the 2019 U.S. Open champion who skipped an attempt at a repeat because of the coronavirus pandemic.

“Even if he didn’t practice for that long on clay, he would still be the No. 1 favorite in Roland Garros or any other clay tournament because he’s Rafa,” Djokovic added. “Playing on clay, he’s the ultimate challenge.”

Nadal is among many players, including second-ranked Simona Halep, who will be returning to major competition after declining to travel to the United States during the health crisis.

“It’s obvious that to feel 100 percent, you need matches. But here I am,” Nadal said Monday. “I arrived with plenty of time to try to have the right practices.”

At the Italian Open, Nadal will play his first match against Carreño Busta, who after facing Djokovic reached the U.S. Open semifinal.

“It’s going to be a good test,” Nadal said. “I’m excited about going back to competition, without big expectations.”

Halep figures to be the top seed in the women’s singles draw at the French Open because the defending champion, Ashleigh Barty, the WTA No. 1, does not plan to play.

Like Nadal, Halep said she had “no regrets” about choosing to skip the U.S. Open.

“Of course I’m sad I didn’t play, it’s normal, but I feel like my decision was great for the health issue and to feel relaxed inside,” Halep said.

“I always have been secure and happy on the clay, and now I’ve had four or five months playing only on clay — I’m not used to that,” Halep said. “I feel comfortable and ready to play here. I love this tournament. I love French Open, so hopefully I can play my best and win some matches.”

Watching the U.S. Open and Djokovic’s disqualification, Halep said, was a reminder to consider the safety of others on the court.

“We have to really be careful because people are around us and we don’t have to react that bad during the matches because it’s just a tennis match,” she said. “It was not nice for anybody.”