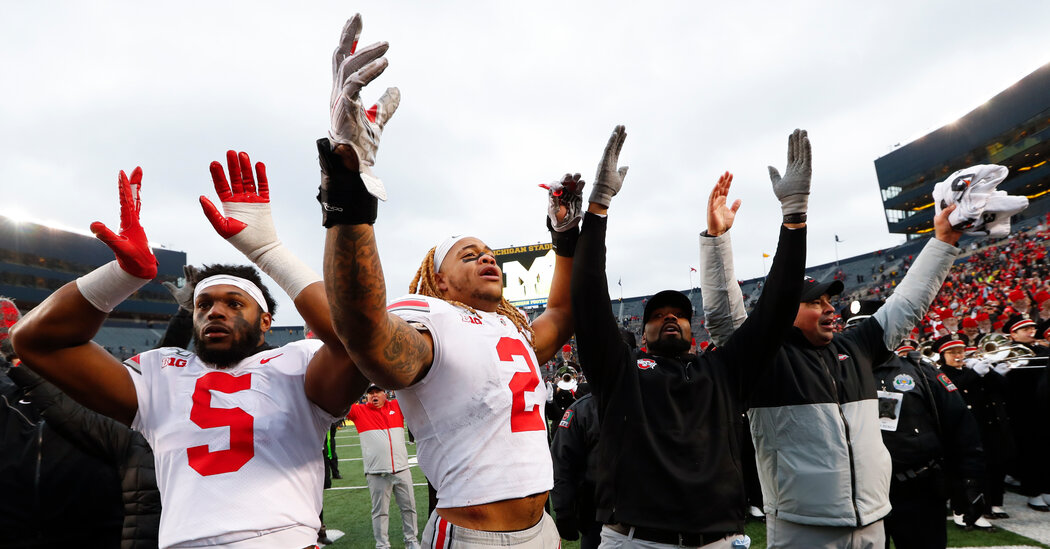 The Big Ten Conference said Wednesday that it will try to play football as soon as the weekend of Oct. 23-24, stepping back from its leadership’s decision just more than a month ago not to compete this fall because of the coronavirus pandemic.

The move by chancellors and presidents representing the Big Ten’s 14 universities will quell some of the pressure — from prominent coaches, parents, players, fans and even President Trump — faced by the first Power 5 league to drop plans for football in 2020. But it is also likely to provoke new outrage from those who will believe the league is prioritizing profits, entertainment and a measure of public relations peace over health and safety.

In a statement on Wednesday morning, the league said players, coaches, trainers and others who are on playing and practice fields would undergo daily testing for the virus, and that any player who tested positive would be barred from games for at least 21 days.

The conference, which said that the decision by chancellors and presidents to play was unanimous, also said that a team would stop practice and competition for at least a week if it recorded a positivity rate of more than 5 percent.

More than 8,500 cases of the virus have been reported at the Big Ten’s 14 universities over the course of the pandemic, according to a New York Times database of infections at colleges. Four of those universities had more than 1,000 cases, many of which were detected by aggressive testing of students returning to campus this fall.

Leagues that have returned to play, like the Atlantic Coast Conference and the Big 12, have so far found it tricky to navigate the epidemiological perils of the pandemic. A handful of games have been postponed, some teams have held out players because of positive tests or contact tracing and stadiums are operating with fewer spectators in the stands or none at all.

Now the Big Ten is poised to try to join them, potentially salvaging the seasons of some of the most renowned and lucrative names in college sports, including Michigan, Nebraska, Ohio State, Penn State and Wisconsin.

The league will probably release a schedule later this week, but Big Ten teams are expected to play eight regular-season games each, with the top teams from each division advancing to a league championship game on Dec. 19. In a twist, teams that fail to reach the title showdown will play an exhibition game of sorts against the team in the opposite division with the same position in the standings. Had a similar system been in place last season, for example, Penn State, which finished second in the East Division, would have met Minnesota, the runner-up in the West Division, for a final game.

Members of the public will not be allowed to attend games, conference officials said, though relatives of players could be permitted.

It was only on Aug. 11 that the league, which had already moved to a conference-only schedule, said it would not compete until at least 2021. In an interview that day, Kevin Warren, the Big Ten commissioner, said there was “too much uncertainty, too much risk” to proceed with athletics this year.

Sports and the Virus

Here’s what’s happening as the world of sports slowly comes back to life:

“You have to listen to your medical experts,” Warren said then. “There’s a lot of emotion involved with this, but when you look at the health and well-being of our student-athletes, I feel very confident that we made the right decision.”

Later, with the league under a barrage of public dissent from within its ranks and fans across the Midwest, Warren released an open letter that declared the decision would “not be revisited.”

That did not stop the league’s critics from trying to overturn the decision anyway. Parents of players protested outside the league’s offices near Chicago, some players pursued litigation and Ryan Day, Ohio State’s coach, issued a pointed statement last week that said “the communication from the Big Ten following the decision has been disappointing and often unclear.”

He added, “However, we still have an opportunity to give our young men what they have worked so hard for: a chance to safely compete for a national championship this fall.”

Even with some of its football programs pausing workouts because of outbreaks, Big Ten officials convened over the weekend as speculation intensified that the league would ease its posture.

By then, the season’s fate had even become a subject of the presidential campaign. Trump, facing attacks from his Democratic rival, Joseph R. Biden Jr., who accused him of mishandling the pandemic and upending Big Ten football, called Warren on Sept. 1 to urge the league to play and to offer federal aid. On Wednesday morning, Trump greeted the announcement as “great news” and declared on Twitter that it was “my great honor to have helped!!!” (It was not immediately clear whether the Big Ten accepted any of the president’s offers of assistance.)

And all the while, teams, which were permitted to hold limited practices, kept preparing for the possibility of a season. Teams, coaches reasoned, needed to remain ready regardless of when games were allowed — and especially if they were scheduled quickly.

“We don’t know when it’s going to be,” Tom Allen, Indiana’s coach, said in an interview late last month. “That’s what keeps you on your toes.”

The Big Ten’s announcement on Wednesday applied only to football. It said plans for other fall sports, as well as winter sports like basketball and wrestling, would be announced “shortly.”

The decision by the Big Ten will assuredly turn new attention toward the Pac-12, which also said Aug. 11 that it would not play football this year. Already this week, football players at Southern California wrote to Gov. Gavin Newsom and urged him to lift restrictions keeping the state’s four Pac-12 members — California, Stanford, U.C.L.A. and U.S.C. — from returning to play. Other players in the league followed along on Twitter with their pleas to the governor.