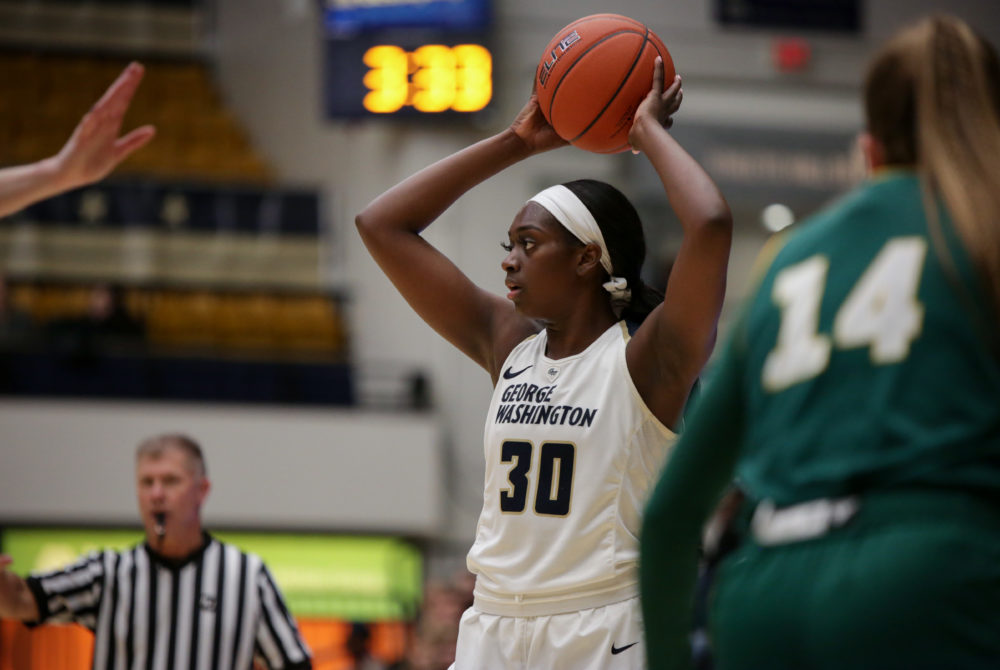 Redshirt junior forward Neila Luma will participate in the program alongside three of her teammates.

Women’s basketball is teaming up with squads across the Atlantic 10 to fight for social justice.

“A lot of times when you are an athlete, your voice is kind of silenced because they say, ‘just dribble a ball,’” said Taiwo, who serves as a general body member. “But I think it’s great that we’re taking the steps to show that yes we are athletes, but outside of athletes we’re all women, some of us are Black women, but some of us are allies.”

Members plan to host panels with lawyers and local law enforcement on their rights and peaceful protests, Taiwo said. The organization will also connect teams with voter registration groups to provide resources on where to vote, how to vote and who’s on the ballot, she said.

Women’s basketball teams will also play in a game honoring BLM during the week of Martin Luther King Jr.’s birthday in January, the website states. Student-athletes will wear black warm-up shirts with “Athletes Driving Change” written on the back and the school logo made from names of victims of police brutality placed on the front of the shirt, the organization’s website states.

“The goal of these games is to provide African-Americans and other minorities that play the sport of basketball a day of celebration,” the website said. “These shirts will physically display the unity we all feel and the dedication to standing together to make change.”

During Black History Month in February, Athletes Driving Change will donate $1 for each free throw made and will urge the A-10 to match the donation. Donations will be put toward the Colin Kaepernick Know Your Rights Camp, which seeks to uplift the voices of minority communities through education and self-empowerment.

Luma, the vice president of Athletes Driving Change, said Dayton redshirt senior guard Araion Bradshaw reached out to at least one member of each team in the conference after protests broke out across the country earlier this summer to share ideas about how the league can unite and foster change for racial equality.

“Ultimately our mission is to create real change toward equality for all people,” Luma said. “To do that, we’re really just collaborating and finding different ways to engage in our communities across all of the college campuses in the A-10.”

Head coach Jennifer Rizzotti said she was sent a list of “actionable items” Athletes Driving Change wanted to accomplish, like holding a game honoring BLM and partnering with a local school or community center to mentor children.

“Essentially we’re here to raise them up and support them,” Rizzotti said. “We’re here to publicize and promote as coaches and just let them be the voice and the mouthpiece for this organization because it really is their creation and their baby.”

Outside of Athletes Driving Change, the squad has been active in promoting equality, releasing statements, raising awareness for social justice and creating action plans after the death of George Floyd and shooting of Jacob Blake. The team also attended the March on Washington last month.

The team has been holding conversations about advocacy and racial equality since June and have shared books and movies about racial equality with one another, Rizzotti said.

She added that an assistant coach told each player to research a monument or building in D.C. that is significant to Black history. The team will compile each location into a pamphlet for visiting teams to explore, she said.

Rizzotti said her team has spent the last few months reflecting on their individual backgrounds and implicit biases and learning how to have “uncomfortable conversations.” She said she’s “proud” of her group for the passion they’ve shown in advocating for racial equality.

This article appeared in the September 21, 2020 issue of the Hatchet.