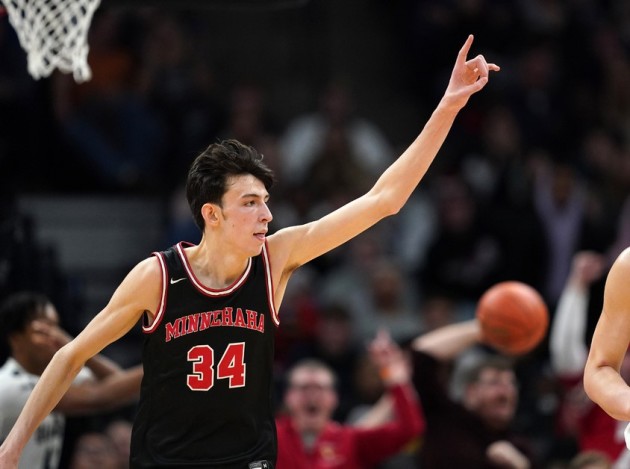 When will Minnehaha Academy forward Chet Holmgren, the state’s No. 1 senior recruit, and other high school basketball players return to the court? (Anthony Souffle, Star Tribune)

With the fall athletic season underway – and in some cases, nearly complete – thoughts are turning to winter sports.

“We know there will be basketball played in Minnesota this winter,” said Tom Critchley, executive director of the MBCA. “The question is whether it’s going to be run by for-profit clubs or by the high schools. We prefer the high schools because we believe it will keep more kids safe if they’re in a controlled environment.”

Critchley said MBCA is waiting until start and end dates for the season are set before developing a cohesive plan. “The one thing we’re most concerned with at the moment is when that season will start.”

Starting and ending dates for both basketball and hockey are expected to be determined Thursday at  MSHSL board of directors meeting.

Critchley said the MBCA has been communicating with members of the MSHSL since July. There were times, he said, when the concern was if “we were going to have a season.”

“But when the league scheduled the meeting to discuss bringing football and volleyball back, we got a good feeling that the Return To Play task force was going to move ahead with recommending scheduling boys’ and girls’ basketball,” he said.

Unlike the hockey coaches, the MBCA discussions have been centered on the MSHSL mandate to reduce the length of seasons by 20 percent and the number of contests by 30 percent, which it did for fall sports. That would mean a roughly 14-week, 18-game basketball season.

“That’s the precedent the league has set, and they’re big on following precedent, so that’s what we’ve settled on,” Critchley reasoned. “The hockey coaches haven’t settled into that 20-30 concept and they’re pushing for more. Good luck to them. I hope they get it because that could help us.”

He added that he expects any plan the MBCA devises will adhere to other MSHSL guidelines, like practicing in pods, no more than 25 kids in a gym and the elimination of in-season tournaments and invitationals.

Critchley said the MBCA was encouraged by the success of AAU basketball over the summer in preventing COVID-19 outbreaks. “From everything I heard and observed, Minnesota coaches really followed the protocols established by Tarek Tomes and the (Minnesota) amateur sports commission. There were no real outbreaks that I heard of from any Minnesota events.”

Originally, the plan was to begin basketball practice on Nov. 16, but it’s expected to move back now that the football season won’t be finished until Thanksgiving weekend  and with the MSHSL wanting to avoid overlapping seasons as a precautionary health measure.

In the most recent Return To Play task force workshop, the league targeted either Nov. 30 or Dec. 7 as starting dates for basketball. “We think Nov. 30 is a reasonable start date,” Critchley said. “It’s after the end of the football season. We don’t want to start any later than that.”

Another primary issue to be determined is the postseason. The MSHSL has not conducted a state tournament since last March, when it canceled the end of the girls’ basketball tournament and the entire boys tournament scheduled for the following week.

In its most recent operating budget, the league, facing a significant revenue shortfall, did not include funding for any state tournaments for the 2020-21 school year.

Critchley acknowledged that the MSHSL has leaned away from state tournaments on the recommendation of the Minnesota Department of Health and is promoting smaller, more regional “season culmination events” similar to section playoffs. But he said the league never addressed the cancellation of a state tournament directly.

“We’ve never been told no to state tournaments,” he said. “We’re moving ahead with the assumption there will be culminating activities. We don’t know what that might look like, but we know it will not be designed like last year’s state