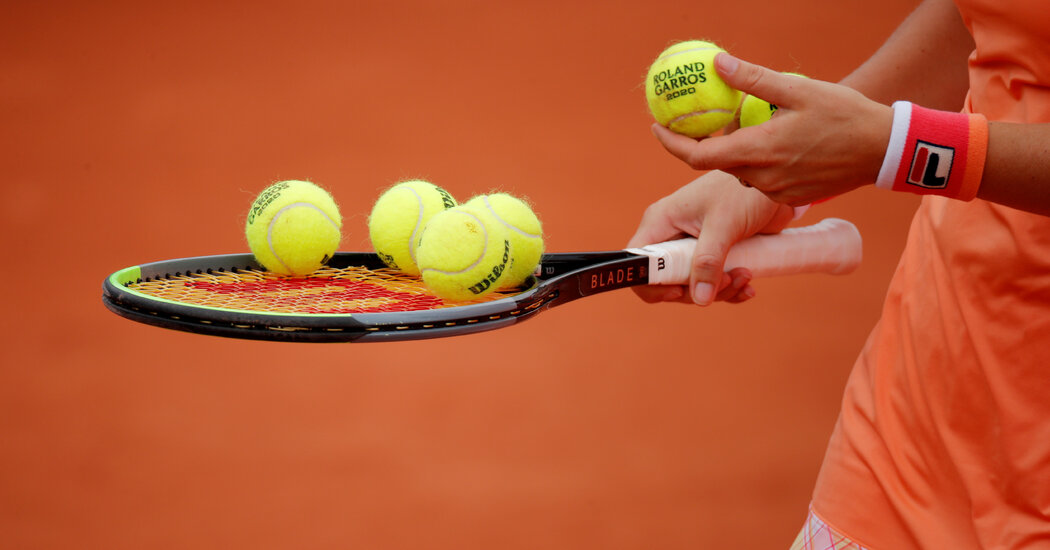 Neither the pioneer nor the present-day popularizer of the underhand serve has been in Paris this year during the French Open.

Michael Chang, who won the tournament with a clutch use of the serve in 1989, is back in the United States, spending time with his wife, Amber, and their three young children. Nick Kyrgios is back in Australia, spending time on social media as a freelance tennis critic, which should make for some testy conversations with his peers when he finally does return to the circuit in person.

But Chang’s and Kyrgios’s legacy has been on frequent display in the first week of the Grand Slam tournament.

Underhand serves, once broadly considered underhanded in the sport, have been popping up in the autumnal gloom like mushrooms in the French countryside.

Peak season may have been Wednesday. In the stretch of a couple of hours, you could watch Alexander Bublik hold serve with an underhander (it seems time for a punchy, one-word term), see Sara Errani save a match point with one and watch Mackenzie McDonald save nothing at all with a floating, sacrificial offering of an underhander that the 12-time French Open champion Rafael Nadal pounced on for a return winner en route to a 6-0, 6-1, 6-3 victory.

“If he’s winning, it’s a good tactic; if he’s losing, it’s a bad tactic,” Nadal said. He added that, for example, it was “not a good tactic” for Mackenzie. For Bublik, he said, “if that works,” it was “a good tactic.”

Unfortunately for Bublik, it did not work often enough. He lost his second-round match to Lorenzo Sonego in a duel that was also brimming with other tennis exotica, like serve-and-volley tactics and tweeners.

With Kyrgios taking a break because of the coronavirus pandemic, Bublik is clearly the standard-bearer for the underhander.

A tall and flickering talent from Kazakhstan, Bublik, like Kyrgios, has a thunderous first serve that only makes his underhanded efforts all the more unsettling for the opposition.

It is the tennis equivalent of a changeup from a flame-throwing relief pitcher, but Bublik knows he cannot go to it too often, or the element of surprise is gone.

He has been deploying it once or twice a match in recent tournaments. At the German Open last week, he aced Felix Auger-Aliassime with one in a first-round victory and aced Cristian Garin with another in a quarterfinal defeat, as Garin voiced his displeasure with the tactic.

In Paris, he aced Gaël Monfils in the first round and Sonego at 4-5 in the opening set, before missing another underhand serve in the tiebreaker.

Bublik actually prefers the term “underarm serve,” which has its supporters.

“To be honest, serving a good underarm serve is very tough,” Bublik said. “I really practice.”

That does seem the path forward, particularly after watching McDonald’s unsuccessful effort.

“Mackie’s was terrible,” said Paul Annacone, the veteran coach and Tennis Channel analyst. “I think you should practice it a bit if you are going to use it. I do believe a good underarm serve is warranted in today’s game.”

With leading players like Nadal and Dominic Thiem and rising players like Sonego often standing back by the line umpires to return, there is certainly room for a serve that is designed to function like a drop shot. Not only do underarm serves land closer to the net, they often pose a timing challenge, because the server does not make a long, high toss and instead flicks the ball forward at a moment when a windup would usually begin.

“We have never had players stand back that far before to return serve,” Chang said on Wednesday night. “From a tactical standpoint, it makes logical sense.”

Chang’s memorable underhand serve at the 1989 French Open was an act of desperation, not strategy. At age 17, he was facing the No. 1 seed, Ivan Lendl, in the fourth round and had rallied from a two-set deficit but was cramping badly in both legs in the fifth set.

At one stage, Chang actually started walking toward the chair umpire, Richard Ings, to retire from the match, but he stopped short because he said he felt as if God was telling him to keep pushing.

Serving at 4-3, 15-30 in the fifth set, Chang could feel that Lendl was on his way to breaking him again, and with his legs hurting, he decided, quite spontaneously, to try the first underhand serve of his career.

It landed short, and a surprised Lendl managed to dash forward and return it, but he could not handle the subsequent Chang passing shot. Chang went on to hold serve to 5-3 and then to break Lendl, who double-faulted on match point. Chang won, 4-6, 4-6, 6-3, 6-3, 6-3.

“If they play that match 20 times, Michael wins it once,” said Jose Higueras, Chang’s coach at the time.

Chang went on to win the tournament, his only Grand Slam singles title, and more than 30 years later, it is that underhand serve that still sticks with those who remember his success; many mistakenly recall the Lendl match as the final.

But surprisingly, in a sport where success quickly generates imitation, Chang’s masterstroke did not start a trend. That is partly because of an unwritten code that framed the shot negatively, as an unsporting, showboating attempt to make an opponent look bad.

When Martina Hingis tried a couple of underhanders under duress against Steffi Graf in their tumultuous, irresistible French Open final in 1999, the French crowd turned against Hingis, who went on to lose.

After Chang, no man attempted it in a high-profile match for decades. Ivo Karlovic, a towering Croat with one of the best serves in history, tried one that worked against Tommy Haas in 2007. But generally, when somebody did attempt the shot, as the Frenchman Mikael Llodra did a few times during his career, he practically had to apologize.

“I was feeling so bad on court that I was just trying something fantastical to try to get a breath of fresh air,” Llodra said in 2011 after a lopsided loss to Robin Soderling.

Another French player, Virginie Razzano, also tried a few during the 2010s when she was struggling with her serve. So did Errani, who has struggled with hers throughout her career and has resorted to the tactic more than any active player.

On Wednesday, in a wild ride of a three-setter against Kiki Bertens, Errani served for the match at 6-5 in the third set and tried four consecutive service tosses without being able to pull the trigger. She finally went back to the underhand serve and lost the point. She later saved a match point with another underhander before losing, 7-6, 3-6, 9-7.

“There are days where it is really bad,” Errani said, adding that she had “just tried to compete with everything I have.”

But increasingly, the underhander has become a show of strength instead of weakness. Kyrgios, who relishes playing mind games with opponents, has brought it back into vogue, irking Nadal last year when he used it in Acapulco and then acing him with it again at Wimbledon.

Nadal seems to have to come to terms with it — tennis’s rule book clearly allows it — but still views the trend through a moralistic lens.

“If you do it with the goal to improve your game, or like a tactical thing, I support it 100 percent,” Nadal said Wednesday. “If you do it to disrespect the opponent, it is not a good thing. Everybody knows internally if you are doing it in a good way or a bad way.”

Monica Niculescu tried an underhander against the feisty American Danielle Collins in the first round. Collins roared after she won the point but said it was not because she had taken umbrage.

“I was just pumped I saw it coming,” she said. “I approve of people thinking outside the box and being creative.”

Ultimately, the shot will thrive or wither based on results, and Chang, who tried it only once during his career, certainly liked his results.

“I have never lost a point serving underhand,” he said.