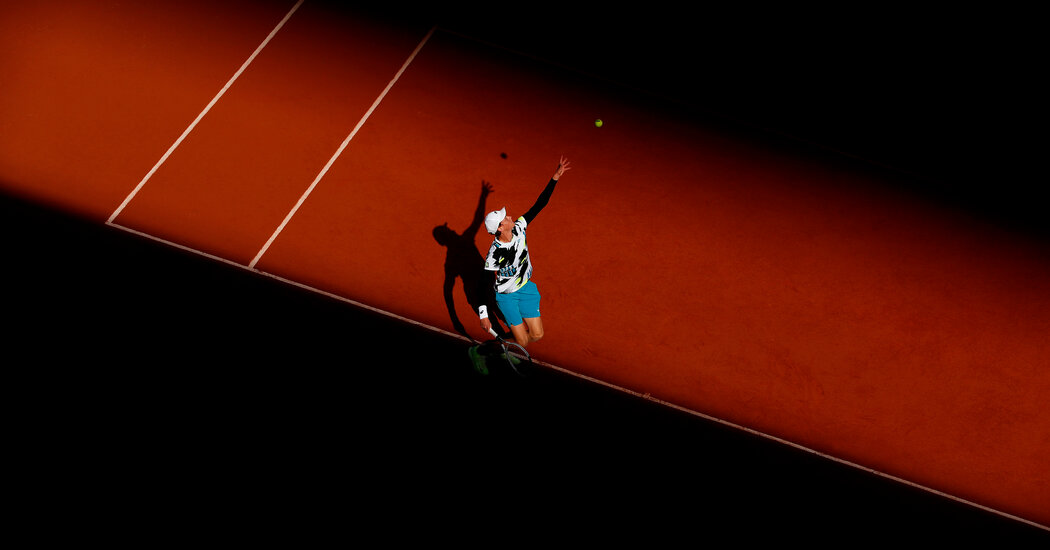 Before Jannik Sinner took his first steps toward scaling the world tennis ladder, he was quickly descending mountains in the Italian Alps.

Sinner, 19, learned skiing before tennis, and German before Italian while growing up in South Tyrol, a territory of Austria until World War I that is now known as a placid retreat.

He only began to take tennis more seriously at age 13, moving from Italy’s northeast to the northwest to train at the academy of Riccardo Piatti in Bordighera, near the French border.

Piatti, who had met Sinner earlier at a tournament in Milan, said he was immediately impressed by Sinner’s courage on the court and his unusual willingness to play proactively rather than wait for his opponents to miss their shots.

“He was close to the baseline, hit the ball fast, hit the ball to win the points,” Piatti said of Sinner. “It’s not normal to see players under 13, 14, similar to that.”

“This kind of education he has also in tennis,” Piatti said. “He’s very focused when he plays a point, and after that he relaxes.”

His sharp ascent in tennis is the inverse of how he has navigated snowy mountains. Two years ago, he was ranked 870th. Now, Sinner is ranked 75th on the ATP Tour and poised to break the top 50 after reaching the French Open quarterfinals.

Should he pass the steep test he faces on Tuesday — 12-time champion Rafael Nadal and his 97-2 record at Roland Garros — the scope of his breakout would magnify.

“Not the easiest thing, for sure,” Sinner said of that challenge.

Sinner’s biggest career achievement before the French Open came last year, when he won the ATP Next Gen event for players 21 and younger. At only 18, he blitzed the field while playing in a quicker format.

This French Open quarterfinal against Nadal will be Sinner’s first match facing any of players who make up the Big Three of men’s tennis, including Novak Djokovic and Roger Federer. Still, in the lead-up to the French Open, Sinner practiced on consecutive days with No. 3 Dominic Thiem, the No. 1 Djokovic, and No. 2 Nadal.

Nadal said that he has seen Sinner “improving every single week” of the tour.

“He has an amazing potential,” Nadal said. “He moves the hand very quick and he’s able to produce amazing shots.”

The speed of Sinner’s improvement was also noticed by the sixth-ranked Stefanos Tsitsipas, who beat Sinner in straight sets at the Italian Open last year, then lost to him 16 months later at the same event.

“For sure, we can see a great future, see him do good things on the circuit,” Tsitsipas said. “I would not be surprised, yeah, if he has good wins against the top five and the top three. Why not? He has a very big game, a very talented player. I think he is a hard-hitter as well, which makes it difficult.”

When Sinner got the best win of his career on Sunday at Roland Garros, beating the recent United States Open finalist Alexander Zverev, 6-3, 6-3, 4-6, 6-3, in the fourth round, his celebration was muted, simply holding up his right fist as he walked up to the net.

“Still a lot of work to do,” Sinner said after the match. “Physically, technically, everything. It’s, yeah, a long way.”

Piatti said that Sinner’s breakthrough has come in part because he savors the playful elements of the game.

“With the professional players, everyone thinks it’s a job they need to do. Him, he loves to practice,” Piatti said.

That attitude, Piatti said, has kept the pressure down.

“He knows that every point there is a solution and he has a game to find the solution to try to win every point,” Piatti said. “Mental strength is when it’s easy. For him, it’s quite easy, everything that he’s doing.”