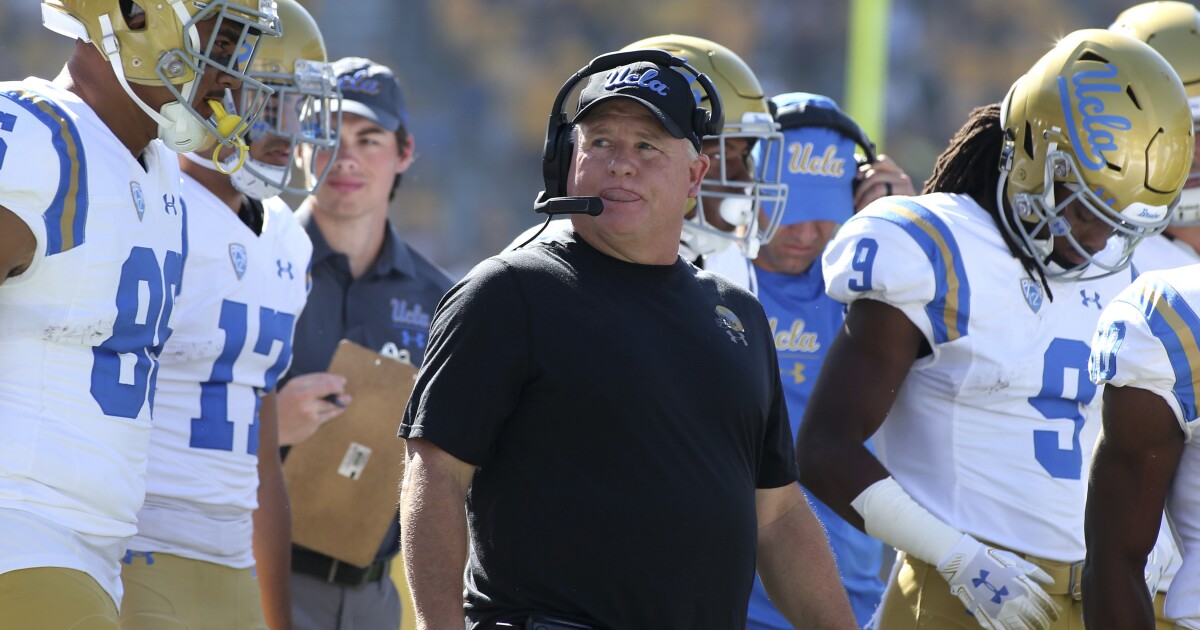 UCLA will open this most unusual football season with every player considered day to day.

Reserve defensive back Kenny Churchwell III has opted out of playing because of safety concerns related to the COVID-19 pandemic. Those who intend to forge ahead must pass daily viral screening tests before being allowed to practice. There’s also the specter of soft tissue injuries that have ravaged NFL and college rosters.

It has all left Bruins coach Chip Kelly wary of what he might hear about his team at any given moment.

“I’m excited when I get here early in the morning for work and our athletic trainer tells us that everybody’s good to go for that day’s workout,” Kelly said Wednesday afternoon during a Pac-12 Conference media day held via Zoom. “ … Any opportunity we get to play football I think we’re very, very grateful.”

That means UCLA could consider itself 1-0 just by playing its season opener Nov. 7 against Colorado in Boulder. The Buffaloes are expected to open training camp Friday, one day after local health restrictions barring college-age adults from gathering are scheduled to be lifted.

Elsewhere, NFL and college games continue to be canceled or postponed amid a rash of positive tests for COVID-19, forcing coaches to adjust expectations about completing every game on their schedule.

“I just have my fingers crossed that we can play on the 7th,” Kelly said.

The Bruins continue to take a graduated approach, opening training camp Friday roughly two weeks after they were allowed to resume lifting inside their weight room. Previously, players had to use whatever equipment coaches could drag onto the practice field because of restrictions that prohibited working out indoors.

Kelly acknowledged that he has not been able to fully assess his players before the start of formal practices. Some appear more ready than others based on a hodgepodge of equipment available to them while they spent months at home before returning to campus this summer.

“Friday will be kind of an eye-opener for all of us in terms of kind of where we are,” Kelly said. “They may be a little bit behind from a strength standpoint, but we think we’ve got four weeks to try to catch up there. So we’ll see. It’s kind of the great unknown, but that’s the fun part.”

There are only two certainties heading into training camp. The Bruins will be without punter Collin Flintoft, who underwent unspecified surgery after the season was pushed back in August, and Churchwell, who has opted to sit out the season over safety concerns. Kelly said he empathized with Churchwell after the coach and his wife contracted the virus in March and a handful of players and coaches lost family members to the disease.

“You can get it at any time, you know, even if you are being extremely diligent with it,” Kelly said, “so you have to be extremely careful with it and it is real. It’s not a hoax.”

Touting the daily testing that his players will undergo, Kelly backed off his springtime stance that football would not be safe for players if it was not safe for fans to attend games. The coach said his players would be tested 10 times a week between daily antigen testing and three-times-a-week PCR testing that is more sensitive and reliable.

UCLA has avoided an outbreak of viral spread among its players, Kelly said, because of a relatively low incidence of COVID-19 in Westwood combined with players’ diligence in following safety protocols. The 1,816 tests the school has conducted for players, coaches and staff from all of its athletic teams since late June have yielded 16 positive results (0.88%).

The virus turned stories that normally would have carried media day into afterthoughts. UCLA has gone 7-17 under Kelly in his first two seasons and the media apparently doesn’t expect a rapid turnaround, the Bruins picked to finish fourth in the Pac-12’s South Division, ahead of only Colorado and Arizona.

Kelly will face another symbol of Bruins disappointment in the opener. Karl Dorrell, the new Colorado coach and onetime UCLA receiver who also coached the Bruins for five seasons, gets to play his alma mater. It will be a reversal of sorts, Dorrell facing UCLA at Folsom Field in his Buffaloes debut after having faced Colorado at the same stadium in his Bruins coaching debut.

“It’s kind of déjà vu and we flipped sidelines, right?” Dorrell said, crossing his arms with forefingers extended to illustrate the switch. “I was on one sideline with UCLA and now I’m on one sideline with Colorado, so that was an interesting dynamic that probably not many people in coaching would be, at least starting their first game in their first year. But I’m excited.”

The same could be said for Kelly, assuming the game actually gets played.

“Any game is good,” Kelly said. “Any football is good.”