OLD TOWN — High school football players around the state are trying to make the most of the limited opportunities afforded to them during this year of COVID-19.

For most, 11-player tackle football has been replaced by the 7-on-7 touch variety, a passing game popular during the summer in recent years.

OLD TOWN — High school football players around the state are trying to make the most of the limited opportunities afforded to them during this year of COVID-19.

For most, 11-player tackle football has been replaced by the 7-on-7 touch variety, a passing game popular during the summer in recent years. It’s a far cry from the more intense version typically played each autumn.

More than 120 seniors who share the goal of playing football in college have taken advantage over the last two weekends of a new opportunity to help them advance that cause. 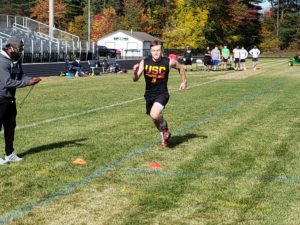 Bangor Daily News photo/Ernie Clark
FASTEST AT THE COMBINE — Foxcroft Academy senior Logan Martin extends toward the finish line of the 40-yard dash during a high school football combine Oct. 11 at Old Town High School. Martin had the fastest time of the day, 4.59 seconds, for the event held on the natural-grass surface of Victory Field.

They also will provide players video of their participation in those drills and other agility activities, which will replace traditional game films that aren’t available this fall because there are no formal games being played.

“This is huge for us seniors because I’m guessing all the guys here have dreams of playing college football,” said Logan Martin, a senior from Foxcroft Academy in Dover-Foxcroft. “This is a great way to showcase our talents and get coaches’ attention.”

Martin posted some of the top results among the 10 participants at the Old Town combine, which was hosted by the Maine Football Coaches Association and directed by longtime former Lewiston High School head coach and Bates College assistant coach Skip Capone.

“It’s been a blast,” Capone said. “We’ve probably tested, over the four sites, about 120 seniors. Considering the short notice and the craziness of this fall, and then when you consider that York and Oxford counties were yellow [under Maine Department of Education guidelines] at that point and York still is, we probably lost another 45 kids or more that would have been involved so we feel very good about the turnout.”

“I want to compete at the college level so this was a great opportunity,” he said. “It’s actually really important because for the seniors that don’t have an actual season this is where they can showcase their skills. Good thing I’m a junior, so I have one more year hopefully.”

The combines, which also were held Oct. 3-4 in Portland, Lewiston and Augusta, were free. Participants were encouraged to make a donation of up to $25 with net proceeds divided between the Maine Football Coaches Association and the Shriners Hospitals for Children, the beneficiary of the annual Maine Shrine Lobster Bowl Classic that was canceled in July due to the coronavirus.

“It’s about our kids,” Capone said. “The word got out that we wanted to do this, and we probably had 50 or 60 coaches who volunteered at the different sites.”

Drill results and video on each participant will be made available to college coaches around New England.

“The plan right now is for this to become a tradition for our association to take care of our upcoming seniors and try to help more kids in Maine get recruited,” Capone said.

When the next combines are held will depend on the sport’s immediate future in Maine and the possibility that a high school football season could be scheduled for next spring to make up for the lost opportunity this fall.

“If it stays business as usual and we go again in August, we would like to do something similar to this in May. This was a little late this year, but we didn’t have any options back in May because everything was shut down,” Capone said.

Zach Tubbs, a senior fullback and linebacker from Hermon High School, is painfully aware of the shutdowns, particularly those relating to his final season on the gridiron.

“Over time I’ve been committing a lot more to football, and [Hermon] coach [Kyle] Gallant told all the seniors on my team that there was a combine coming up to showcase your skills to coaches,” he said. “I thought if I want to play college football this is where I need to be.

“I was excited to come out here today, and I’m OK with how I did. I probably could have got a better 40 time but on those change-of-direction drills I actually did a lot better than I thought I would.”

Tennessee reportedly ahead of Alabama in battle for 4-star WR – atozsportsnashville.com