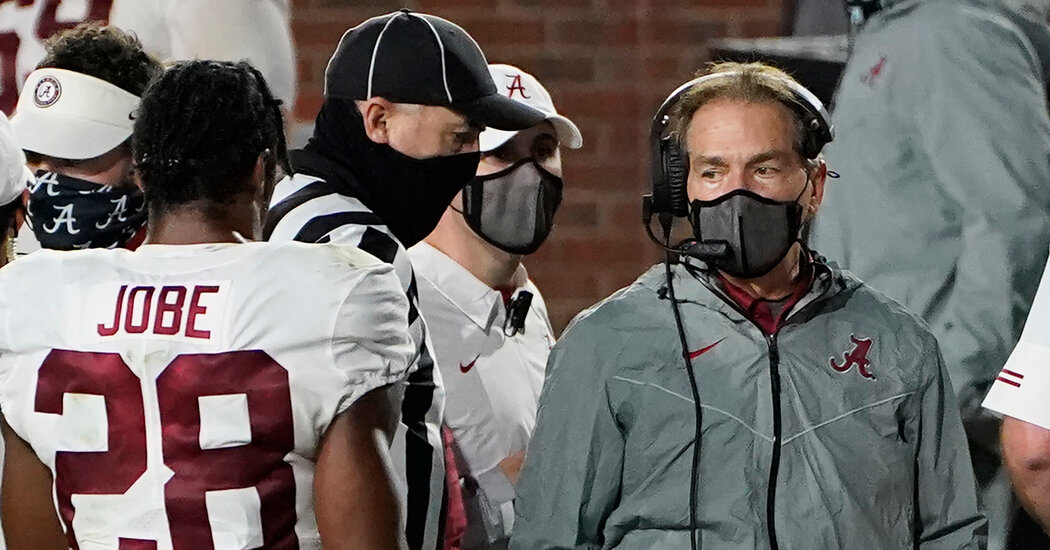 Nick Saban, the football coach at the University of Alabama and one of the most powerful figures in college sports, said Wednesday that he had tested positive for the coronavirus, deepening the pandemic’s turmoil throughout the Southeastern Conference.

Saban, whose second-ranked team is scheduled to host No. 3 Georgia on Saturday, said in a statement that he was asymptomatic and isolating at his home in Tuscaloosa. Alabama’s athletic director, Greg Byrne, also tested positive, the university said.

“Both immediately left the facility and went to their homes to self-isolate after receiving that information,” Dr. Jimmy Robinson, Alabama’s team doctor, and Jeff Allen, the football team’s head athletic trainer, said in a statement. “At this point in time, the positive tests are limited to those two individuals. All individuals who are considered high risk contacts have been notified and will follow quarantine guidelines.”

During a news conference conducted via Zoom on Wednesday night, Saban, seemingly alone and wearing a face mask around his neck, said that he had been “very surprised” by the positive result, which Alabama detected during its daily testing for its football program.

“I personally think I did a really good job of trying to manage my personal space,” Saban said. “And that would be what I’ve informed our players to try to do because you have to respect this disease and the spread of this disease.”

Saban, who is 68, suggested that he could have contracted the virus when Alabama visited Mississippi last weekend, echoing concerns from others in college football that travel may pose some of the greatest risks to the season.

Still, the announcement from Alabama, which had spent months saying vanishingly little about the spread of the pathogen within its athletic department, was a fresh shock to a league grappling with its most perilous week of virus-related crises. On Wednesday, the conference postponed Saturday’s game between Florida and Louisiana State after at least 21 Florida players and two assistant coaches tested positive for the virus. Florida said it would have had fewer than 50 scholarship players available for the game in Gainesville, Fla., which was below the league’s minimum of 53.

Earlier in the week, the SEC said a contest between Missouri and Vanderbilt would be delayed until December because of an outbreak at Vanderbilt.

But word that Saban, who has been an active public proponent of wearing masks and enforcing social distancing, tested positive may have far greater reverberations on the sport and the perceptions of playing it during the pandemic, in part because of the renown he has cultivated during his 14 seasons at Alabama.

During his tenure at the university — whose fans spent the years before he arrived in 2007 longing for the dominant teams they had known under Bear Bryant, who died in 1983 — Saban has won five national championships.

Now, ahead of a game that will go far to determine whether Alabama reaches another College Football Playoff, Saban will be working from home. Steve Sarkisian, the Crimson Tide’s offensive coordinator and a former college head coach, will take on a greater role in preparations for the game against Georgia.

Saban swiftly pivoted to coaching practice by Zoom, and one of Alabama’s managers was tasked with holding a phone while Alabama worked out on Wednesday.

“If I wanted a play repeated, I said ‘I want that play repeated, so and so messed up,’” Saban said, wryly noting later that Alabama had run “a lot worse practices when I’m there.”

The pandemic has disrupted college football repeatedly as the sport plowed ahead this fall. So far, 29 games in the Football Bowl Subdivision, college football’s premier tier, have been postponed or rescheduled for virus-related reasons. A handful of head coaches, including Kevin Sumlin of Arizona and Mike Norvell of Florida State, have tested positive, as have hundreds of players and staff members nationwide.

The SEC’s commissioner, Greg Sankey, warned coaches and athletic directors in recent weeks to follow virus protocols fervently or risk derailing the season, which some critics have said should not be happening at all. Sankey wrote in a memo last week that teams would “need to be fully attentive every day to reach the objective of a healthy and complete season.”

Clusters within athletic departments have been part of an even broader problem with cases on university campuses across the country. Alabama has had nearly 2,800 cases campuswide since March, many of them reported in the fall semester as students returned for classes.