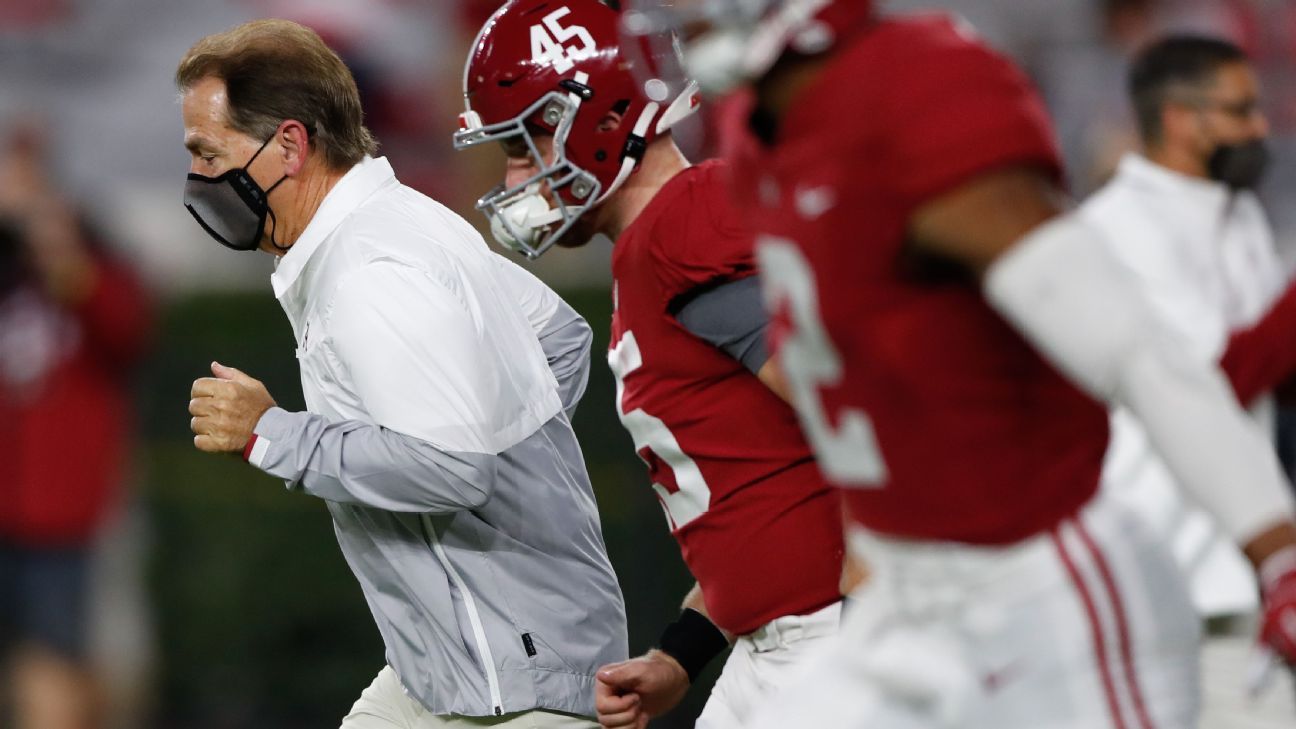 Football coach Nick Saban was on the Alabama sideline for Saturday night’s showdown against No. 3 Georgia after he was cleared to return earlier in the day following his third consecutive negative test for COVID-19.

The No. 2 Crimson Tide beat the Bulldogs 41-24 and have now won the past six meetings with Georgia, including a 3-0 record against Saban’s former defensive coordinator, Kirby Smart. The first two came in the January 2018 national championship game and the SEC championship game the following season. This was the first one that didn’t go down to the wire.

Sources told ESPN that Saban was informed he had been cleared to return a little before 12:30 p.m. ET, and he immediately left his home with a state trooper to go directly to the team hotel and was able to join meetings prior to 1 p.m. ET.

Saban said it was “very emotional” returning to the team prior to kickoff.

“I think I gained a lot of respect thinking I had this,” he said after the game. “When they tell you you tested positive, that wasn’t a good feeling.”

“It was very crazy,” Alabama quarterback Mac Jones said. “We were in our little quarterback meeting and he just showed up.”

Alabama team physician Dr. Jimmy Robinson said in a statement that Saban had negative polymerase chain reaction (PCR) tests at 7 a.m. on Thursday, Friday and Saturday following an initial positive test Wednesday. The school added that two additional PCR tests, from Thursday and Friday, were taken “out of an abundance of caution” and also were found to be negative at a separate lab.

“Due to the fact that Coach Saban has remained completely symptom-free and had five negative PCR tests, split between two separate labs, the initial test from Wednesday is considered a false positive under the SEC protocols,” Robinson said. “In accordance with the SEC Return to Activity and Medical Guidance Task Force Protocol and with the approval of The University of Alabama System Health and Safety Task Force, Coach Saban is medically cleared to safely return to activity effective immediately.”

Saturday morning’s test was flown to an SEC-approved lab in Mobile, Alabama, for a quick turnaround.

Robinson said in his statement that university officials had been in constant communication with the conference office throughout the process to ensure compliance with all applicable protocols.

SEC guidelines state that if an individual has three successive negative PCR tests through an SEC-appointed lab, each 24 hours apart, and remains asymptomatic, the initial test would be considered a false positive and the individual may be released from isolation and medically cleared to return to athletics activities.

On Friday, Alabama said Saban’s initial positive test result came from an outside lab that the university has used to supplement the SEC-mandated testing.

A source close to Saban told ESPN that he felt from the beginning that the initial test was a false positive because he never had any symptoms or experienced a fever.

“He didn’t even have a sniffle,” the source said.

Saban wasn’t at the football complex for the second half of the week, but he conducted team and staff meetings via Zoom and watched the practices on a live feed from home — with a high-angled camera view — and communicated with coaches by cellphone if he wanted some part of practice redone.

One staffer told ESPN that Saban might not have been there physically, but that he was definitely there in spirit and didn’t miss anything from home.

“You didn’t see him out there, but it’s almost like he never left,” the staffer said.

Saban said that ultimately, he was most proud of how his players handled the distraction of him being away.

He said he told them he hadn’t made a tackle or caught a pass in 40 years — so how much of a difference would he make anyway?

“I think they were ready … to play this game whether I was there or not,” Saban said.

Alabama athletic director Greg Byrne, who also tested positive for COVID-19 on Wednesday, on Saturday posted on Twitter that he he is “feeling pretty good,” but that he is still at home following protocol. He did not attend the game vs. the Bulldogs.

Thanks for all the prayers & well-wishes the last few days! Feeling pretty good 👍🏼.

At home following protocol (while watching 🏈 of course), so I’ll miss being at the game tonight. Should be a great atmosphere! Please continue to mask up & socially distance.#RollTide 😷🐘

Saban told ESPN’s College GameDay that Alabama conducted 240 tests in the past two days and all were negative. Saban said he tested negative Sunday, Monday and Tuesday before the positive test on Wednesday.

ESPN’s Alex Scarborough and The Associated Press contributed to this report.

Who are the Springfield area’s biggest high school football surprises so far in 2020? – News-Leader