The sixth week of the NFL got off without a hitch even as reports of positive coronavirus tests ran rampant about the league in the days leading up to Sunday’s slate.

The New York Giants and Atlanta Falcons both picked up their first wins of the 2020 season while the New York Jets remained the only winless team in the league after getting shellacked by the Miami Dolphins.

Fans will be treated to two Monday night games with the Kansas City Chiefs taking on the Buffalo Bills and the Dallas Cowboys taking on the Arizona Cardinals.

Here’s how the games shook out. 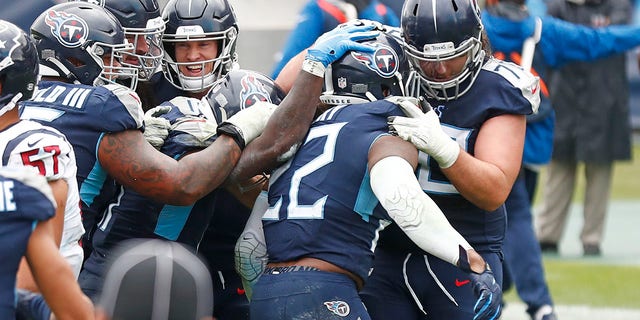 Tennessee Titans running back Derrick Henry (22) is mobbed by teammates after Henry scored the winning touchdown against the Houston Texans in overtime of an NFL football game Sunday, Oct. 18, 2020, in Nashville, Tenn. The Titans won 42-36. (AP Photo/Wade Payne)

The Titans got a game-tying touchdown from Ryan Tannehill to A.J. Brown and then a game-winner from Derrick Henry in overtime to stay undefeated. Henry also rattled off a 94-yard touchdown run to keep Tennessee alive. 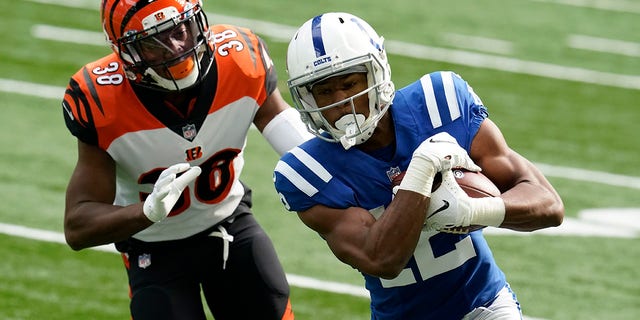 The Colts were down 24-7 in the second quarter and came roaring all the way back to win 31-27. Philip Rivers had three touchdown passes in the win. Joe Burrow had 313 passing yards but no touchdown passes. 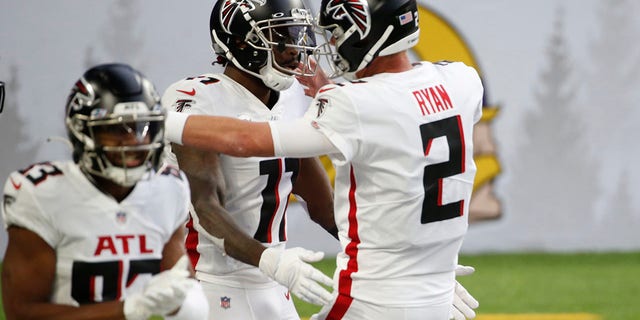 The Falcons finally got their first win of the season. Matt Ryan had four touchdown passes and Julio Jones had his first touchdown catch in the win. The Vikings and Falcons are now 1-5.

FALCONS RESPOND TO QUINN FIRING WITH 40-23 WIN VS. VIKINGS 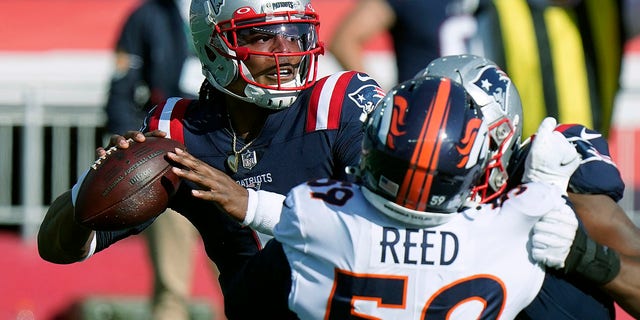 The Broncos nearly handed the Patriots the ball game late. Drew Lock’s two interceptions put the Patriots in position to possibly win the game but they couldn’t breakthrough. Brandon McManus had all of the Broncos’ points.

PATRIOTS FALL TO UNDER .500 WITH LOSS FOR FIRST TIME SINCE 2002, SNAP IMPRESSIVE STREAK 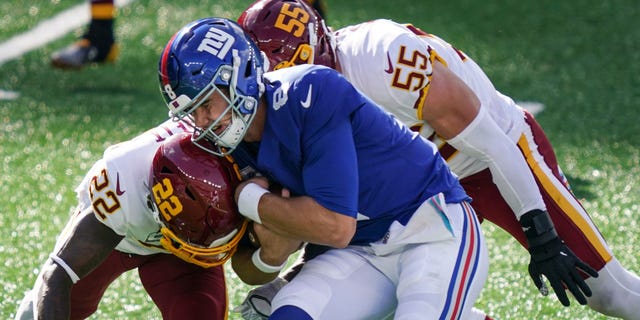 Tae Crowder had the game-winner, returning a fumble for a touchdown for the Giants. Daniel Jones had one touchdown pass and an interception in the game. Both the Giants and Washington are now 1-5.

GIANTS DEFENSE BAILS OUT OFFENSE AFTER LACKLUSTER PERFORMANCE VS. WASHINGTON 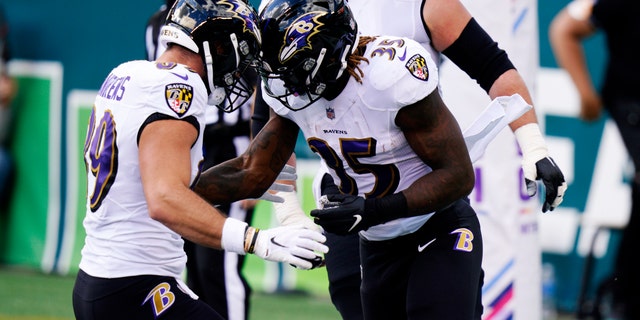 Baltimore Ravens’ Gus Edwards (35) celebrates with Mark Andrews (89) after scoring a touchdown during the first half of an NFL football game against the Philadelphia Eagles, Sunday, Oct. 18, 2020, in Philadelphia. (AP Photo/Chris Szagola)

The Ravens held off a charging Eagles team in the end. Lamar Jackson had 186 passing yards and a touchdown pass. Carson Wentz had two touchdown passes despite calls for Jalen Hurts to replace him.c 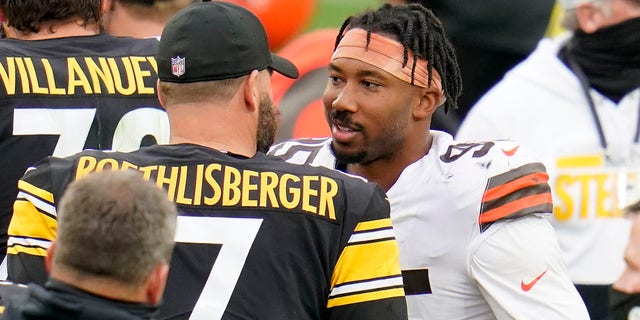 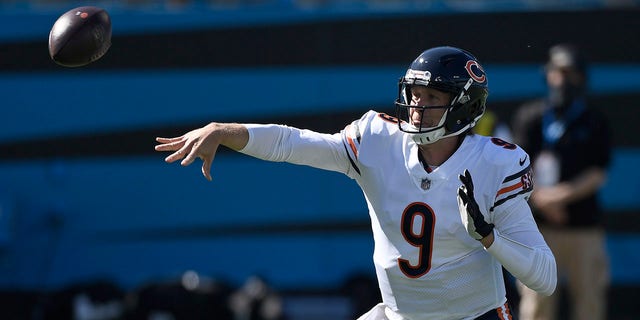 The Bears held strong against the Panthers to move to 5-1. Nick Foles had a touchdown pass to Cole Kmet and the defeated picked off Teddy Bridgewater twice, including one time to seal the game. 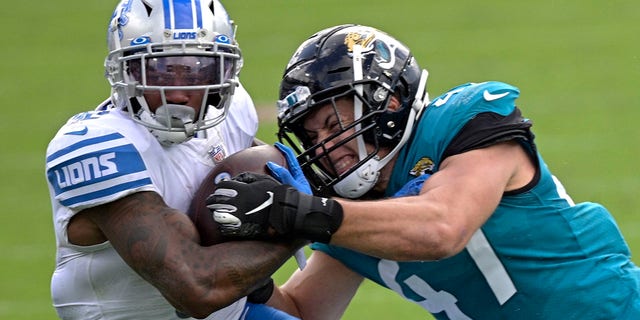 The Lions picked up their second win, running over the Jaguars, 34-16. Rookie running back D’Andre Swift ran for 116 yards and two touchdowns. Adrian Peterson also had a touchdown in the win. 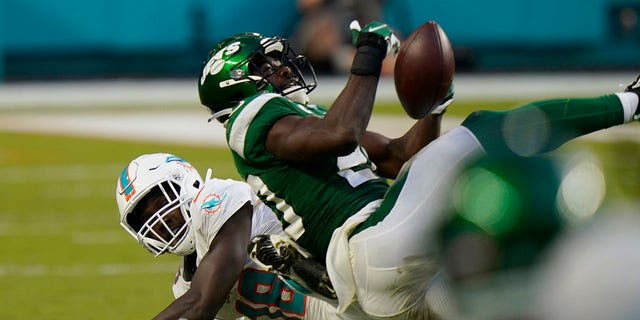 The Dolphins got three touchdown passes from Ryan Fitzpatrick and great defensive play from a lowly Jets team that still hasn’t won a game. At least New York had a good highlight with Marcus Maye intercepting a ball with his butt. 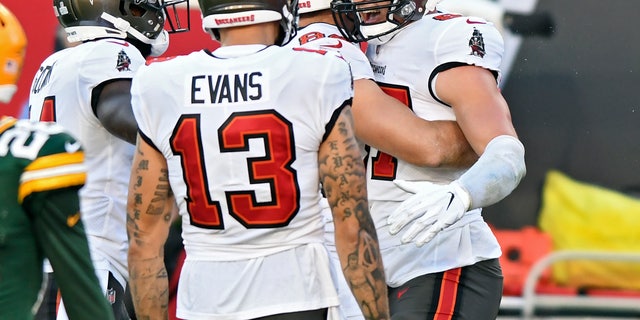 Tampa Bay Buccaneers tight end Rob Gronkowski (87) celebrates with teammates, including Mike Evans (13) after catching a touchdown pass against the Green Bay Packers during the first half of an NFL football game Sunday, Oct. 18, 2020, in Tampa, Fla. (AP Photo/Jason Behnken)

Tampa Bay scored 38 unanswered points to top Aaron Rodgers and the Packers. Tom Brady had three touchdown passes, including one to Rob Gronkowski. It was the tight end’s first TD catch since 2018. 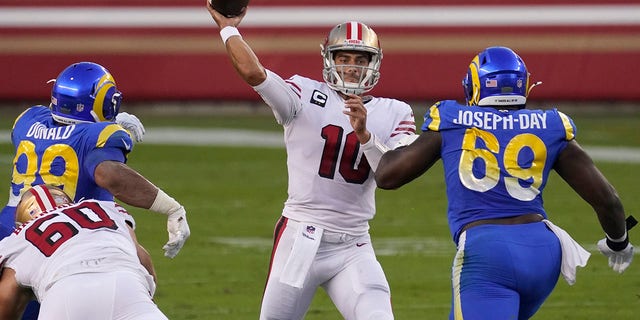 Jimmy Garoppolo threw three touchdown passes and looked like his old self out there for San Francisco. The 49ers took down the Rams in an important divisional matchup. Jason Verrett also had his first interception in quite some time.