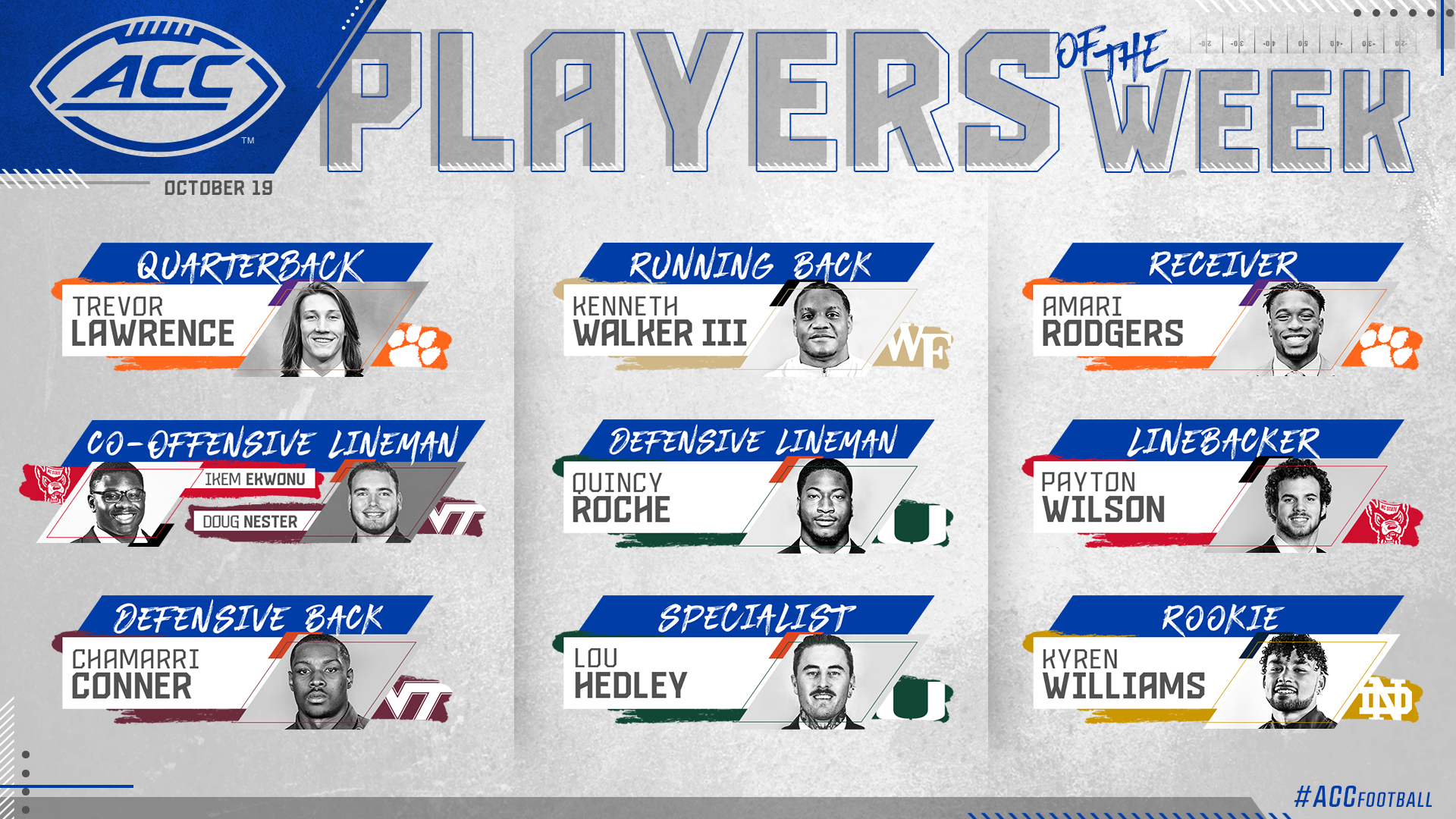 GREENSBORO, N.C. – The Atlantic Coast Conference Football Players of the Week have been recognized following their standout performances in last weekend’s games.

The selections are determined by a vote of a 16-member media panel. The following are this week’s honorees:

QUARTERBACK – Trevor Lawrence, Clemson, Jr., QB, Cartersville, Ga.
Completed 24-of-32 passes with career highs in passing yards (404) and passing touchdowns (five) in Saturday’s 73-7 win over Georgia Tech • Posted his first career 400-yard passing game and the 10th by a Clemson quarterback all-time, as well as the first game with at least five passing touchdowns by a Clemson quarterback since Deshaun Watson’s six-touchdown performance against South Carolina in 2016.

RECEIVER – Amari Rodgers, Clemson, Sr., WR, Knoxville, Tenn.
Posted his third career 100-yard receiving game in the Tigers’ win over Georgia Tech, finishing with a career-high 161 yards on six receptions • Caught two touchdowns for his second multi-touchdown game of the season and the fourth of his career.

CO-OFFENSIVE LINEMAN – Ikem Ekwonu, NC State, So., LT, Charlotte, N.C.
Logged 72 gradable snaps while playing left tackle in the Wolfpack’s 31-20 win over Duke after playing the previous four games at right guard • Had five knockdown blocks on the day to bring his season total to 26 • Graded 90 percent for the night and did not allow a hurry, a hit or a sack.

CO-OFFENSIVE LINEMAN – Doug Nester, Virginia Tech, So., RG, Huntington, W. Va.
Helped the Hokies rush for 350 yards in Saturday night’s 40-14 win over Boston College, the team’s third game of 300 or more yards on the ground in 2020 • Virginia Tech averaged 8.5 yards per attempt versus Boston College • The offensive line allowed just a single sack against the Eagles.

DEFENSIVE LINEMAN – Quincy Roche, Miami, Sr., DE, Randallstown, Md.
Turned in the best performance of his Miami career Saturday afternoon, delivering a dominant outing in the Hurricanes’ 31-19 win over Pitt • Finished with 4.0 tackles for loss – a season high for a Miami player • Forced a fumble and wore the turnover chain for the first time this season on a strip-sack of Pitt QB Joey Yellen • The nation’s active sacks leader, Roche finished with a season-high seven tackles in the win and helped the Hurricanes hold the Panthers to 22 rushing yards.

LINEBACKER – Payton Wilson, NC State, So., LB, Hillsborough, N.C.
Pulled down two interceptions in NC State’s 31-20 win over Duke on Saturday • First Wolfpack player with a pair of interceptions in a game since Jerod Fernandez picked off No. 1 Florida State twice in the 2014 matchup • Wilson’s second pick of the night came with the Wolfpack down 20-14 in the third quarter and set up the go-ahead touchdown • Finished with a team-high 19 tackles, the most for a Pack player since Earl Wolff had 19 vs. Clemson in 2012 • Currently leading the ACC and ranks sixth in the FBS in tackles per game (11.0).

DEFENSIVE BACK – Chamarri Conner, Virginia Tech, Jr., NB, Jacksonville, Fla.
Led the Hokies with 11 tackles in Saturday night’s 40-14 win over Boston College • Registered a half-tackle for loss while breaking up a pass and forcing a quarterback hurry • Forced a fumble for the second time in his career, one of five turnovers created by the Virginia Tech defense.

SPECIALIST – Lou Hedley, Miami, Jr., P, Mandurah, Australia
Helped Miami hold the upper hand in the battle for field position in Saturday’s win over Pitt • Boomed a season-long 60-yard punt in the first quarter • Averaged 51.7 yards per punt, tying Matt Bosher (2007) for the best mark by any Miami punter in the last 20 years for a single-game average with a minimum of six punts • Pitt totaled just 16 punt return yards on the afternoon.

ROOKIE – Kyren Williams, Notre Dame, R-Fr., RB, St. Louis, Mo.
Rushed for 127 yards on 25 carries in Saturday’s 12-7 win over Louisville • Reached the 100-yard rushing plateau for the third time in four games this season • Now ranks second in the ACC and sixth in the FBS in rushing yards per game (121.5) and third (ACC) and eighth (FBS) in all-purpose yards (151.2) • Saturday’s 127 rushing yards came against a Cardinals’ defense that had only allowed opposing teams 156.8 rushing yards per game entering the matchup with the Irish • Also blocked on Louisville’s blitz packages, allowing QB Ian Book to rush for 47 yards, as well as buy time in the pocket.