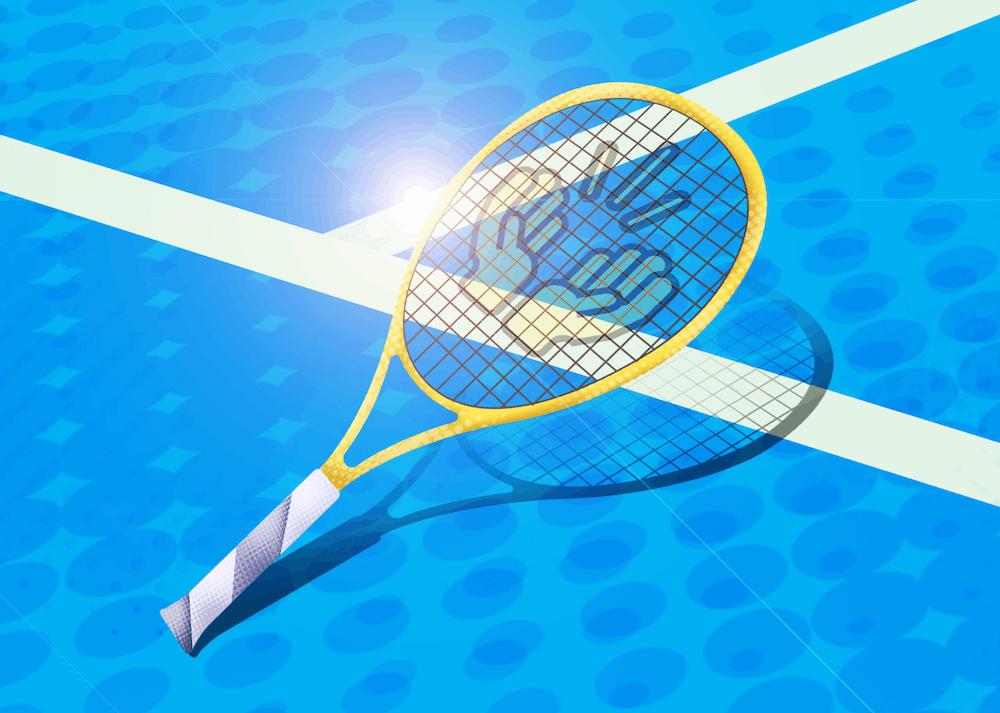 “Even in face of the highly competitive sport of tennis, religion has helped Ilze Hattingh find focus inside and outside of the court.” Illustration published on Monday, Oct. 19, 2020.

For ASU senior tennis player Ilze Hattingh, religion has become part of her daily routine. But in 2016, a year before she came to ASU, Hattingh was about to walk away from the sport.

Hattingh grew up attending a Christian church back home in South Africa but had lost track of her faith. Tennis had defined Hattingh as a person, and she relied on her performances to keep her content.

The sport had consumed her to the point where she lost her identity.

“I felt like I had a label on my forehead that said tennis player,” Hattingh said. “It completely controlled me without me even realizing it.”

She met a psychologist who helped her rediscover Christianity and her identity before she came to ASU, something she attributes to helping her mentally on the court.

“I’m a very faithful person and rely heavily on my religion,” Hattingh said. “I just make sure I set time aside for that, which helps me prepare mentally every day.

“My religion has helped me not to be afraid of anything, losing in tennis or not having great results.”

Since coming to ASU, Hattingh listens to worship music before games and practices. And when COVID-19 emerged, the senior spent more time concentrating on her religion.

“As soon as COVID struck, I wanted to become part of a group and a community, but a community that speaks my language and understands me,” Hattingh said. She said her boyfriend runs a young adult Bible study group that meets virtually every Wednesday.

Throughout the height of the pandemic, Hattingh practiced her religion by listening to worship music by artists like Phil Wickham.

She also tunes in online on Sundays to her Dutch Reformed Church services back home and listens to motivational speakers such as Billy Alsbrooks to maintain a positive attitude every day.

Hattingh uses her religion to handle the challenges the pandemic presents and the unknowns it continues to create. She said it has kept her grounded and motivated.

“There is no end to the amount of talking people need to do to be breathing out this moment,” ASU Counseling Services director and HIPAA Privacy Officer Erin Trujillo said.

Hattingh’s determination has rubbed off on her teammates as well.

Last year, Hattingh was a leader for the Fellowship of Christian Athletes/Athletes in Action at ASU and invited her teammates to join her.

“I had never known about it until she brought it up to me,” redshirt senior tennis player Sammi Hampton said. “That was really inspiring to me that she just did that with so much on her plate already.”

As seniors, Hattingh and Hampton became close friends last year when they roomed together.

Hattingh’s openness to share her faith has shaped her as a person. Hampton noted that Hattingh’s presence brings her spirits up.

“I just love the way she makes me feel, there’s something about her that always uplifts me,” Hampton said. “It’s not just her presence; she always works hard, she always shows up.”

The last seven months have forced Hattingh to adapt to the uncertainties that cloud her everyday life.

But thanks to her faith, the senior feels as if she can conquer anything.

“If you look back on your life, all the things that have overwhelmed you in the past, it’s always been okay in the end,” said Hattingh.

No. 2 Women’s Tennis preview: at No. 44 Kansas and at K-State – University of Texas Athletics – TexasSports.com