Rugby
November 2, 2020 Admin 0 Comments
Palmer penned an emotional column in the Sydney Morning Herald on Friday about the mental health challenges he faced while confronting his sexuality and how he hopes to inspire others in the future.

“I despised myself and the life I was living,” Palmer said of the season he made his international debut, when he was also vice-captain of Super Rugby side the ACT Brumbies.

“I was trapped in a false narrative and could see no way out. Most nights, I cried myself to sleep … I fantasized about disappearing, changing my name and starting my life all over again. It is not an exaggeration to say my own death felt preferable to anybody discovering I was gay.”

Palmer said moving from Australia to play in France offered a “degree of introspection” that proved to be “transformative.”

Realizing something had to change, he visited a friend in London to reach out for help — the first person he had ever spoken to about his sexuality.

“I don’t have a satisfying answer to why I had to self-implode to finally reach out to someone and make these changes to my life,” said Palmer.

“It wasn’t that I didn’t think my friends and family would accept me for who I was, I never had any doubt about that, they were always very loving and supportive.

“Rather, I thought they would feel like I had deceived them, that I was somehow untrustworthy.

“I had tactics for navigating certain topics and avoiding others. I became aggressive and defensive when I felt like I was losing control of a situation. The longer I allowed this to go on, the harder it was to reverse the cycle.

“Underlying this was also a deep feeling of shame that is hard to describe.” 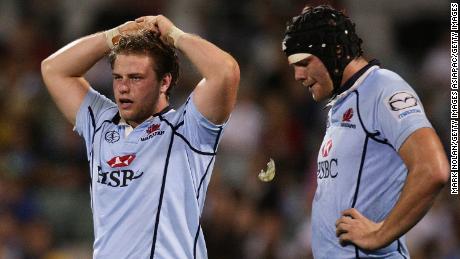 ‘We need to be better’

Midway through 2014, Palmer left France and enrolled at The Australian National University in Canberra.

Having retired from playing rugby, he is currently undertaking a PhD studying cellular mechanisms of brain function and also works as a coach for the Brumbies.

“It sickens me to know that in the year 2020 there are still people torturing themselves the way I was, both in and out of sport — we need to be better,” said Palmer.

“If this piece can prompt a conversation, make space for people to feel more comfortable being themselves, or can help someone better understand what a loved one may be going through, it will have been a success.”

Palmer added that part of the motivation behind coming out was the saga surrounding Israel Folau, the former rugby union player who was sacked by Rugby Australia for an anti-gay social media post.

Folau, a devout Christian, was dismissed for an Instagram post in which he said “hell awaits” gay people.

Rugby Australia later acknowledged that Folau “did not intend to hurt or offend” people and the now-rugby league player said he felt “vindicated” by the settlement he reached with the governing body.

Palmer has received wide praise from the rugby community for talking so openly about his sexuality and about his decision to come out.

“Dan Palmer is one of the best men I got to know and play alongside in rugby. Incredibly hard working and an actual genius,” said former Australia captain David Pocock, who announced his retirement from rugby last week.

“I believe sport is at its best when it’s challenging society to be more inclusive. A good reminder of how much more work there is to do.”

Rugby Africa announces establishment of Referee Committee – Around the Rings