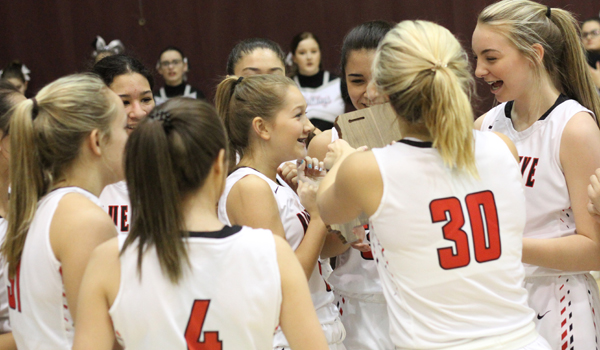 By Kai Raymer (For OzarksSportsZone.com)

Fast, feisty and locked in on defense.

That formula has carried the Blue Eye Lady Bulldogs to the state playoffs the past three seasons, including the program’s first state final four berth last March.

Blue Eye, a three-time defending district champion in Class 2, looks to make another postseason run in 2020-21 with an undersized but athletic lineup taking the floor.

“Our team will be similar to the one we had last season,” said Blue Eye coach Ken Elfrink. “We always hang our hat on defense and will once again (play) hard-nosed, pressure defense.”

Avery Arnold was Defensive Player of the Year in the Southwest Central League (SWCL) last season. The 5’7” guard averaged nearly 12 points per game along with three rebounds, 2.5 assists and two steals.

“She can attack the rim and shoot it,” Elfrink said. “She’s never afraid of a challenge and always steps up to defend the other team’s best offensive player. She’s a big-game player with a high motor and competes at a high level.”

“Riley’s a very skilled player, can handle it, shoot the 3 and is also not afraid of any challenge,” Elfrink said. “She’s a tough kid who plays and competes at a high level.”

Warren (6.8 ppg, 3.1 ppg) plays bigger than her 5’4” frame. Elfrink said the junior wing could have a breakout season.

“She’s a great leaper and rebounder,” Elfrink said. “She’ll defend in the post but has the ability to defend guards. She’s very versatile and, offensively, has the potential to be a special player.”

Junior guard/forward Gracyn Fairchild joins the starting lineup after playing on JV last season. At 5’7” Fairchild brings a strong presence around the basket but can also step outside and shoot.

“She’s a competitor who can shoot the 3 and attack the rim,” Elfrink said. “She gives us more rebounding and defense on the interior as well.”

“She plays bigger than her size,” Elfrink said. “She is a great rebounder and tough kid who has a nose for the basketball.”

With a lineup of players around 5’4” to 5’7”, expect the Lady Bulldogs to employ their usual aggressive, up-tempo style.

“We will be very athletic with several girls able to shoot. Our skill set will be better this year and we expect to cut loose and create as many possessions as possible,” Elfrink said. “The keys to our success will be depth and the changing up of our defenses.”

The Lady Bulldogs finished 27-5 overall and made the state final four for the first time in program history. Blue Eye tied for third after losing to Tipton in the semifinals.

Patton was a three-time all-state selection and one of the best players in program history. She’s now playing at Evangel University in Springfield.

Spinning is a transfer from Branson who brings shooting and interior defense to her new team.

“She gives us some much-needed depth on the bench,” Elfrink said.

George is one of Blue Eye’s tallest players at 5’9”. As a freshman last season, she played mostly JV with some occasional varsity action.

“She’s a good athlete who will give us an inside presence, especially in defending the post and rebounding,” Elfrink said.

“Our outlook for the season is high,” Elfrink said. “We’ll have the freedom to let the girls just play and use their athleticism, quickness and speed. This should be a fun group to coach and watch.”

UK Basketball Recruiting: Who will be Wildcats’ next basketball commitment? – A Sea Of Blue