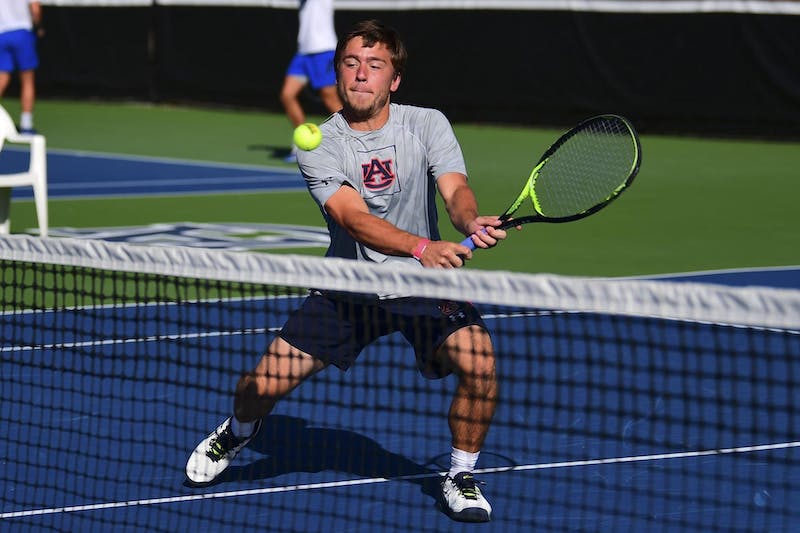 AUBURN, Ala. (EETV) – The Auburn men’s tennis team finishes its fall schedule in Athens, Ga., this weekend at the 53rd Southern Intercollegiate Championships Friday through Saturday.

The schools will get to play singles and doubles each day for their lineups. At each session 10 singles matches will be played, and up to five doubles matches.

“We’re really excited that we’ve been able to get to this point in the fall season,” Auburn head coach Bobby Reynolds said. “To be able to play three events, and to have a full team for all three events, is a real testament to our team and how they did what was asked of them to put tennis and their teammates first. It’s a credit to the SEC teams that we’ve reached this point from what things looked like four months ago.

“Facing Georgia for the first time this weekend, and be able to play again against Florida and Ole miss, will provide us with great competition. We’re going to change up some of the double pairings, which is a plus in that it gives coaches good information for the spring.

“Our guys have worked very hard on and off the court, and they’ve had a lot of success in the first two tournaments. They’re starting to believe and see through those results the benefit of everything we’ve been working on and telling them.”

Friday at 9 a.m. CT Auburn will face Georgia at the Henry Field Stadium courts. The Tigers will go against Ole Miss on Saturday at 9 a.m. CT on the McWhorter Courts and will finish the weekend off against Florida on Sunday morning.

Attendance will be limited to guests of the team members via pass list. Fans on the pass list need to be socially distant throughout the stadium.

Another Top U.S. Tennis Tournament Is Postponed Because of the Coronavirus – The New York Times