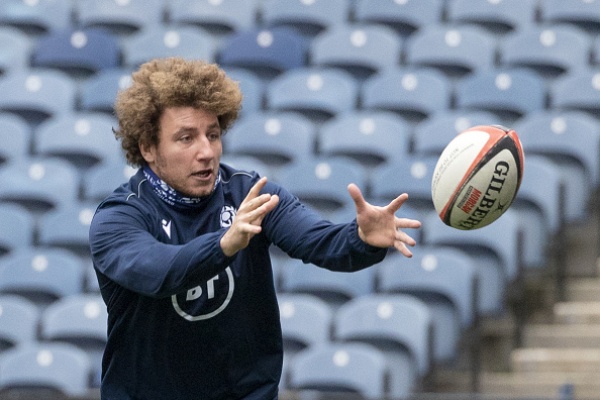 Duncan Weir ‘s return to the Scotland number 10 jersey in Florence on Saturday is ‘testament to his character’, according to national team boss Gregor Townsend.

The Worcester Warriors stand-off will win his 29th cap against Italy and is one of four changes to the side that beat Wales on October 31, with Sam Johnson, Duhan van der Merwe and Stuart McInally also coming into the starting XV.

Scotland team named for @autumnnations clash against Italy this Saturday – live on @primevideosport.

Weir last started for Scotland against Ireland in the 2016 Six Nations, and his only involvement since Townsend succeeded Vern Cotter as Scotland coach came with a two-minute cameo against France in March.

The 29-year-old is back thanks to injuries to Finn Russell and Adam Hastings, and Townsend believes he will do a job for Scotland as they look to extend their winning run to five games.

Duncan Weir in good form ahead of Scotland return

“It’s testament to his character,” Townsend said on a Zoom call this afternoon (Wednesday).

“The experience he’s gained from playing in different environments has helped him. He’s playing great rugby and it’s a bonus for us we can call on someone like him with the injuries we have at fly half.

“The experience he has had playing for different coaches and he is in his late 20s playing in a position where you do learn through your career. For instance what different pictures you see in defence and what skills he has picked up on over the years.

“He is playing great rugby and it is a bonus for us that with Finn and Adam injured we can call on somebody playing at Premiership level and is confident at what he is doing.”

The change at hooker explained

McInally replaces Fraser Brown, who picked up a head knock in training on Tuesday, but Townsend revealed that was a change they were going to make anyway. George Turner comes onto the bench.

“Fraser picked up a head injury after a scrum collapsed. He had a headache so that rules him out. We hope he will be available for next week but he will need to go through the [return to play] protocols.

“Stuart McInally was going to start this weekend anyway.

George Turner has been in excellent form when he’s had the chance at Glasgow. His last game for us was against Russia [at the Rugby World Cup] and he scored a couple of tries and had a very good game. We have two very hookers to come in and hope all three are available next week.

George Horne is also not involved after suffering a toe injury in training, with Sam Hidalgo-Clyne set for his first cap since the 2018 summer tour win in Argentina.

“George Horne got a toe injury yesterday, the scan results came back and we hope he’ll be available next week, we just have to see if he gets over the inflammation. He’s not done any long-term damage.”

A chance to build momentum

Scotland travel to Italy having won their last four, and with a winning record against Italy that stretches back to 2015, and Townsend is keen to see his side build on the momentum they have gathered.

“I felt we were building some momentum before lockdown, so it’s good to see them build on that. It’s a new tournament, a new team and the challenge is to keep building on this momentum.

“We feel privileged to be back playing rugby after everything that’s happened, it’s a real thrill for us. The Six Nations is just around the corner and this is a chance to see where we are after what’s been a positive period.”