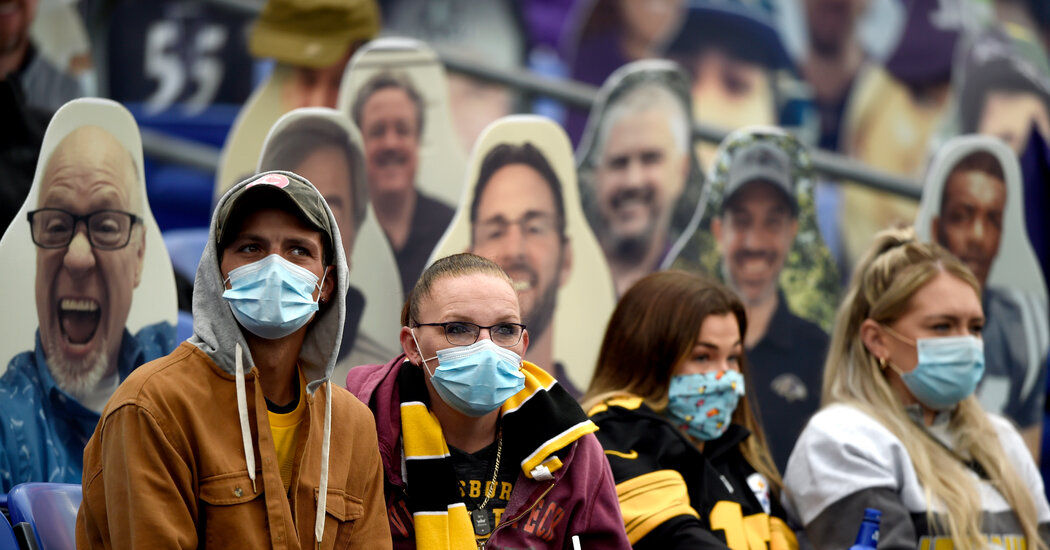 Before the N.F.L. season began, one of the big questions the league faced was whether a close-contact sport like football, with 22 players on the field and dozens more on the sidelines along with coaches and trainers, could avoid a coronavirus outbreak stemming from a game.

That has largely been answered: yes.

Yet as the season passes the halfway mark, and more than 200 people on or affiliated with teams have been infected, the N.F.L. has been grappling with controlling the virus not just on the field but off it, sometimes far from it. And players are far from the only problem.

Between Aug. 1 and Nov. 7, 218 out the nearly 8,000 players, coaches and personnel have been infected, with players making up about one-third of the positive cases. Only one player is known to have been hospitalized, and most players have had mild symptoms and returned after their mandatory isolation.

League officials have said there is no evidence of players transmitting the virus on the field despite the close contact between teams, and there has been little transmission inside team facilities, where social distancing guidelines are in place.

Instead, the 78 players and the 140 staff members who support the teams, including coaches, trainers and employees, have picked it up outside the facilities, either when they congregated in restaurants or shared car rides, or came in contact with people outside the N.F.L., like nannies.

In response, the N.F.L., which has had to postpone but so far not cancel games, has expanded testing, and adopted and strengthened rules for isolating infected people or those in close contact with them. Coaches and players have been fined tens of thousands of dollars for failing to wear protective equipment properly on the field and outside team facilities.

“Tip of the hat for their success so far, but it’s something that requires consistent vigilance,” said Dr. Michael Saag, an infectious diseases expert at the University of Alabama, Birmingham. “These mitigation strategies are tenuous. They are guesstimates in terms of what will work. If I were the N.F.L., I wouldn’t be too comfortable, because all it takes is one super spreader event to shut down a facility or two.”

League executives say their measures are working because thus far few infections have been transmitted inside a team complex. The biggest scare came in Tennessee, where two dozen Titans players, coaches and staff were infected in October, though the league has not disclosed specifically what it learned about the origin of the outbreak.

But in recent weeks, the number of positive cases on teams from Green Bay to Miami to Pittsburgh has jumped, forcing players, including star quarterbacks like Ben Roethlisberger and Matthew Stafford, to stay away from team facilities because they were in close contact with teammates or team personnel who tested positive. Five coaches on the Dolphins skipped the team’s trip to Arizona last weekend. Four offensive linemen on the Las Vegas Raiders had to quarantine for five days after coming in contact with right tackle Trent Brown, who tested positive for the virus.

“All of us are aware there has been an uptick in cases that we’ve seen in the N.F.L. last week,” said Dr. Allen Sills, the league’s chief medical officer. “That’s very reflective of what’s going on in the country as a whole. It’s not a surprise, and it’s something we’ve been preparing for.”

After practice every day, coaches, team personnel and players leave their team facilities and mix in their communities, including places where infections are surging. In Minnesota and Wisconsin, for instance, the average number of cases has grown fivefold since Sept. 6, the first Sunday of the season. The increase in infections has risen even faster in Colorado and Illinois, home to two other N.F.L. teams.

Some players continue to put themselves, and their teammates, at risk. Daniel Jones and Saquon Barkley of the Giants were recently photographed indoors with other teammates at a restaurant. Ten players on the Raiders were fined for attending a large gathering without masks, and the team was fined $500,000 and docked a sixth-round draft pick because of repeated violations of the league’s virus protocols. The Titans were fined $350,000 for their lax handling of the outbreak.

“Everyone is right to be worried, because the number of cases is going up nationwide and unfortunately they will continue to go up,” said Patrick Godbey, the president of the College of American Pathologists. “I don’t think anyone has a good way of knowing what people are doing when they leave the team facility.”

There have been a few cases of fans who attended N.F.L. games testing positive, though where they got the virus has not been established. But many teams have stopped increasing the size of their already limited seating capacity at stadiums, mindful of the risk to the broader community. The Minnesota Vikings and New England Patriots have given up any hope of hosting fans this season. Fans are also watching less football at home. Viewership for N.F.L. games has slipped.

Commissioner Roger Goodell continues to say that the league expects to complete a full slate of games and play the Super Bowl, as scheduled, on Feb. 7 in Tampa, Fla. But the league is considering allowing only about 20 percent of the seats to be filled, with fans socially distanced in small groups if they know each other. League sponsors, including Bridgestone, which typically invite hundreds of clients and employees to the Super Bowl city, have scaled back their entertainment plans.

The league is also making contingencies for an incomplete regular season. On Tuesday, the 32 owners approved a plan that would add one more playoff team in each conference if some teams are unable to complete their 16-game schedule and end up playing an uneven number of games.

The surge in coronavirus cases, coupled with the lack of flexibility in the league’s schedule, makes that more than a possibility. When an outbreak shut the Titans facility for about two weeks, the league postponed two Titans games by reordering bye weeks and shuffling the schedules of other teams.

After this weekend, though, only six teams will still have a bye week. If outbreaks occur on the other 26 teams, the league will have to shuffle its schedule to fit their games in or delay the start of the playoffs by one week and add an 18th week to the regular season for makeup games to be played.

It would be yet another wrinkle in an already rumpled 2020 season, another acknowledgment that despite the league’s success at containing outbreaks thus far, risky days and weeks lie ahead.

“We’re seeing the benefits of the concepts we’ve implemented,” Dr. Sills said. But “it is hard because we’re all tired of this, everyone’s tired of the pandemic, we’re tired of the procedures we have to go through on a daily basis.”

He added: “It continues to feel very unusual and abnormal because it’s not normal for us.”

Rob Gronkowski planning to return to Bucs for 2021 season – NFL.com

How the Seattle Seahawks Stayed Covid-Free – The New York Times