This week, the draw was announced for Women’s Rugby World Cup 2021, which will start in September 2021 in New Zealand.

If I could have chosen the draw myself, it wouldn’t be too different from the one that was drawn by New Zealand Prime Minister Jacinda Arden, and Rugby World Cup winners Melodie Robinson, Dr Farah Palmer and Dan Carter. Each group has a major competition in it: Group A has New Zealand and Australia, Group B has USA and Canada, and Group C has England and France. In each group, it will be hard for others to compete to reach the finals.

Those who finished in the top seven at Rugby World Cup 2017 in Ireland automatically qualified for next year’s tournament. That means New Zealand, England, France, USA, Canada, Australia and Wales have all confirmed their places at the tournament.

The remaining three teams have yet to be confirmed. Two places will be filled by a qualifier from Asia and Europe, with the final place going to the winner of the new Final Qualification Tournament, which offers a second opportunity for teams to qualify.

Rugby World Cup 2021 will give women’s rugby a platform it has never seen before, and I am confident that the sport is at a place now where it attracts men’s rugby fans too. Stuart Barnes recently wrote a piece in The Times titled ‘I’m not qualified to comment on women’s rugby – yet’. It was an article that, in fact, could have stopped at the headline, but he did explain that for him, women’s rugby is tarnished by its humble beginnings. There will be some with a similar view, who haven’t watched women’s rugby for years and still envisage the level the game was at decades ago.

But gone are the days where to watch international women’s rugby you had to stream it online off a dodgy link. England v France was on BBC 2 on consecutive Saturdays. Most games are easily accessible if you are interested enough. This is frustrating for the players too, as England players Zoe Harrison and Sarah McKenna told RugbyPass.

But that competition cannot come until more unions invest in women’s rugby. England, having 28 players on full-time central contracts, has a clear advantage over the other Home Nations, who are mostly ‘amateur’ athletes. Let’s be clear though, this simply means they aren’t paid to play for their country, every other part of how they play is professional. I use the word ‘amateur’ not as a remark on the level the other nations play – but more with a side eye at the unions that fail to adequately invest in women’s rugby.

Take Wales as an example here, where most players play their club rugby in the Allianz Premier 15s across the border in England. What could be more professional than working all day, some as emergency workers, driving two hours or more to train for your club, driving home, and doing the same the next day? 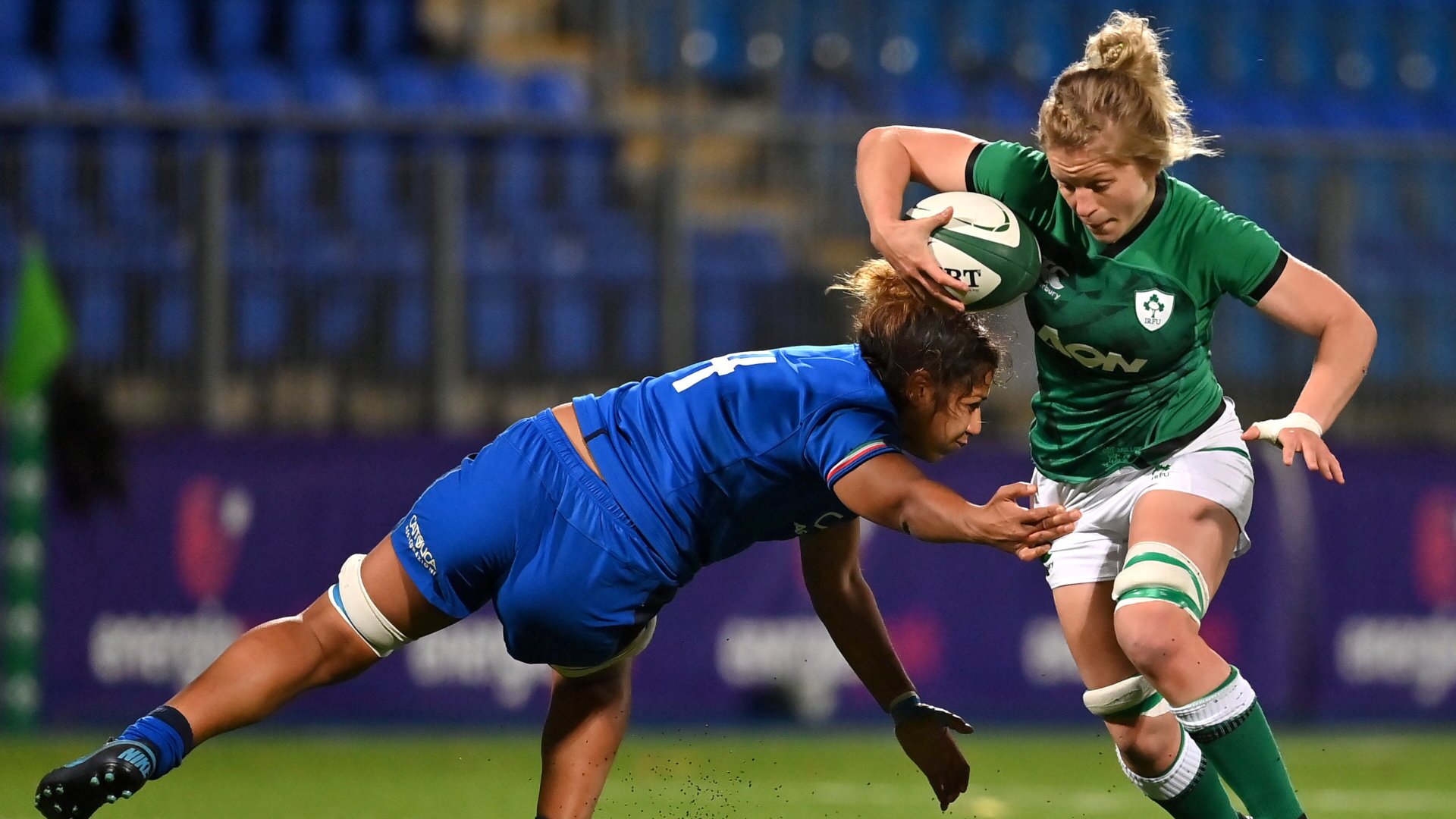 Claire Molloy of Ireland steps inside Sara Tounesi of Italy during the Women’s Six Nations Rugby Championship match between Ireland and Italy at Energia Park in Dublin. (Photo By Brendan Moran/Sportsfile via Getty Images)

A few weeks ago, I spoke to recently departed Wales Women head coach Darren Edwards, who couldn’t believe the sacrifices the Wales players make to play for their country. There is some promise from the Welsh Rugby Union of contracts in the future, based on performance. New head coach Warren Abrahams will be hoping to lead the Wales women to achieve this.

Yet Wales, Scotland, Ireland, France and Italy had the final three games of the Women’s Six Nations tournament cancelled, due to the coronavirus pandemic. A statement from Six Nations Rugby said: “Recent Government and Health Authority restrictions affecting squad preparations, travel, and the inability to stage matches due to the sport’s amateur status have made the successful completion of the 2020 Championship impossible.”

Yes, these games wouldn’t have affected the outcome, England won the Grand Slam, but the other players had been training towards those matches. We are less than one year out from the Rugby World Cup, and I worry for our Home Nations, who will face another tournament without professional status.

Other Rugby World Cup qualifiers were cancelled too, which were due to take place in December. These will be postponed until it is safe for international fixtures to take place.

England deserve every success they have, and let’s not forget that it was only in 2008 that they were even allowed to wear the red rose that has now become their trademark, and only 2012 when they were given an office inside Twickenham Stadium. As Fiona Tomas reported this week, England Women’s team base used to be a couple of portacabins in the Twickenham car park.

England are the number one team in the world, holding on to that title this week in their narrow win against France. It was a nail-biting game that ended with Emily Scarratt kicking a penalty to win the game 25-23. It highlighted just how exciting women’s rugby can be. Fierce competition, aggressive play, and a high level of skill. 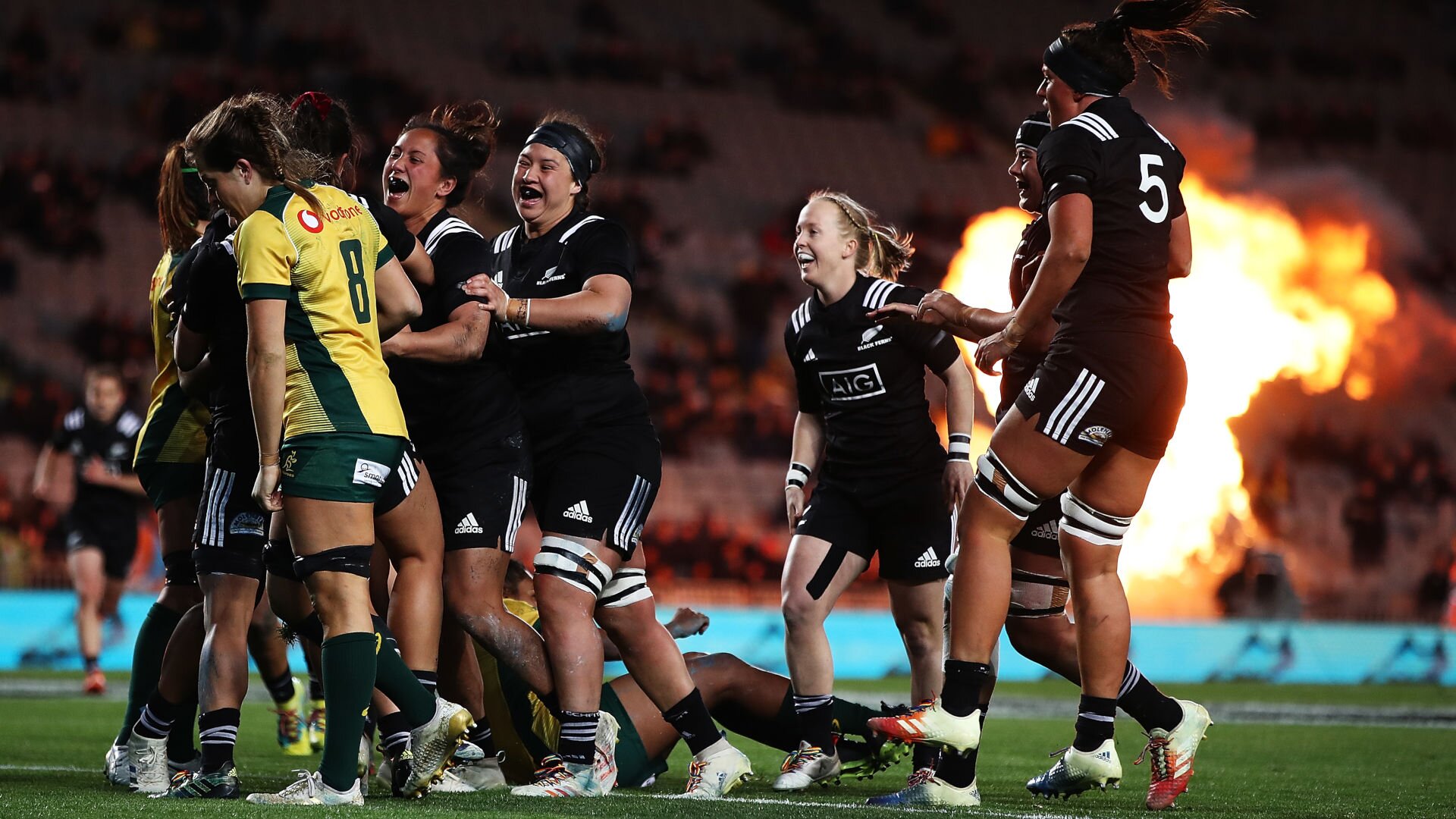 The Wallaeroos batle the Black Ferns

Every England player I’ve spoken to wants the other Home Nations to become professional, because many of them remember what it was like before they had contracts. Katy Daley-McLean, who this Saturday became the third most capped England international rugby player, remembers what it was like to have to work as a teacher the day after a major international match.

That’s the reality for many players still. I spoke to a few players last year about the sacrifices they make to play in the Six Nations, and the main jealousy wasn’t the pay, but it was being able to rest the day after a game and not have to go to work.

Next year, many will use their entire year’s annual leave allowance to play in the Rugby World Cup.

If you have written off women’s rugby, I have just under a year to encourage you to watch Rugby World Cup 2021. I’ll cover the issues off the pitch that make the game so unique and interesting, and worth your attention. Not only will Rugby World Cup 2021 be a fantastic tournament in its own right, I urge you to get behind the players, who consistently prove their professionalism.

It will be a case of rivals playing rivals next year when the @rugbyworldcup kicks off. https://t.co/LygvemuEdV