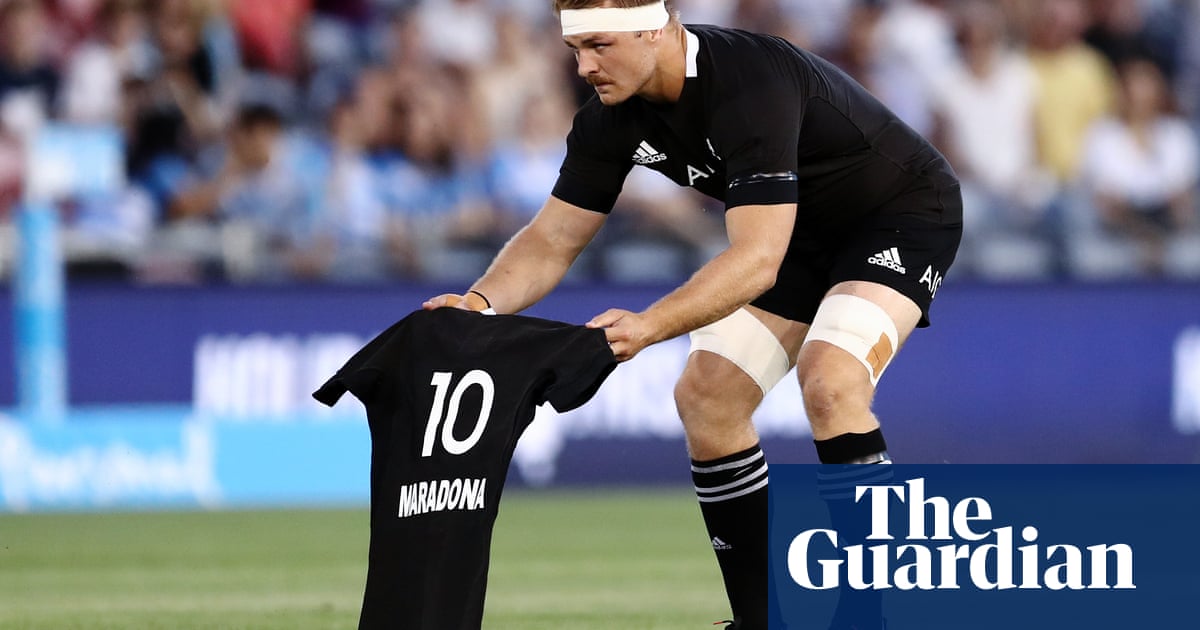 The All Blacks have been widely lauded and thanked by opponents Argentina for their touching Tri-Nations pre-match tribute to Diego Maradona.

Captain Sam Cane laid a New Zealand jersey on the field before the start of their 38-0 Tri-Nations Test win over over the Pumas in Newcastle on Saturday.

As the All Blacks lined up to perform the Haka, Cane stepped out, walked toward midfield and presented the shirt bearing Maradona’s name and his famous No 10.

“It was a gesture, a token, of paying our respects to an Argentine legend, a world legend in his field as well,” Cane said after the match.

Argentine players, wearing black armbands in memory of their countryman and football great, looked on, some nodding in acknowledgment.

“I didn’t know [about the tribute] until I did the coin toss with Sam Cane and he told me about it,” Pumas captain Pablo Matera said.

Cane said the idea had come from All Blacks halfback TJ Perenara.

“Rugby is a game first and foremost that is built on respect I believe, and it was the respectful and right thing to do,” Cane said.

Social media soon lit up with praise for the classy gesture.

Maradona died on Wednesday, aged 60, of a heart attack in a house outside Buenos Aires where he had been recovering from a brain operation 3 November.

During the week, Pumas coach Mario Ledesma had expressed how important Maradona was to Argentinian sport.

“He had an attraction, like the world stopped when he was there,” Ledesma said. “It was like magic and he was an example of how you should play for this jersey, and to be fair he was passionate about every team. He would go and watch tennis, hockey, rugby, football, everything.

“Whenever there was an Argentinian jersey he was there and he united people in Argentina, and in Argentina sometimes it’s difficult to unite people who think different.”

Ledesma is now firmly focused on the Wallabies, who Argentina face again next week, and the coach said they look to go out with a bang at Bankwest Stadium.

The Pumas had followed their first Test win over New Zealand with a draw against the Wallabies but their hopes of a first southern hemisphere Test championship title were effectively ended by a 38-0 loss to the All Blacks on Saturday.

Australia on Saturday will be their fourth Test in four weeks, arduous for any team but especially one that had not played an international rugby for more than a year and spent much of the season training in lockdown.

“It’s been a big effort to come over here and it’s a lot of sacrifice not to finish the way we deserve to finish,” Ledesma said in Newcastle after the loss to the All Blacks. “We’ll go out there and try to have a great game.“

Dan Palmer: Former Australian international becomes only the second rugby player to come out as gay – The DHT News

Rugby union doesn’t know what has hit it – Financial Times