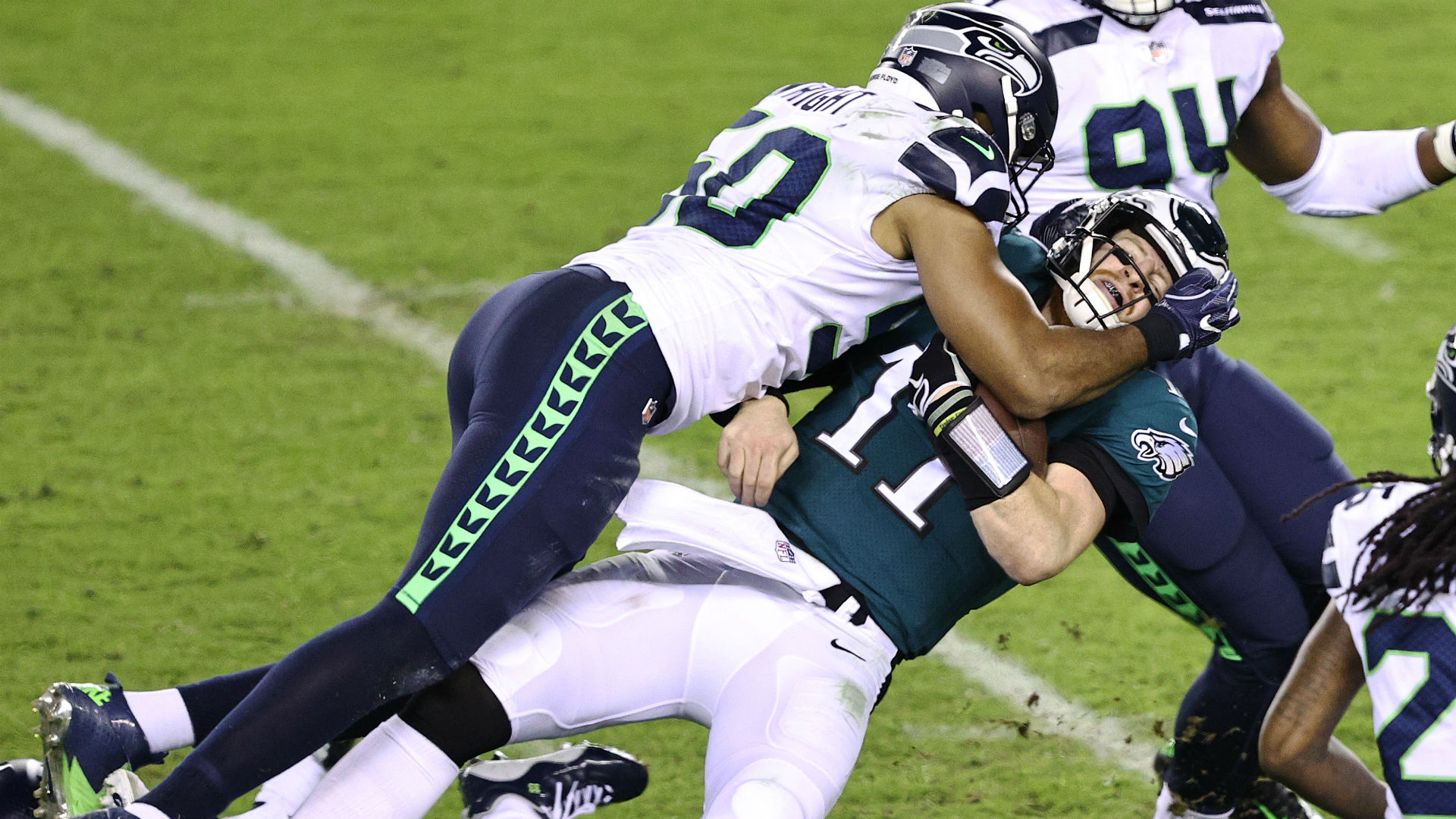 Despite an inconsistent performance from Russell Wilson and his offense, the Seahawks cruised to a 23-17 victory over the Eagles on Monday night thanks to another solid defensive effort.

Wilson completed 22 of 31 passes for 230 yards and a touchdown. The bulk of that aerial production went through D.K. Metcalf, who made 10 catches for 177 yards. Wilson struggled to convert opportunities past midfield, though, and left points on the table that could have made the contest lopsided.

Seattle held Philadelphia to 250 total yards and kept Carson Wentz mostly quiet. Wentz’s touchdown passes came in the final seconds of each half, the second one via a meaningless Hail Mary into the end zone that was deflected into the hands of Richard Rodgers with 12 seconds remaining.

The Seahawks set the tone early on, forcing five straight Philadelphia three-and-outs to start the game and never letting the Eagles get comfortable.

Wentz added to his league-worst interception tally in the fourth quarter with a heave into the end zone that was picked off by Quandre Diggs. His touchdown pass with 12 seconds remaining left the door open for a potential comeback, but Metcalf shut the door by recovering the ensuing onside kick.

With the win, the Seahawks (8-3) capitalized on the Rams’ loss on Sunday and move a game up in the NFC West. Meanwhile, the Eagles (3-7-1) missed a chance to take the lead in the putrid NFC East.

11:25 p.m. — TOUCHDOWN, EAGLES.  Welp, it isn’t over yet. Wentz lofts a prayer into the end zone and Richard Rodgers catches it off the tip for the 32-yard score. Myles Sanders punches in the 2-point conversion to make it 23-17 with 12 seconds remaining.

11:15 p.m. — TURNOVER ON DOWNS.  Wentz’s pass falls incomplete on fourth down and Seattle takes over at the Philadelphia 25-yard line with 2:14 remaining.

11:07 p.m. — Seahawks punt.  Seattle can’t generate points from the turnover and Philadelphia gets the ball back at its 12-yard line with 3:54 remaining.

Nice play by Metcalf here to put the Seahawks in scoring position.

10:40 p.m. —  TURNOVER ON DOWNS.  This time Seattle’s defense comes up with the big play as K.J. Wright bats down Wentz’s pass on fourth down. Seahawks take over at the Eagles’ 48-yard line with 13:30 to play in the fourth quarter.

10:30 p.m. — FIELD GOAL, SEAHAWKS.  Tyler Lockett comes up a yard short on the third-down catch and Seattle has to settle for a 44-yard field goal from Jason Myers to extend the lead to 17-9 with 2:06 remaining in the third quarter.

10:17 p.m. — FIELD GOAL, EAGLES.  Philadelphia cuts into the Seattle lead with a 42-yard field goal from Elliott. Some positive signs for the Eagles’ offense going back to their last possession of the first half. Seahawks lead 14-9 with 7:33 left in the third quarter.

10:05 p.m. — Seahawks go three and out.  Nothing doing for Seattle to start the second half. Philadelphia gets the ball back at its 28-yard line with 13:22 left in the third quarter.

9:48 p.m. — TOUCHDOWN, EAGLES.  Wentz connects with Dallas Goedert for a 3-yard TD. As bad as Philadelphia started, it’s a one-score game. Jake Elliott misses the PAT though, so Seattle leads 14-6 with 12 seconds left in the half.

9:27 p.m. — TOUCHDOWN, SEAHAWKS.  Chris Carson weaves in and out and runs through the Philadelphia defense for a 16-yard TD run. Seattle leads 14-0 with 5:27 left in the second quarter.

9:16 p.m. — Eagles go three and out AGAIN.  Brutal start for Philadelphia’s offense tonight. Seattle gets the ball back at its 34-yard line with 9:25 remaining in the first half.

9:04 p.m. — Another Eagles three and out.  Drink. Wentz is 2 of 7 for 4 yards. Jalen Hurts came in for a play and completed a 6-yard pass on his first attempt. Seattle takes over at its 32-yard line with 13:37 remaining in the second quarter.

8:57 p.m. — Seahawks punt.  This time, with the ball in its own territory, Seattle opts not to go for it on fourth and short. Philadelphia takes over at its 27-yard line with 15 seconds left in the first quarter.

8:51 p.m. — Eagles go three and out.  Drink. Another rough drive for Philadelphia and Seattle gets the ball back at its 16-yard line, 1:46 remaining in the first quarter.

8:45 p.m. — TURNOVER ON DOWNS.  Seattle goes for it again on fourth down and, again, Derek Barnett comes up with the big play and sacks Russell Wilson. Philadelphia takes over at its 38-yard line with 3:39 left in the first quarter.

8:38 p.m. — Eagles go three and out again.  Carson Wentz is 0-for-4 so far throwing the ball tonight. Seattle gets the ball back at the Philadelphia 45-yard line, 5:19 left in the first quarter.

8:33 p.m. — TURNOVER ON DOWNS.  Philadelphia comes up with the goal line stand as Derek Barnett gets in the back field on fourth down to bring down David Moore for a 5-yard loss on the jet sweep. Eagles take over at their 7-yard line, 6:57 remaining in the first quarter.

8:18 p.m. — Eagles go three and out.  Philadelphia can’t get anything going and Seattle will take over at its 35-yard line for its first possession, 14:31 left in the first quarter.

8:15 p.m. — Seahawks win the toss.  Seattle defers and the Eagles will get the ball to start the game.