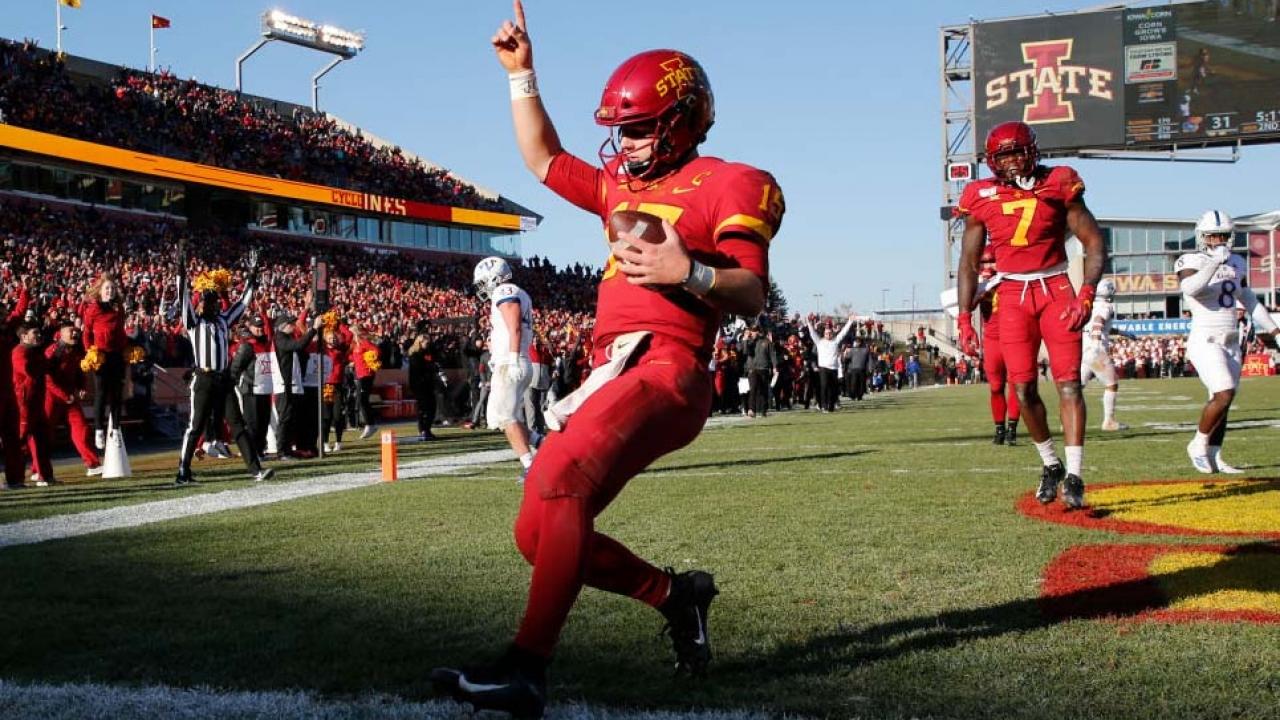 It’s always the weeks when you don’t expect it, isn’t it? Despite many of the top-ranked teams in the country being idle in Week 15, Saturday still produced a thrilling game in which a legitimate playoff contender suffered an unexpected loss.

That guarantees some shakeups in the CFP rankings, and NCAA.com is here with a complete analysis and breakdown of the rankings.

Florida had maintained its No. 6 ranking, until LSU pulled off a wild 37-34 upset in Gainesville amid heavy fog. LSU kicker Cade York’s 57-yard field goal proved to be the difference and Florida’s Evan McPherson’s potentially game-tying was just wide left.

It was Florida’s second loss of the season – the other was against now-No. 5 Texas A&M — and while the Gators still have a chance to win the SEC Championship, which is also their only potential path to the playoff, they’re now sitting at No. 7 in the CFP rankings.

Here’s how the idle teams were handled

Would the selection committee keep all of them in the same position as last week? Not quite. While the top 5 teams from a week ago stayed put, there was movement from idle teams in both directions. Iowa State comes in at No. 6 after a rout of West Virginia and benefitted from Florida’s loss to LSU. The Bearcats dropped a spot, swapping with Georgia after Bulldogs won by 35 over a previously ranked Missouri team. The final movement came from Oklahoma and Indiana, which both moved up one spot. This is a result of then-No. 10 Miami dropping to No. 18 after a 36-point loss to North Carolina.

We’ll preface this by reminding you that a two-loss team has never been selected to the College Football Playoff. In the Week 16 CFP rankings, there are four teams in the top 10 already with a pair of losses and three are playing for a conference title. While six years of data would indicate that history doesn’t favor two-loss teams, this is 2020 — a year that’s been anything but traditional.

To be clear, we’re not saying an upset or two will lead to a brand new top 4 when the smoke clears on December 20. But a little drama over Championship Week could certainly spice up the CFP discussion. Here are the matchups to watch:

No. 1 Alabama vs. No. 7 Florida (SEC Championship) — The Gators’ CFP chances took a hit in their loss to LSU. But the CFP Committee only dropped UF one spot in the rankings. A win over the Crimson Tide would be UF’s second against a team currently in the top 10. It’s the kind of resume addition that could make things interesting. But then again, jumping three spots to reach the top 4 is not an easy task. Neither is beating Nick Saban and Alabama in Atlanta. On a side note, don’t forget about No. 5 Texas A&M. Only one team has ever reached the CFP without playing for a conference championship game and that was the Tide in 2017.

No. 2 Notre Dame vs. No. 3 Clemson (ACC Championship) — We’ve already seen this matchup once before when Notre Dame pulled out a 47-40 win in double overtime. Clemson didn’t have Trevor Lawrence the first time around. The Tigers will need their star quarterback to be a difference maker or risk losing a second game this season. In the spirit of 2020, the Fighting Irish are 60 minutes away from their first-ever conference championship win.

No. 4 Ohio State vs. No. 14 Northwestern (Big Ten Championship) —  The Big Ten’s decision to eliminate a minimum number of games required for the conference championship greatly benefitted Ohio State, which otherwise could have been scratched from this game. The Buckeyes have won four of five games this season by double digits. They’ll have a chance against Northwestern to add a second win against a team ranked in the top 15 of the current CFP rankings.

No. 6 Iowa State vs. No. 10 Oklahoma (Big 12 Championship) — Now here’s another championship where things could get tricky. Both Iowa State and Oklahoma have two losses and had them when the CFP rankings started in Week 13. They’ve only continued to rise as we get deeper into the season. The Cyclones and Sooners would likely need help to crack the top 4, but a dominant performance by either would be a good start.

No. 9 Cincinnati vs. No. 23 Tulsa (AAC Championship) — The Bearcats slid down a spot while they were off in Week 15. They were supposed to play Tulsa for home-field advantage in the AAC Championship. Instead, they’ll just play for the title. Cincinnati can pick up its first win over a ranked team this season and while that may not be enough to get into the CFP, it could be the difference in securing its spot in a New Year’s Six game.

No. 12 Coastal Carolina vs. No. 19 Louisiana (Sun Belt Championship) — The Chanticleers are one of the top stories of the year, one game away from a perfect season after finishing 5-7 a year ago. To complete the unbeaten campaign, they’ll have to beat Louisiana a second time. The Chanticleers won 30-27 in Lafayette earlier this year. A win over the Ragin’ Cajuns would be their second ranked win, giving CCU a case for a New Year’s Six bowl bid.

No. 13 USC vs. Oregon (Pac-12 Championship) — The Pac-12 has not reached the CFP since 2016, a streak that will most likely continue this year. USC wrapped up its abbreviated regular season 5-0 but didn’t play a team that finished above .500. The Trojans can win their first Pac-12 title since 2017.

The final College Football Playoff rankings will be released on Sunday, Dec. 20.

Recruiting losses to UGA hurt, but Clemson football can settle it on the field – Rubbing the Rock