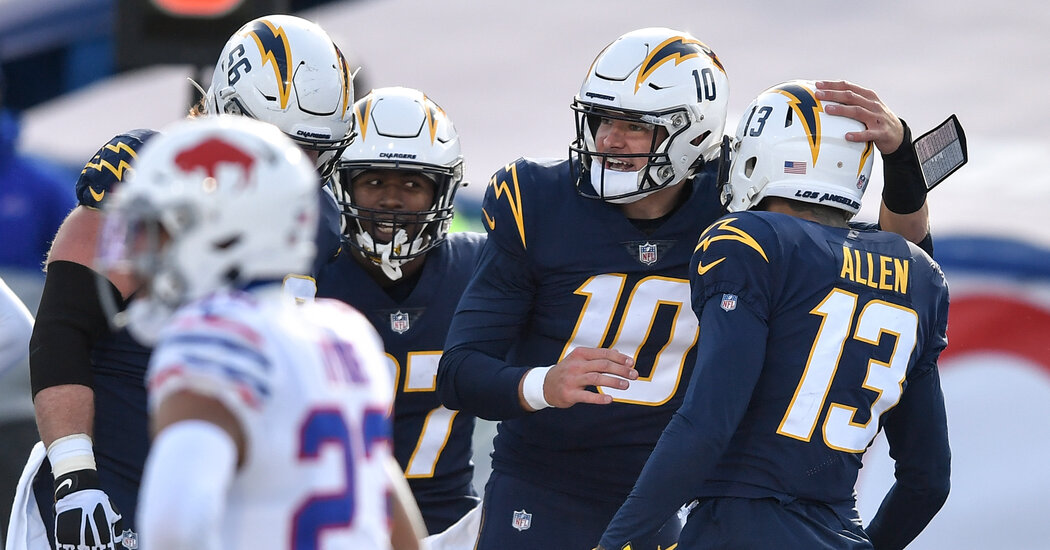 The Patriots (6-7) have missed the playoffs just twice since 2001, but even with a recent hot streak they are down to a 4 percent chance at qualifying this year, and that number will drop to zero with a loss to the Dolphins (8-5), who have a 43 percent chance at a wild card. The tables appear to have turned in this rivalry, with New England being the scrappy underdog that could spoil things for the seemingly superior team. Miami’s style of play doesn’t lead to many mistakes, so unless Coach Bill Belichick has something up his sleeve, the Patriots can start making vacation plans for early January. Pick: Dolphins -2.5

Sam Darnold feels like the Darkest Timeline version of Jared Goff. Instead of developing under the tutelage of an era-defining offensive genius like Coach Sean McVay, Darnold has been saddled with Coach Adam Gase, and the Jets (0-13) seem to have little chance of avoiding a winless season. The talent imbalance in this game — reflected accurately in the point spread — is extreme, and a win for Los Angeles (9-4) should help the team increase its 60 percent chance of winning the competitive N.F.C. West. A 17-point spread is absurd, but so are the Jets. Pick: Rams -17

When the schedule came out, this was supposed to showcase Jimmy Garoppolo leading the defending N.F.C. champions into Dak Prescott’s house to rekindle a classic rivalry. Backup quarterback Nick Mullens facing off against Andy Dalton doesn’t really live up to that advanced billing. Technically, neither team has been eliminated from playoff contention, with the 49ers (5-8) having a 9 percent chance at a wild-card spot and the Cowboys (4-9) having a 1 percent chance of winning the N.F.C. East. With San Francisco running back Raheem Mostert uncertain to play and wide receiver Deebo Samuel expected to be out, the Cowboys have a decent chance at a second straight win. Pick: Cowboys +2.5

Oklahoma Coach Lincoln Riley will love this one. Kyler Murray of the Cardinals (7-6) transferred to Oklahoma to play for Riley in 2017 and won the Heisman Trophy in 2018. Jalen Hurts of the Eagles (4-8-1) transferred to Oklahoma to play for Riley in 2019 and was a Heisman finalist. Hurts’s promotion to starting quarterback for Philadelphia last week set up this matchup between two of Riley’s star pupils, and while the over-under on this game isn’t particularly high, you can expect plenty of highlight reel plays. Hurts has a chance to keep following in Murray’s formidable footsteps, but right now Murray is a more complete player and the Cardinals are a better team. With Arizona’s chance at a wild card around 50 percent, the team should be motivated to win at home. Pick: Cardinals -6.5