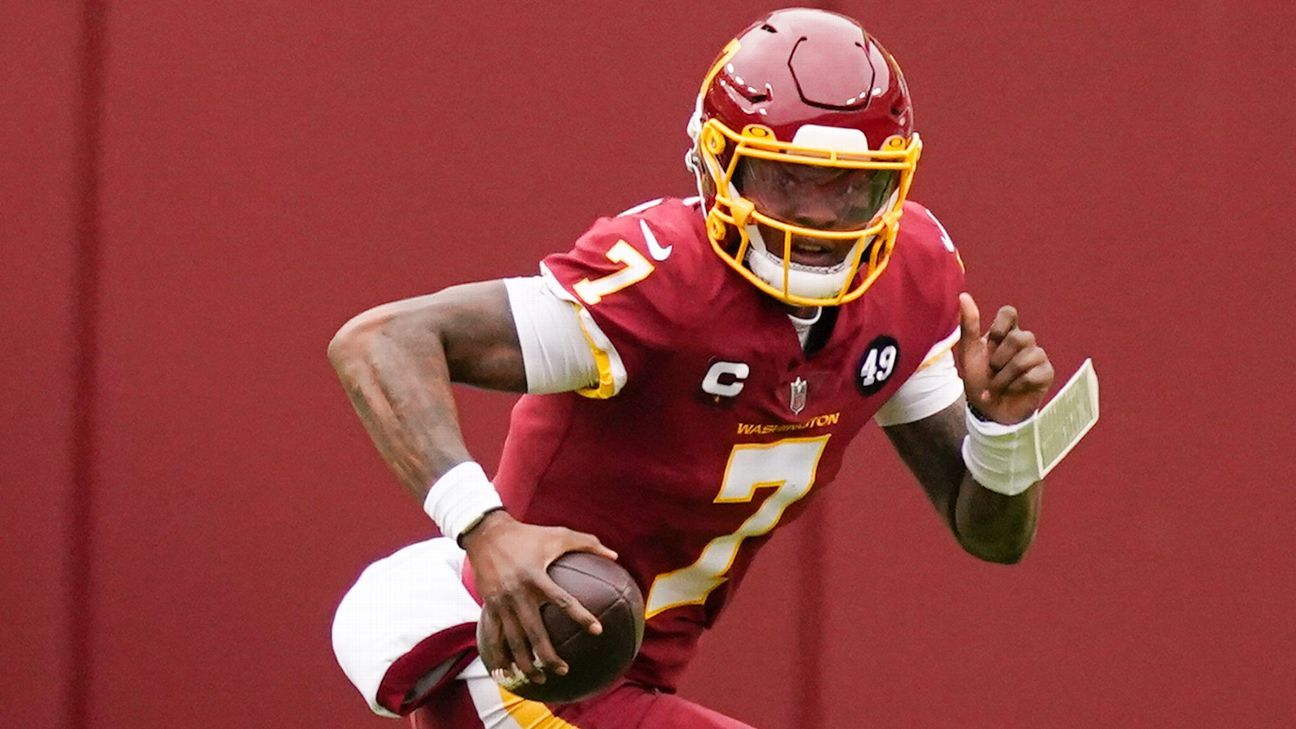 ASHBURN, Va. — The Washington Football Team fined quarterback Dwayne Haskins and removed him from the role of team captain three days after he was photographed at an event with strippers while not wearing a mask, coach Ron Rivera said Wednesday.

“The biggest thing is we are holding him accountable and he’s been punished and he accepted it,” Rivera said. “As we go forward, that’s the thing that we’re looking for, is that if you make a mistake, you’ve got to step up and you have to take responsibility.”

But there’s still a chance Haskins will continue to start for Washington (6-8), which hosts the Carolina Panthers (4-10) on Sunday. Alex Smith did not practice because of his strained right calf, limiting him to playing catch while his teammates stretched.

“I know my team needs me,” Haskins said. “I need to step up to the plate and I can’t be selfish and I need to stop getting in my own way. I’m putting things in motion as far as a plan for myself to be a better teammate and be more accountable and fix my issues that have brought me to this situation.”

On Sunday, Haskins attended his girlfriend’s birthday party at a hotel where strippers were present. It was the second time he violated COVID-19 protocols this season. Earlier this year, he made a reservation for a family friend at the team hotel the night before a game at the New York Giants.

“I know I shouldn’t have put my team at risk,” Haskins said. “I shouldn’t have been there. We were more than 10 people not wearing masks and that’s a violation regardless of where it was at.”

Rivera said he was made aware of the posts Monday afternoon and immediately contacted Haskins. He said they had Haskins come to the facility to be tested and have been in constant contact with the NFL.

“Although we are extremely disappointed in the decision Dwayne made, I’m glad that he had told the truth and was upfront about the entire situation,” said Rivera, who said he and Haskins have talked five or six times about the situation.

Haskins apologized to his teammates and was taking starter reps during practice.

“I felt he was heartfelt and sincere,” Smith said. “As teammates, our job, as disappointed as we were, is to try to help him and support him as a teammate. We all go through things and make mistakes and we all have our own deals going on. No judgment there.”

Washington also gave reps to backups Taylor Heinicke and Steven Montez, both of whom were active last week with Smith sidelined.

Haskins, who like his teammates has been tested on a daily basis, must practice with a mask and a face mask with a special shield. He will attend meetings via conference call.

He said it was difficult to address the situation publicly.

Rivera said after consulting with the NFL, part of the plan includes Haskins getting two daily tests. In practice, he’s supposed to social distance as much as possible. All of their meetings are virtual.

Haskins has two more years on his rookie contract and there’s certainly no guarantee he’ll last beyond this season. There was disappointment in how he has prepared during the week when he started the first four games — a common theme last season as well.

He did not endear himself to teammates or coaches by appearing to celebrate in the locker room after his first 300-yard game following a 20-point loss to Baltimore.

That’s why, when asked if he felt this was a last chance, Haskins said, “Yeah.”

“But you get a chance, you’ve got to make the most of it, and I’m just grateful to have that chance,” Haskins said. “When you mess up, you have to be able to admit it. It’s all self-provoked and I need to be man enough to overcome it and help this team win, and that’s what my plans are.”

Smith, who did not work during the portion open to the media, was listed as having been limited during practice.

He said he’s “exhausting everything” in order to play, knowing that his team would clinch the NFC East title if it wins and the Giants lose to Baltimore.

“Absolutely plan on being out there,” Smith said. “There is a progression here as the week goes on.”