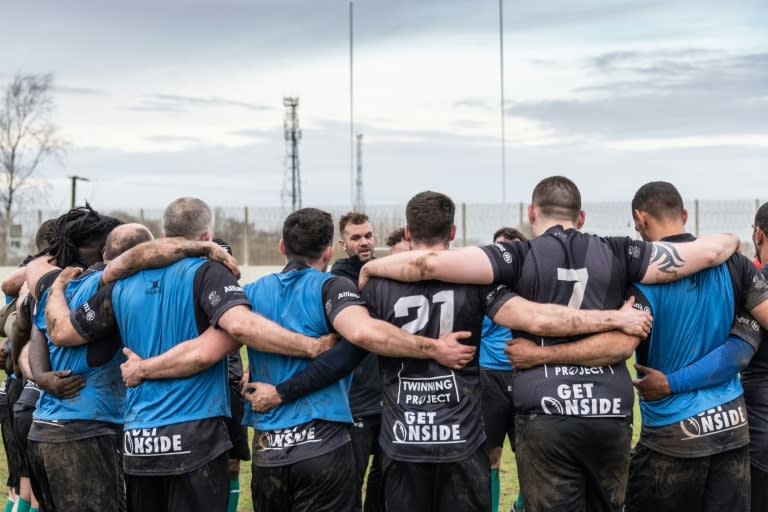 On the pitch, Saracens have become one of the giants of European rugby. Off it, they are using their powerful platform to prepare prisoners for life after release.

The three-time European champions have taken their Get Onside programme to The Mount prison, near London, which holds about 1,000 inmates.

The club were pointed in the direction of the category C jail by former Arsenal vice-chairman David Dein, who launched his Twinning Project in 2018.

That project’s objective is to twin every prison in England and Wales with a local professional football club to improve prisoners’ wellbeing and give them a qualification.

AFP was granted rare access to The Mount to talk to those tasked with putting the men through their paces on the rugby pitch.

At the time of the visit, a total of 30 prisoners were signed up — after security clearance — for the eight-week course, which was due to climax in a match that eventually had to be scrapped because of a coronavirus lockdown.

Inmates are at the prison for offences ranging from theft to murder — the only two categories of prisoner not admitted are those convicted of terrorism and sex offences.

The Mount, a training and resettlement prison, has long had a rugby tradition and has been involved in local leagues for decades — with a hiatus that ended in 2019.

Stephen Fitzsimmons, the supervising officer of physical education, said rugby had a long tradition at the institution.

“Mount rugby have won numerous awards including a president’s award from the Rugby Football Union, which is ironic.” he said.

Fitzsimmons said because the rules of the sport were alien to many, it acted as a great “leveller.”

“I tell them ‘I am Fitz, not guvnor, when we step over that white line’,” he added.

“They are more like rabbits in the headlights when they start playing. They can be cocky and the next minute they are on their backside.

“The rugby programme is massively important as the ethos of the sport serves them really well. It is adding another layer.”

For Sam Cload, the Get Onside project manager, the aim is to help prisoners make the right choices as they focus on the future.

He said he could empathise with the prisoners as he was on a “slippery slope as a young fellow.”

“Once you are in trouble it is hard to right the ship again,” said Cload, who joined the project in 2019.

“I want to offer something positive to people who perhaps have made the wrong choice and now need help to start making the right choices again.”

Dein, once one of the most powerful figures in English football, has praised the work taking place at the prison, situated in the leafy commuter belt about 25 miles (40 kilometres) from London.

“The exceptional work taking place at The Mount exemplifies the Twinning Project’s belief that sport really can change lives for the better,” he said in a statement to AFP.

The project is not just about rugby — it also involves bringing in experts to teach prisoners about how to prepare job applications and there are topical discussions before training.

Cload posts a maxim on the whiteboard before the discussions.

“For someone released, there is a short timeframe before they fall back among old groups of people they hung out with before and who are a bad influence.”

Cload said he wanted those released to come to the club afterwards and carry on working with them.

One example is Oz, who became involved in the programme while at a young offenders’ institution, which is where the project began in 2011.

Oz, in his 20s, who asked to be referred to only by that name, served three years of a six-year sentence for grievous bodily harm and money laundering.

He is now a project mentor and sits on the project steering group as an advisor.

He said the programme had served him well.

“Maybe in regular jail life you would not mix together but this (rugby) you have to have each others’ backs,” he said.

“This teaches you in applying values of rugby to everyday lives outside of prison like humility, respect, honesty teamwork.

“Those are the pillars.”