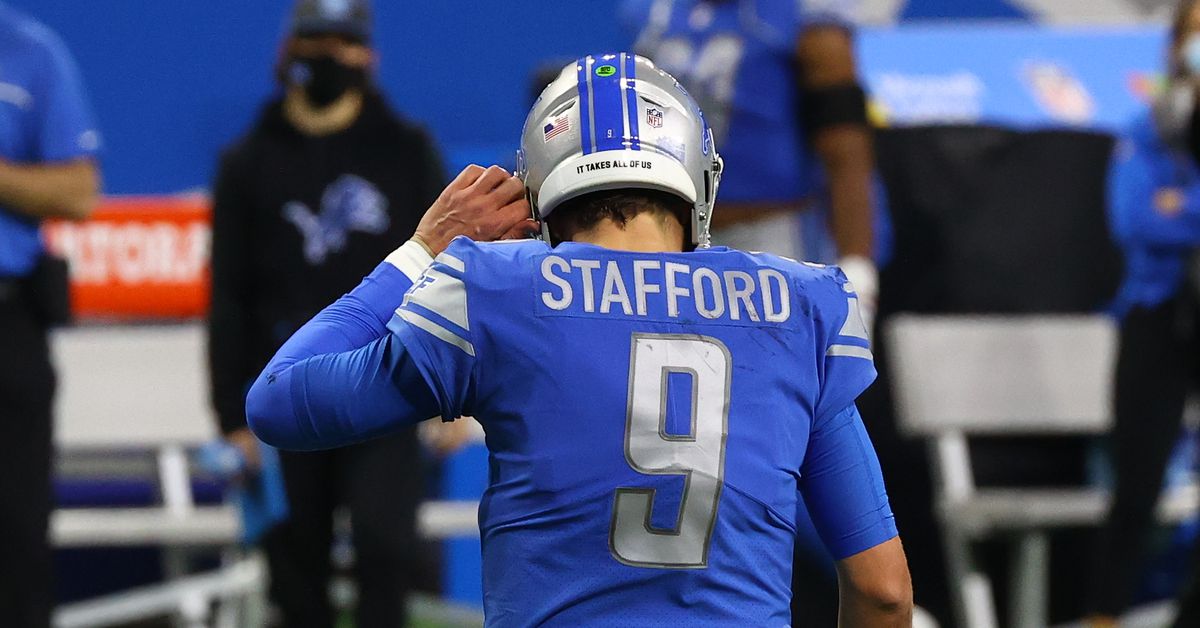 1) While it’s been reported that Patriots offensive coordinator Josh McDaniels is the front runner to be named the new head coach of the Philadelphia Eagles, the team is still doing their due diligence in interviewing coaches.

2) Yesterday I speculated that the Detroit Lions could be a surprise team in the Deshaun Watson sweepstakes, but even if they aren’t looking to make that particular trade, I still see them as looking to move on from quarterback Matthew Stafford if the right deal presents itself.

New general manager Brad Holmes hasn’t indicated he’s looking to move on, but he also didn’t say Stafford, who will be 33 in February, returning is a slam dunk either.

“Matthew, great player. And what you really appreciate is, I think the talent level is easy to see, but you really appreciate how intangibles show on film, how urgent he plays, how competitive he is, the toughness that he shows,” Holmes said on Tuesday via NFL.com. “But it is my job to evaluate the entire roster, and through that process, I have not had any discussions with Matt or any players for that matter. So I just want to be fair to the process and make sure that we evaluate that thoroughly, but obviously, Matt, very good football player.”

I just think a fresh start for a franchise coming off a third consecutive losing season is the way to go. They don’t seem to be primed for a quick turnaround, so keeping Stafford for a rebuild doesn’t make any sense for them.

3) The Atlanta Falcons are another team with an older QB that looks to be heading for a rebuild, but new head coach Arthur Smith seems ready to roll with the soon to be 36-year old Matt Ryan.

“We’re going to play to Matt’s strengths just like we tried to play to Ryan’s strengths,” Smith said via the team’s website about how he built the Titans’ offense around Ryan Tannehill the last couple years.

He called Matt “the ultimate pro” and a “great leader,” so I could see an instance where they trade down form their fourth overall pick and grab a QB themselves a bit later.

4) This title from CBS Sports is crazy.

And this passage is just as crazy.

Brady has more conference championship game appearances than 28 other NFL franchises. He has more playoff wins (32) than all but five franchises. Only the Pittsburgh Steelers, Green Bay Packers, Dallas Cowboys, and New England Patriots have more — and Brady has 30 of the Patriots’ playoff wins.

5) The Aaron Rodgers’ smile was all over the media on Sunday, but this was the instance I was most impressed with.

Imposed a cool broadcast angle that shows Rodgers quite literally calling his shot on the Lazard TD.

Rodgers starts his cadence, stops, alerts Allen by calling his name, then points to the coverage right before delivering the dagger. pic.twitter.com/CRm4aOvCcG

6) That was a scary looking injury when Patrick Mahomes went down in their divisional playoff game. He appeared to be struggling with consciousness as he made his way to his feet following a tackle. It wasn’t a blow to the head that lead to a near black out, but rather a nerve his his neck that may have been compressed.

He’s passed all his concussion tests, but he still needs to have his neck evaluated before a decision could be made on his availability for the AFC Championship game.

My money is on him playing, but if he can’t go it’ll be Chad Henne making the first playoff start of his 11 year career, in which case my money would be on the Buffalo Bills winning the game.

7) Mahomes wasn’t the only young superstar quarterback that left a playoff game with an injury, as Baltimore’s Lamar Jackson exited their game against the Bills with a concussion.

The Ravens couldn’t come back with Jackson sidelined, but thanks to Bills Mafia, his charity picked up a W.

7a) EJ was spitting some truth about Jackson.

The recency bias with Lamar Jackson this morning is… really something.

24-year-old, reigning NFL league MVP, who LED THE NFL in passing TD’s LAST YEAR who I’m now being told:
-”is a gimmick”
-”cant pass”
-and ”will never win big games”

8) EJ goes on to mention Bills offensive coordinator Brian Daboll in his next Tweet, and I was surprised to see reports that Daboll pulled his name from head coach consideration this cycle. He didn’t confirm nor deny the reports, but if he does stick with the Bills, and if that offense can excel again in 2021, he’ll have his pick of jobs in 2022.

9) Jay Glazer created a bunch of buzz on the FOX pregame for sharing his opinion that Drew Brees will be playing his last game in the NFL, but he prefaced his statement by saying it’s what he thinks. There’s been nothing official from Brees or the Saints, and while it’s likely that the 42-year old is done, he was still playing good football in 2020.

I do have a feeling that head coach Sean Payton is excited at the thought of designing his offense around the athletic Taysom Hill. Payton has always talked him up as a quarterback first, gimmick player second, so I think he’d have some interesting game plans for Hill.

Mack and Peterson also received end of the season kudos by the AP and Pro Football Focus, and they were also named to the NFC Pro Bowl roster.

Patterson is set to become a free agent in 2021, so would you like to see him return for some more time in Chicago?

His last deal was for 2 years, $10 million, with $5 million guaranteed, and with him turning 30 in March, I wonder where his demands would be.

Patterson has been fun as the unofficial recruiting coordinator for the Bears on Twitter, and this Tweet shows he’s fully aware of that status.