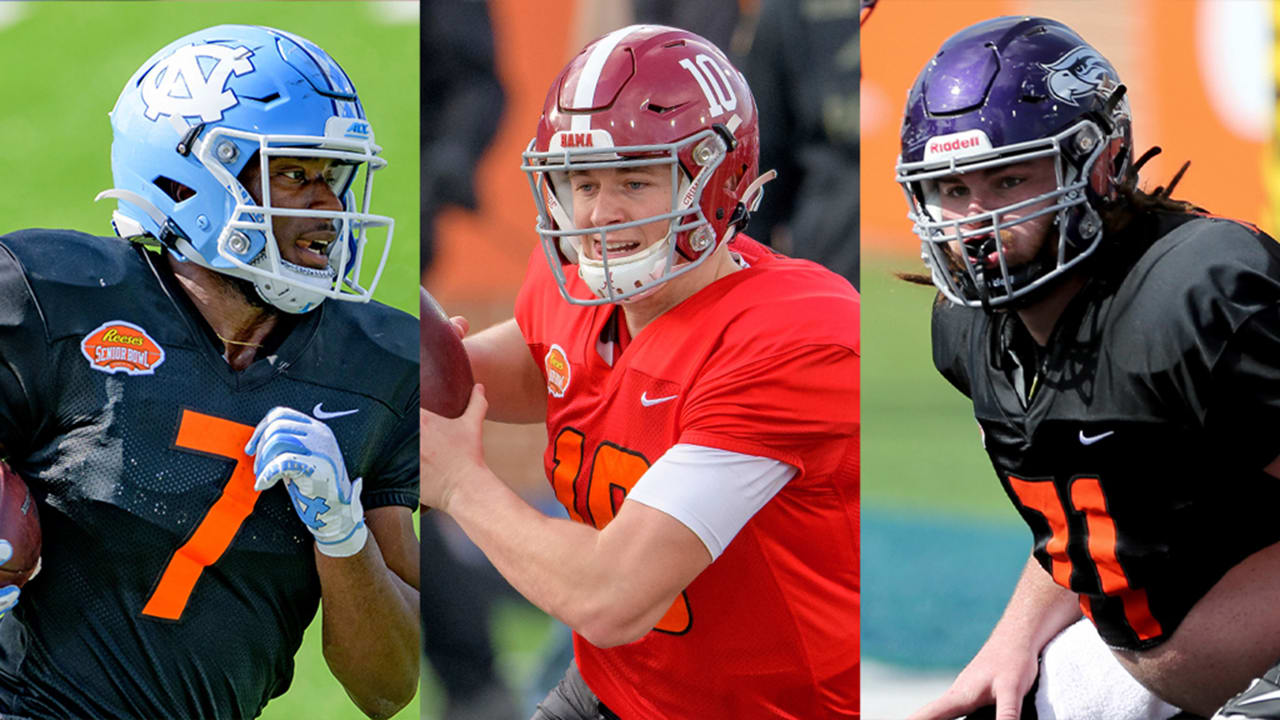 Demetric Felton, RB/WR, UCLA. Felton played running back last season for the Bruins, but he primarily lined up as a receiver at the Senior Bowl, although he did get a little bit of work at RB, too. He has some dynamic qualities. UCLA coach Chip Kelly told me Felton practiced at both running back and wide receiver throughout the 2020 season. That familiarity with each position showed in Mobile. He’s an explosive player.

Richie Grant, S, UCF. If you wanted to find Grant on the field, all you had to was follow the ball. He was around it all week long. I was really impressed with his performance in one-on-one drills. Grant proved he can cover in man and play in the deep middle. That’s a good combination as far as NFL teams are concerned.

Robert Hainsey, OL, Notre Dame. Hainsey was one of the most consistent prospects this week. He played with good hands and a firm base, taking snaps at guard and tackle. The team that picks him will be getting a very polished player. It didn’t go unnoticed that the Notre Dame guys worked after practice every single day, and I was told Hainsey’s interviews with teams were outstanding.

Cade Johnson, WR, South Dakota State. Johnson did not play this fall because the Missouri Valley Conference postponed its football season until the spring, but he showed no signs of rust during practice. He consistently won in one-on-one drills, flashing his impressive quickness. If your NFL team needs a good slot receiver, Johnson is a player to keep an eye on.

Mac Jones, QB, Alabama. The national championship-winning QB was consistent and steady in practices, just like he was during the season. There’s no individual trait that wows you, but he’s a good decision maker with accuracy and touch, especially underneath and at the intermediate levels. He’ll leave Mobile having shown he was the best passer of the Senior Bowl QBs. It was impressive that he came here to compete after wrapping up his season just a couple weeks ago and I still have him rated on the borderline of the first round. Hopefully we’ll get a chance to see him in the game on Saturday, but he did say he hurt his left ankle in practice on Thursday and wouldn’t play if he didn’t feel 100 percent.

Quinn Meinerz, interior O-lineman, Wisconsin-Whitewater. Meinerz was the most impressive player during practices, from start to finish. He was a relative unknown coming into the week, hailing from a Division III school. Well, not only did he prove he belonged, he showed everyone that he’s one of the best players here. Meinerz was dominant, displaying plenty of power and strength. No one should have any questions about his toughness either, as he reportedly played through a broken bone in his right hand on Thursday. He’s going to be a quality starting interior offensive lineman in the NFL.

If Drew Brees is saying goodbye to the NFL, he exits with his usual grace and dignity – The Washington Post