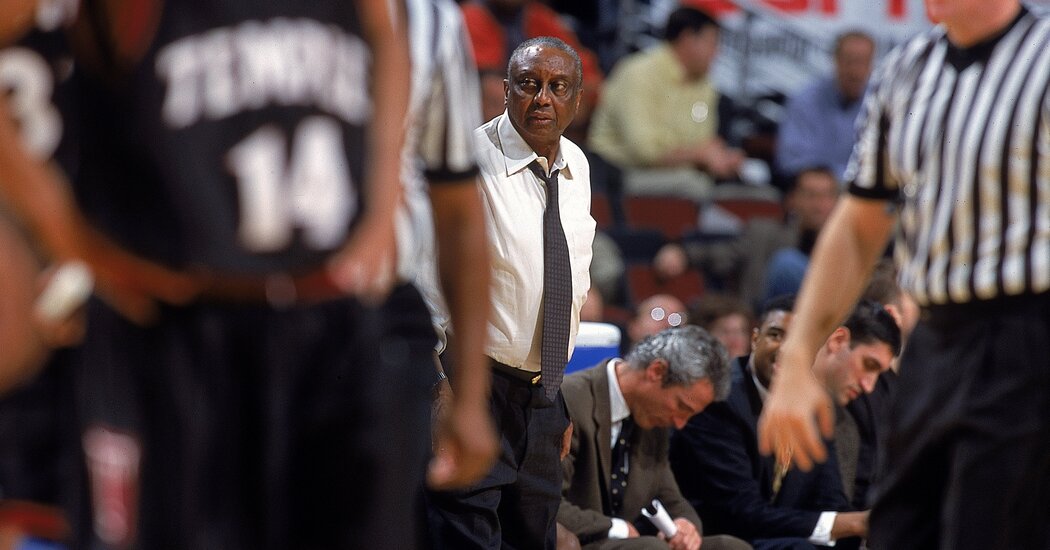 John Chaney, the famously combative Hall of Fame coach who took Temple University to 17 N.C.A.A. basketball tournaments, largely recruiting high school players from poor neighborhoods who were overlooked by the college game’s national powers, died on Friday. He was 89.

His death was announced by Temple. The university did not say where he died or specify the cause, saying only that he died “after a short illness.”

Chaney was 50 when Temple hired him, giving him a chance to coach major-college basketball after 10 seasons and a Division II championship at Cheyney State College (now Cheyney University), outside Philadelphia.

He coached at Temple, in Philadelphia, for 24 seasons, winning more than 500 games and six Atlantic 10 tournament championships and taking his teams to the N.C.A.A. tournament’s regional finals five times. He did that despite having only one consensus all-American, the guard Mark Macon, who led the Temple team that was ranked No. 1 at the close of the 1987-88 regular season.

Chaney was voted the national coach of the year in 1987 and 1988 and elected to the Basketball Hall of Fame in Springfield, Mass., in 2001.

His tie often askew as he shouted in his raspy voice at his players and the referees, Chaney was a consummate battler. He insisted that his players show discipline on the court — he regarded turnovers as basketball’s greatest sin — and that they pursue their studies and conduct themselves properly, however chaotic their lives might be.

Having grown up poor in the segregated Depression-era South and in Philadelphia, Chaney viewed himself as a mentor to young men who often came from broken homes.

“Sometimes I’m a little nasty,” he once told The Orlando Sentinel. “But underneath I still carry with me a strong feeling of concern for youngsters. I’ll do just about anything to convince a youngster he can be a winner, and not just a winner in basketball but a winner in life. I want players to take up my value system.”

Macon, who later played in the N.B.A. and became an assistant to Chaney, said in an interview with Comcast SportsNet that Chaney was “my mother and my father,” adding, “He’d tell me the right thing to do and not to do.”

But Chaney’s outrage at what he perceived as injustice sometimes raised questions about his own standards of behavior.

Incensed by what he saw as an effort by John Calipari, then the coach of his Atlantic 10 rival Massachusetts, to intimidate referees, he charged at Calipari after Temple had lost to his team by one point in a 1994 game, shouting “I’ll kill you” as onlookers held him back.

On the eve of a 2005 game against St. Joseph’s, Chaney said he would send “one of my goons” after the team’s players, whom he accused of using illegal screens to free up shooters. The next night he inserted a 6-foot-8-inch, 250-pound bench warmer, Nehemiah Ingram, into the game. Ingram committed a flurry of fouls, one of which leveled a St. Joseph’s senior forward, John Bryant, breaking his arm.

Chaney was suspended for one game over the outburst at Calipari and for five games after the St. Joseph’s incident.

Always outspoken, he railed against what he perceived as culturally biased and racist standardized academic testing requirements imposed by the N.C.A.A. for basketball eligibility. He expressed disdain for the administration of President George W. Bush and spoke out against the Iraq war.

John Chaney was born on Jan. 21, 1932, in Jacksonville, Fla., and grew up in a low-lying house that often flooded. His stepfather, seeking work in a defense plant, brought the family to the Philadelphia area during World War II.

Chaney was voted the most valuable player of Philadelphia’s public high school basketball league in 1951, but his family was too poor to buy a suit for him for the award ceremonies. He wore his stepfather’s suit, its sleeves and pants hanging down.

He became a small-college all-American at the historically Black Bethune-Cookman College in Florida, then played briefly for the Harlem Globetrotters and was named the most valuable player in the semipro Eastern League.

Chaney was the first Black basketball coach in Philadelphia’s Big Five — Temple, Penn, Villanova, St. Joseph’s and La Salle. His first Temple team went 14-15, but that was his only losing season with the Owls. His 1987-88 squad finished with a 32-2 record and went to a regional final. But Chaney’s teams were barely above the .500 mark in his last four years at Temple.

Information on survivors was not immediately available.

While Chaney’s temper memorably got the best of him at times, he apologized for the Calipari and St. Joseph’s incidents.

But even after his retirement, he seemed to enjoy reprising his provocative image. In a 2010 interview with The Temple News, a student newspaper, Chaney was asked if he had any regrets.

“The only regret I have is that I exposed so much of myself to the media,” he said. “Certainly, I regret the language I used with Calipari. I should have waited until after the game was over and then took him outside and beat the hell out of him.”