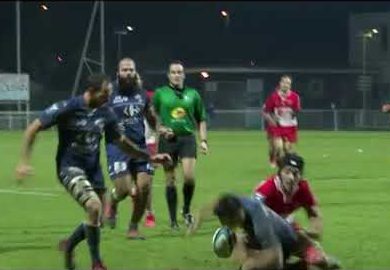 The ProD2 in France has done it again – take a look at this fresh madness. What a league!

With the clock dead this match-up between Colomiers and Biarritz, the visitors somehow kept the game alive – “playing the hot potato game” as ProD2 later described on their official social media channels – and pulled off an unlikely (okay, ridiculous) score. When it looked like it had all fallen apart, Brieuc Plessis-Couillaud of Biarritz managed to touch down and earn the telling try.

We’ve watched it over and over again…

As former European player of the year Alex Goode tweeted, “A mind blowingly mental way to lose a game in injury time!!”

And while there were other elements of the match to pick up on – especially if you love Irish rugby – most tended to focus on the pure French joy of it all.

In an era when we see ever-increasing amounts of organisation and tactical control in our rugby, this is the kind of play that reminds you what fun a loose game can bring. Surely we can forgive the errors when the result is as wacky and fun as this?

It’s safe to say this ending was a tonic of some sort for rugby fans looking for a pick-me-up. Though you had better believe it will have been a heart-stopper for coaches. And fair play to the referee… This can’t have been easy to comprehend on the field!

If you take a look at the ProD2 table, you’ll notice that Biarritz are in third place while Colomiers occupies fifth spot, sandwiched between Oyonnax in fourth and Nevers in sixth. And there’s barely any room there.

Can’t get to the shops? You can download the digital edition of Rugby World straight to your tablet or subscribe to the print edition to get the magazine delivered to your door.