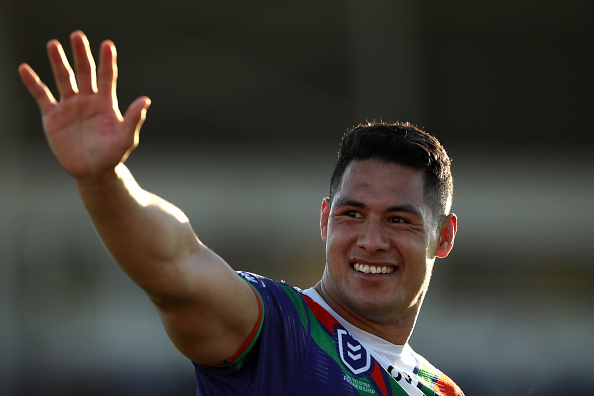 The highly-rated rugby league player Roger Tuivasa-Sheck is gone from his Warriors NRL side, to chase a dream of playing rugby union – and possibly the All Blacks.

Often touted but on Saturday afternoon, the rumours were proved true. In a ZOOM call, Warriors management and Roger Tuivasa-Sheck himself told media that his final year with the team would be 2021. At the end of the season, he will switch codes, with ambitions to reach the All Blacks and a 2023 Rugby World Cup dream.

“Today is all about confirming that this year will be my last year with the Warriors and, yes, I will be moving to New Zealand Rugby next year,” Tuivasa-Sheck said. And it immediately created multiple conversations within the New Zealand (NZ) rugby community.

Which Super Rugby franchise will he sign for? What position best suits the league fullback? And, who’s place in the All Blacks might be under threat? (if the Dally M Medalist progresses to the top levels of his new code).

And while the All Blacks are the zenith for any Kiwi footy player, the implication that he would be an automatic trialist for the 2022 squad raised the heckles of the former New Zealand rugby schoolboy representative.

“Rugby’s a game I grew up playing and rugby’s where I started my junior footy, playing right through so it’s always been there in the background,” he added. There have been multiple occasions when he; and others like Kalyn Ponga from Newcastle, have been spoken of switching codes but with this bold move [so early], the outgoing captain will have to adapt quickly in 2022.

For an athlete who ‘cut his teeth’ in rugby union, the switch in codes will now feel quite alien. Different styles, advanced laws, and interpretations, and the varying roles of the backline mean it will be a huge effort to re-learn the modern game – after this current season ends.

“Rugby is down the line and all that stuff will happen later in the year but right now, my focus is with the Warriors.”

NZ Warriors club general manager Cameron George turned the conversation back to the upcoming season. While accepting the player’s request is admirable but, the business of playing rugby league still demands nine full months of concentration on that task. Warriors fans might need to show their loyalty in the short-term, as the player must do.

“We wish Roger all the best in 2022 and beyond. However, the important thing for us, our fans, our members, our commercial partners and, particularly Roger, is that 2021 is our focus.”

With 94 caps for the Warriors, the captain and fullback is likely to bring up a century of games, and will depart the game with over 200 NRL games; 112 of those with the Sydney Roosters where he won the Premiership in 2013.