As the Super Rugby Aotearoa, Super Rugby AU and Super Rugby Trans-Tasman competitions inch closer to kick-off, a panel of RugbyPass writers have taken it upon themselves to rank the best players across New Zealand and Australia in each position.

Some have gone for a statistical approach, while other have trusted their gut, but the end result has yielded a list of the top 10 players per position.

We have already revealed who we believe to be the best fullbacks, wings and midfielders throughout Australasia, but now we turn our focus to the flyhalves.

The writer-by-writer rankings will soon be available on Instagram, but here is the overall rankings that have been calculated as an average of the five scribes’ lists. 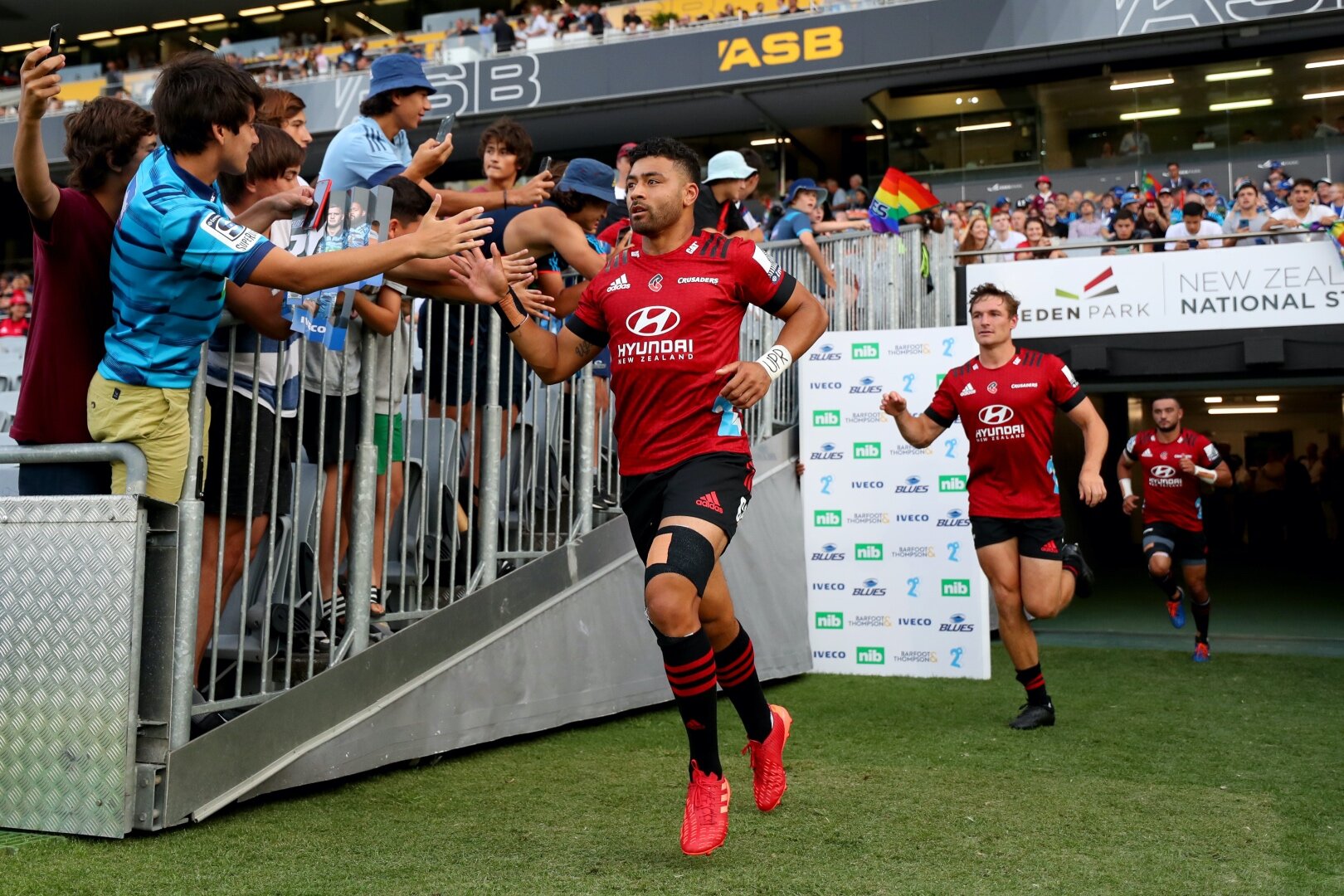 Richie Mo’unga runs out onto Eden Park with the Crusaders ahead of a clash with the Blues. (Photo / Getty Images)

The undisputed premier first-five in all of Super Rugby, Richie Mo’unga dominated the voting among our panel of writers, claiming top spot in each individual rankings.

That should come as no surprise given the way the 26-year-old starred for the Crusaders en route to their Super Rugby Aotearoa crown last year, bagging the competition’s MVP title along the way.

Brilliant on his feet and equipped with a vast range of skills – varying from quality distribution skills, a top-class kicking game and game-breaking vision – Mo’unga is by far the best No. 10 in Super Rugby, and it’s no stretch to say another MVP crown could be in the offing. 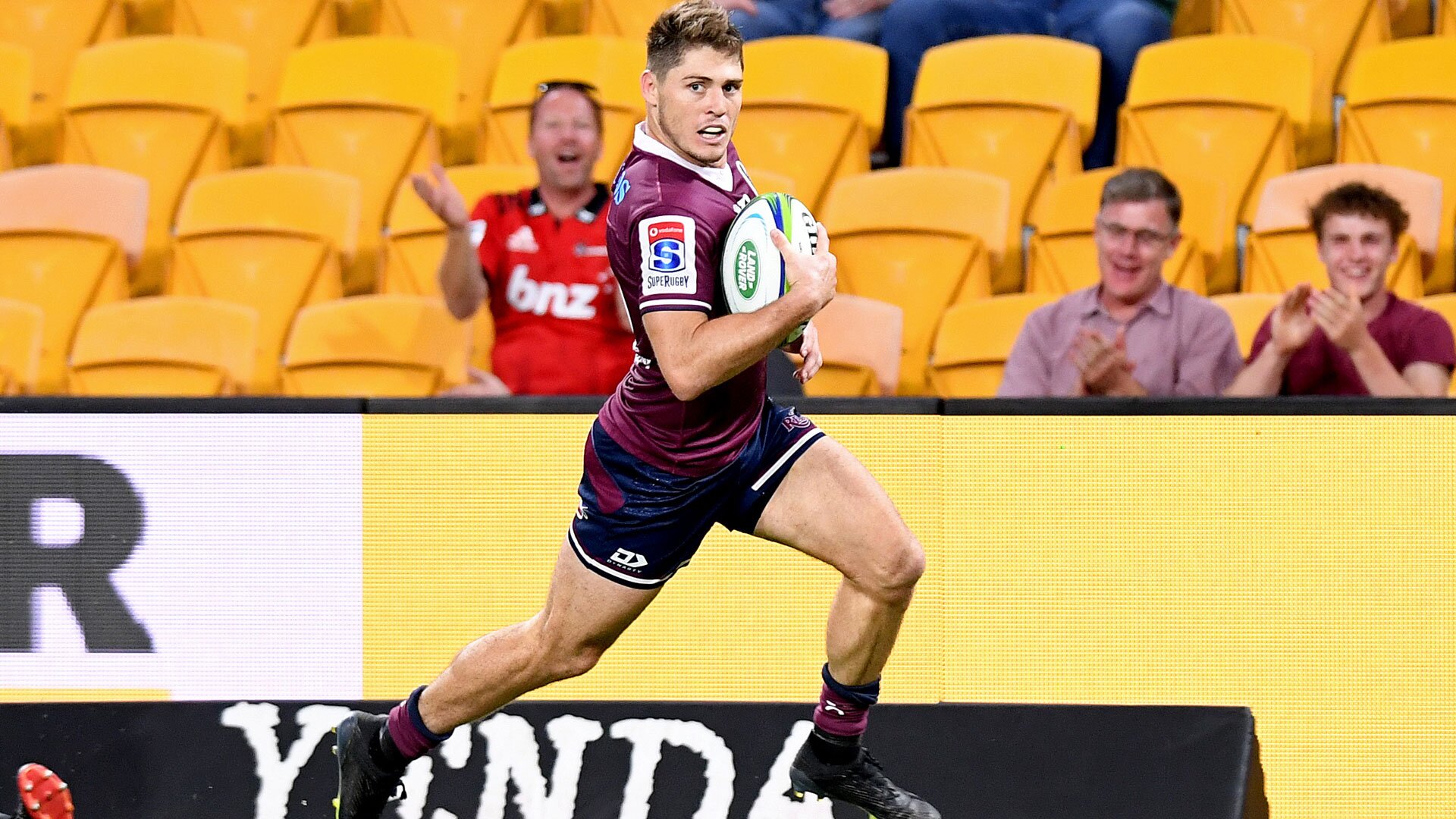 James O’Connor in action for the Reds. (Photo by Bradley Kanaris/Getty Images)

The influence James O’Connor imposed on the Reds after returning to the franchise from a stint in Europe last year was noticeably impactful in both Super Rugby pre-lockdown and in Super Rugby AU.

Thrust into the drivers seat of a young but extremely talented team with an exciting backline to boot, O’Connor provided the leadership and experience the Queensland side needed to make themselves title contenders for the Australian competition.

Initially starting out as a midfielder, a shift into the No. 10 role allowed those outside the 30-year-old to flourish as O’Connor picked apart opposition defences and unleashed the likes of Jordan Petaia, Hunter Paisami and Filipo Daugunu out wide.

Establishing himself as one of Australia’s top playmakers with the Wallabies last year, O’Connor once again stands as an integral member of the Reds camp as the Brisbane-based franchise look to build on their runners-up Super Rugby AU finish last year. 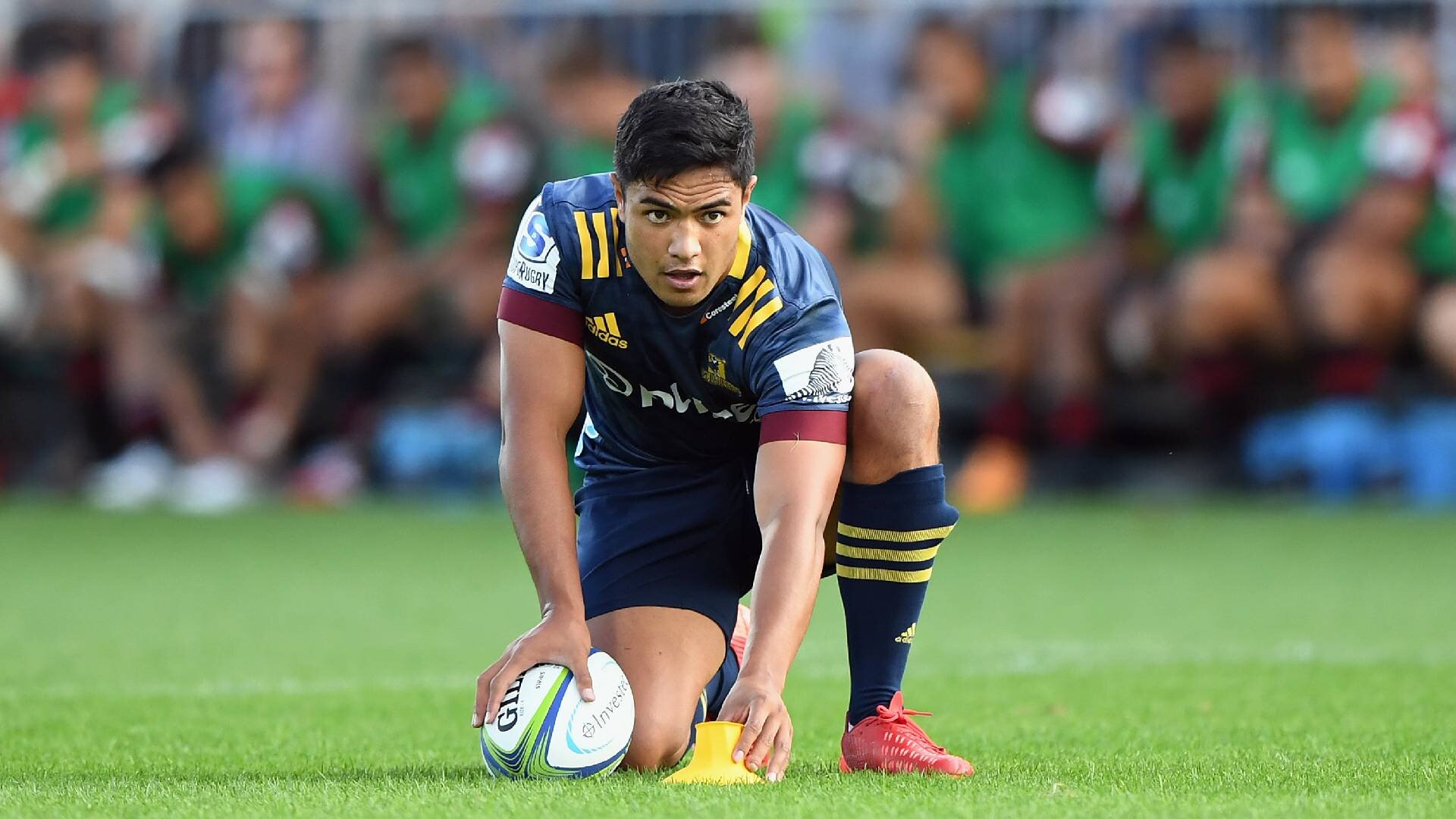 Josh Ioane lines up a kick at goal for the Highlanders. (Photo by Kai Schwoerer/Getty Images)

Bursting onto the scene with a breakout campaign in 2019, Josh Ioane has quickly become the obvious successor to Lima Sopoaga at the Highlanders.

Perhaps his greatest attribute is his running game, of which promptly brought him to prominence two years ago as his quick footwork and ability to pierce the defensive line earned him his sole All Blacks cap against Tonga in a World Cup warm-up clash.

Injuries and inconsistency have probably contributed to his inability to add to his test tally, but there is no questioning the talent Ioane has at his disposal, and if he can light up Super Rugby Aotearoa on a regular basis, a national recall wouldn’t be far off. 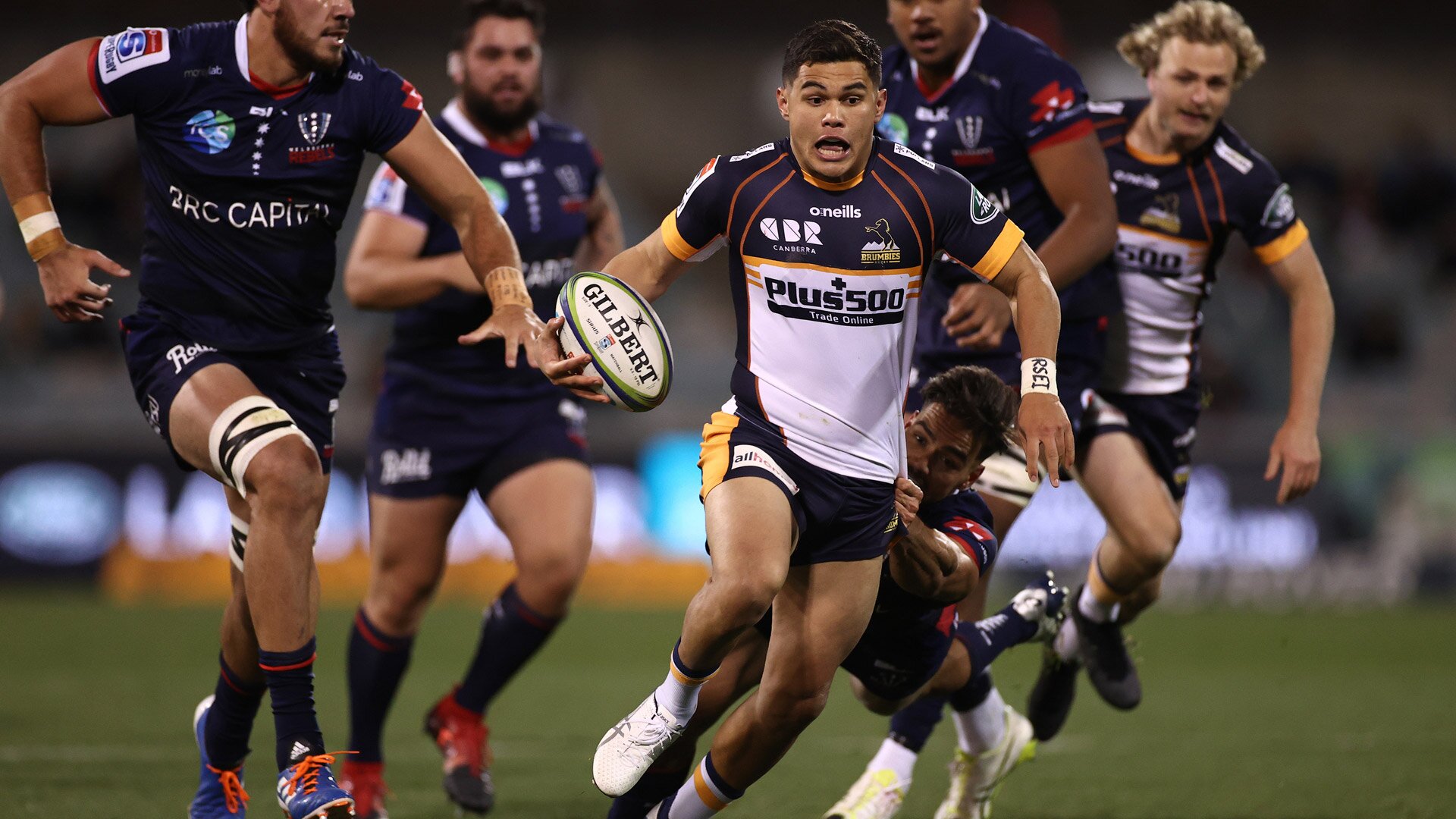 Emerging as one of the Australia’s brightest young prospects last year, Noah Lolesio looks primed for a long and fruitful career with both the Brumbies and Wallabies.

The 21-year-old was a star in his debut Super Rugby campaign in 2020, leading the Brumbies to a Super Rugby AU title, which is no mean feat given his youth and inexperience at that level while playing in a position that demands calmness, confidence and clarity.

All of those attributes were on show all year for Lolesio, who is again expected to play a similarly influential role for the Brumbies and challenge for a starting spot at the Wallabies in 2021. 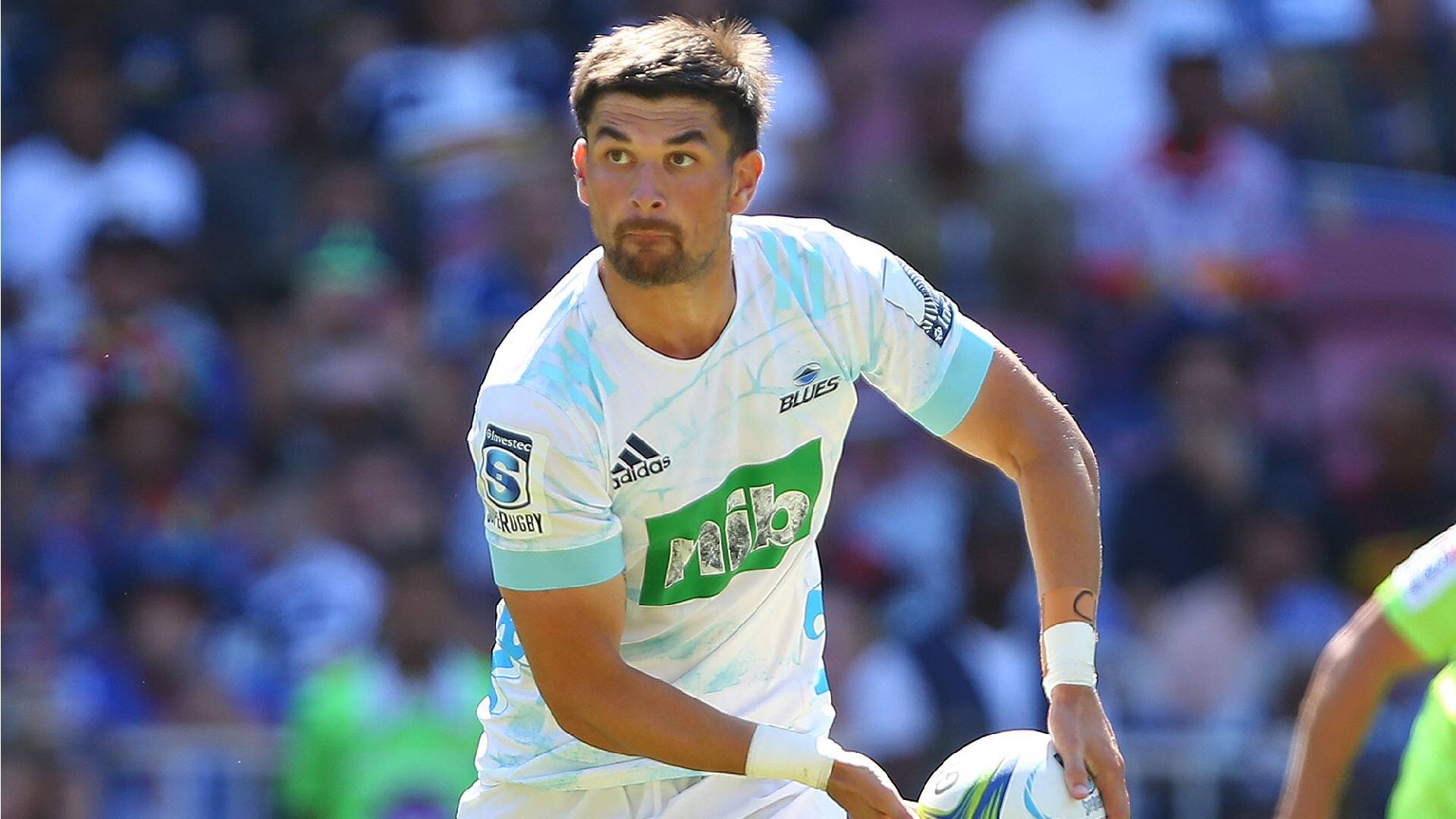 Otere Black in action for the Blues. (Photo by Carl Fourie/Gallo Images/Getty Images)

Even the addition of All Blacks playmaking star Beauden Barrett to the Blues wasn’t enough to dislodge Otere Black from the No. 10 jersey for most of Super Rugby Aotearoa last year.

Prior to Barrett’s arrival and deployment at fullback, Black was a key figure for the Auckland franchise before COVID-19 forced the suspension of the original Super Rugby competition, working brilliantly with No. 15 Stephen Perofeta.

Whether he was paired with Barrett or Perofeta in a dual playmaking scheme, Black oozed composure and coolness from the No. 10 jersey, contrasting well with the attacking flair of the aforementioned duo.

With Barrett now on sabbatical in Japan and Perofeta among a number of candidates to fill the void at fullback, it’s fair to say Black is the frontrunner for the first-five role and will be the steady head to whoever offers the excitement from the back. 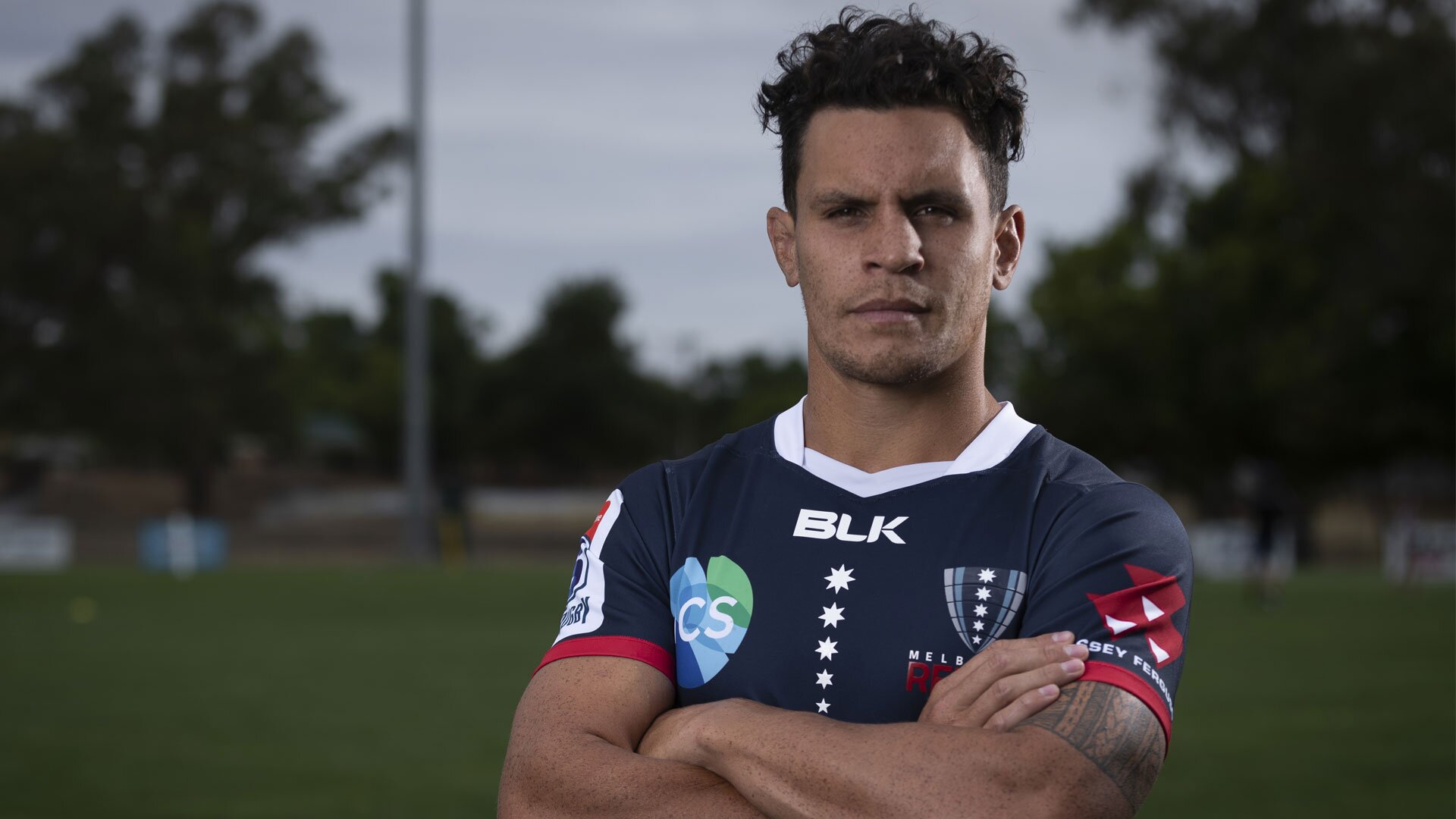 A veteran of the game, Matt Toomua is by far the most experienced player in the Melbourne Rebels set-up, boasting 54 test caps and well over 150 collective appearances across Super Rugby, Gallagher Premiership and Currie Cup level.

That experience and knowledge makes the 31-year-old a vital member of the franchise, as does his versatility (as a first-five and midfielder) and general playmaking ability.

How the Rebels fare this year will largely depend on whether Toomua remains fit and healthy and if he can work well in a halves partnership with new recruit and fellow Wallabies international Joe Powell. 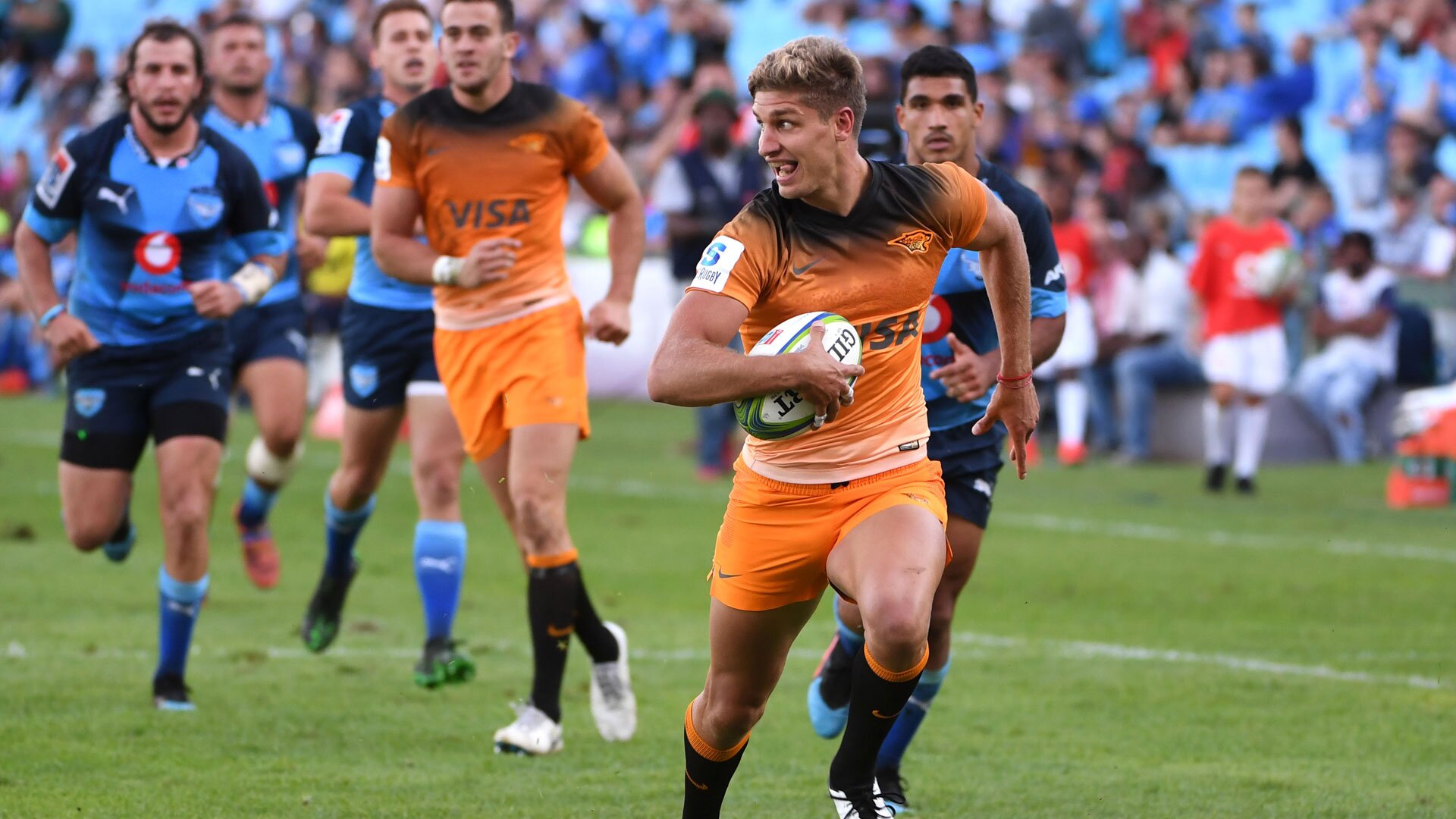 Former Jaguares star Domingo Miotti races away for a try against the Bulls. (Photo by Lee Warren/Gallo Images/Getty Images)

One of many foreign signings made by the Western Force ahead of their second campaign in Super Rugby AU, Los Pumas first-five Domingo Miotti could well be the best pickup of the lot for the Perth-based side.

Unlike many of those other players, though, the 24-year-old is still coming into his prime as a footballer and was a standout for the Jaguares last year following the departure of star flyhalf Nicolas Sanchez to Stade Francais.

Opportunities to continue to prove his worth after the COVID-19 lockdown were far and few between for Miotti, but if he’s given the chance to start for the Force, it will be worth taking note of what he can muster up at HBF Park. 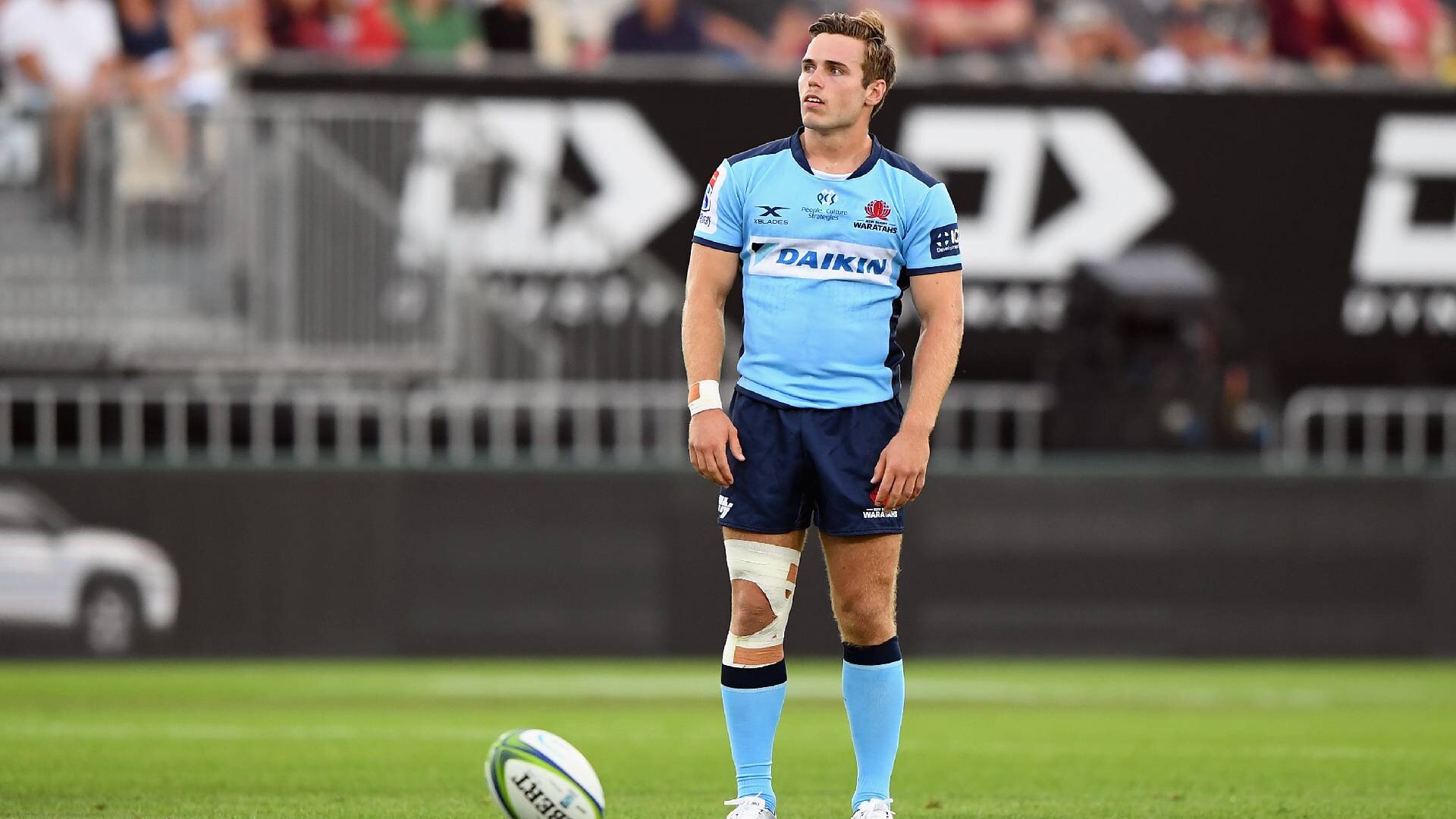 Will Harrison lines up a kick at goal for the Waratahs. (Photo by Kai Schwoerer/Getty Images)

Another promising young Australian pivot coming through the ranks, Will Harrison was a star in a lowly Waratahs outfit last year.

The 21-year-old still has plenty of development and growth left in his game, but his prowess with ball in hand and off the boot were noticeable throughout Super Rugby AU, leading to a Wallabies call-up after just one campaign for the Waratahs.

A test debut proved to be elusive for Harrison, with O’Connor, Lolesio, Toomua and Reece Hodge preferred at No. 10 instead, but the signs are there for a long and prosperous career in Australia.

The Queensland Reds have been dealt a significant injury blow as their captain Liam Wright will be sidelined for most of Super Rugby AU.https://t.co/q0tEbzvkja 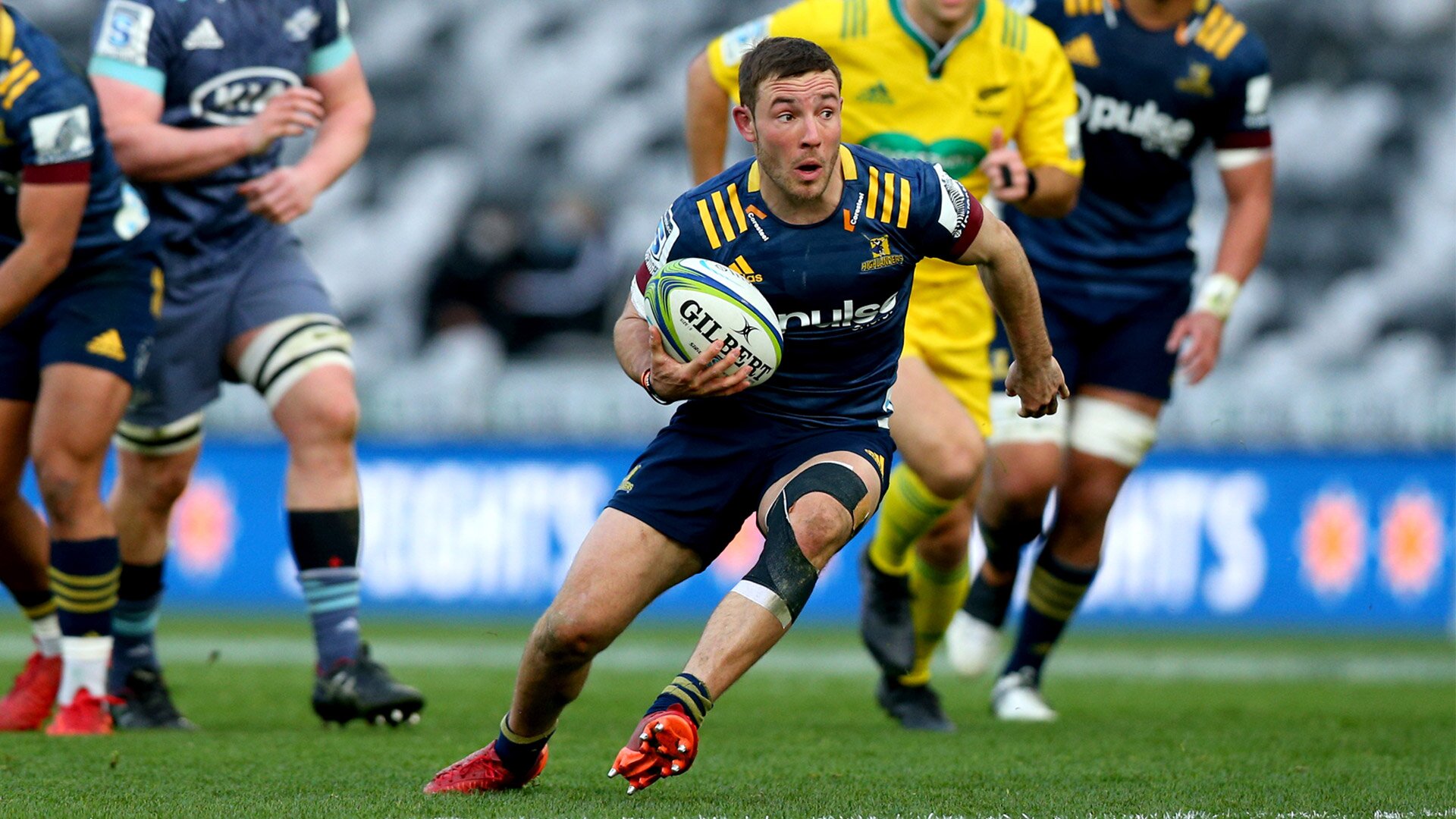 Mitch Hunt in action for the Highlanders. (Photo by Hagen Hopkins/Getty Images)

Moving to Dunedin from the Crusaders ahead of the 2020 season in pursuit of more game time, Mitch Hunt was a regular selection for the Highlanders all year.

Beginning his time at Forsyth Barr Stadium at first-five, Hunt pushed Ioane out of position into second five, although that move proved to be a flop, with the Highlanders attaining just one win from six outings before COVID-19 hit.

Upon their return to action in Super Rugby Aotearoa, though, the southerners began to pick up some momentum, especially towards the backend of their campaign, and much of that can be put down to the efforts of Hunt.

Improvements from the Highlanders’ forward pack allowed Hunt to shine in the injury-enforced absence of Ioane, while a shift to fullback following the latter’s return was a masterstroke move that has boosted Hunt’s stocks leading into 2021. 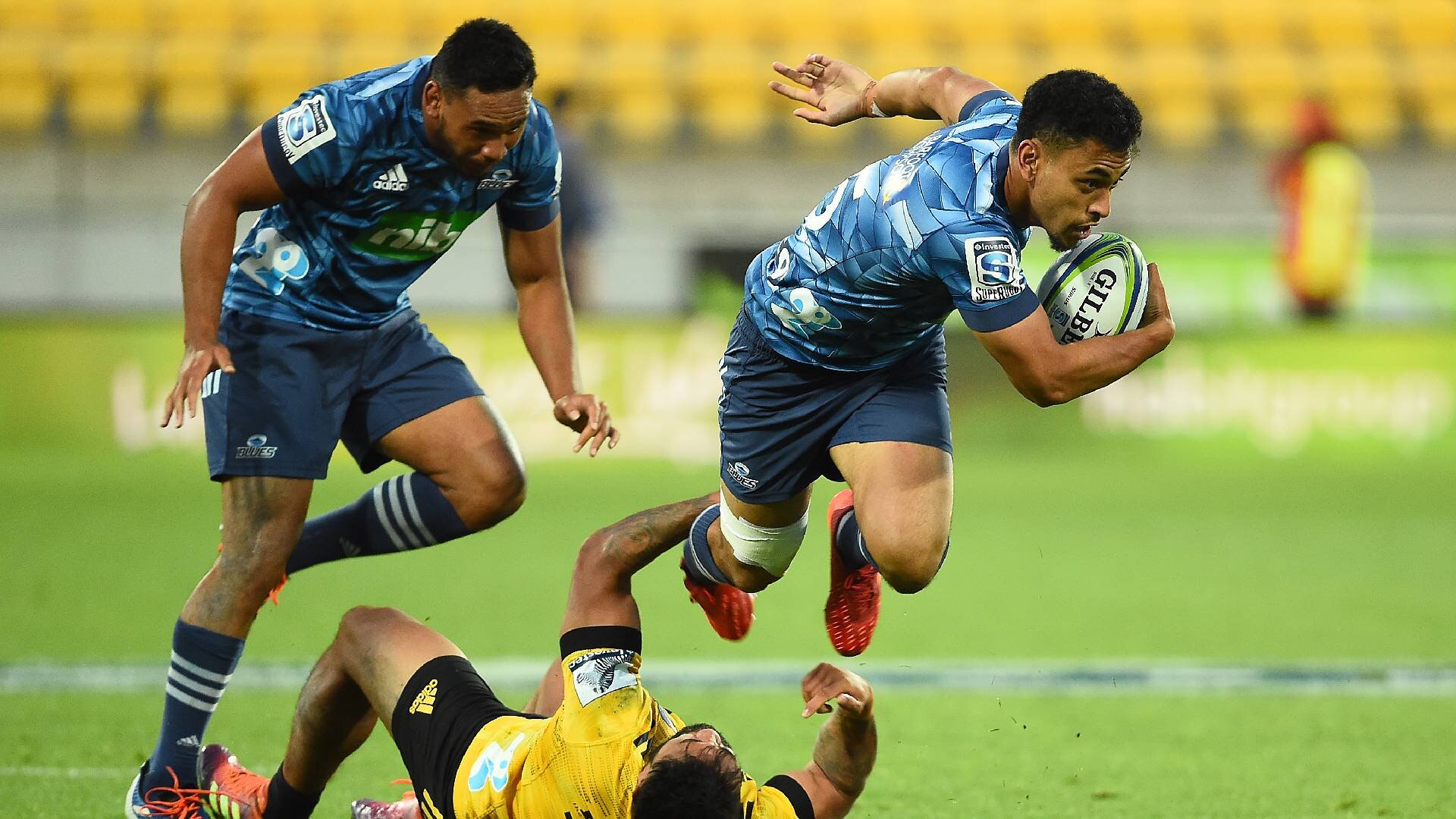 As mentioned earlier, the partnership struck between Black and Perofeta before Barrett was available for the Blues yielded regular success for the Aucklanders.

With Barrett gone for the season, the pairing of Black and Perofeta, which returned four straight wins to propel the Blues to the top four of Super Rugby leading into the COVID-19 lockdown.

Injuries and Barrett’s arrival prevented Perofeta from taking any further part in the Blues’ season, but the 23-year-old has long been touted as a talented prospect, and if the beginning of last year is anything to go by, this may be a coming of age season for him.

Six other players were selected by individual writers, but didn’t receive enough votes to make the overall cut.

Headlining the best of the rest was Jackson Garden-Bachop, who will spearhead the backline for the Hurricanes once again this year, while Western Force duo Jono Lance and Jake McIntyre were both tipped to challenge Miotti for a starting spot.

All three Chiefs pivots – Kaleb Trask, Bryn Gatland and Rivez Reihana – were acknowledged to varying degrees, indicating there is no clear cut candidate to don the No. 10 jersey for the Hamilton side.