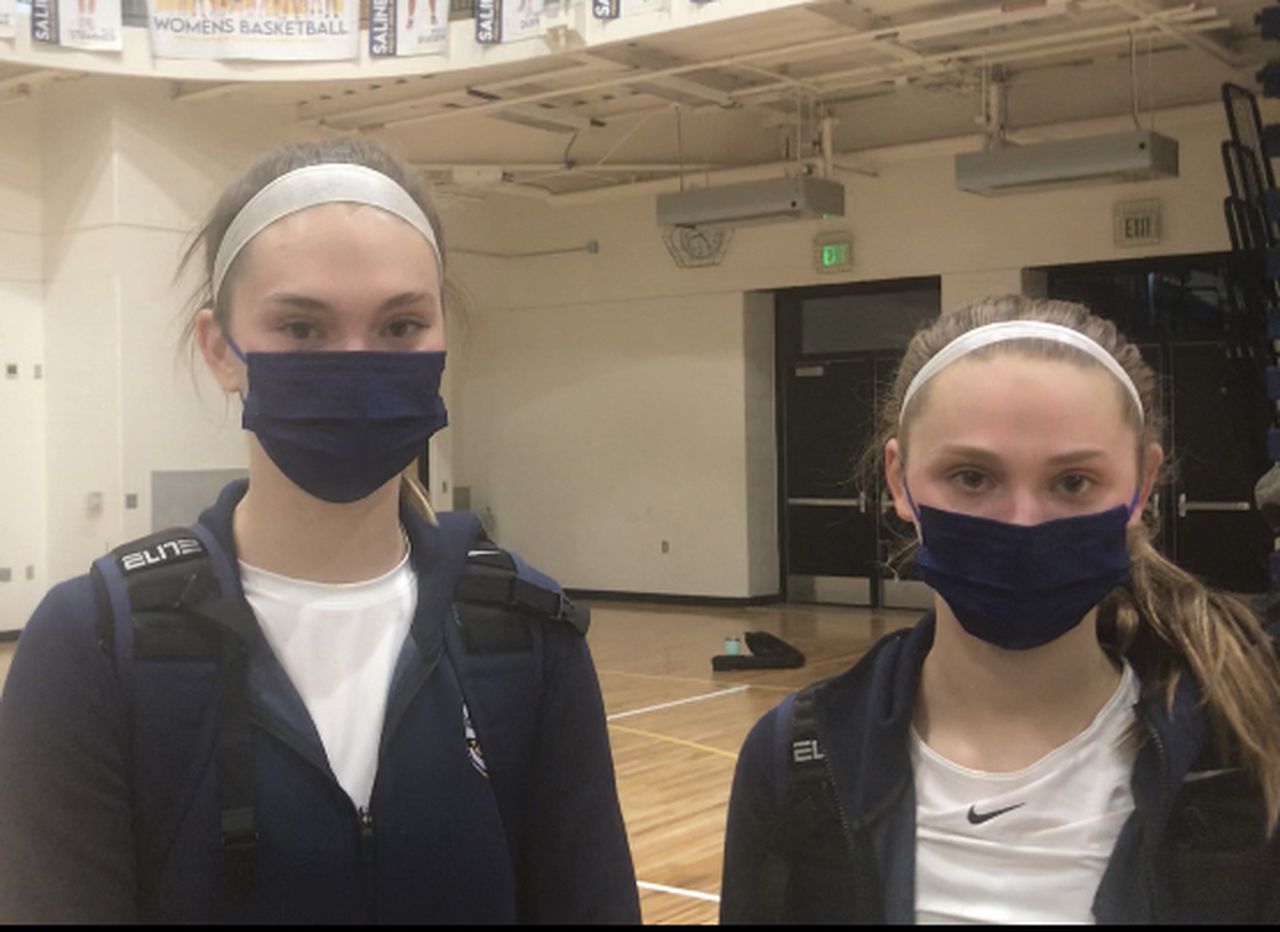 SALINE – Ella Stemmer looked down the court for an open teammate as seconds clicked down in the first half of Saline’s girls basketball season opener Tuesday night.

The senior star for the Hornets dribbled quickly past a Monroe defender and lofted a pass to her younger sister and freshman teammate, Kate, who was streaking down the left side of the floor.

Kate took the pass from Ella, took one dribble to the right and laid the ball up off the right side of the backboard for her first varsity basket.

It was only fitting that Kate’s first score came off an assist from her older sister and confidant on the hardwood.

“That was just huge, it was awesome,” Kate said after the game.

The play symbolized more than just two points on the scoreboard for Saline.

In a way, Ella’s pass to Kate could have been the passing of the torch as it was Ella’s last season opener with Saline and the beginning of Kate’s career as a Hornet.

It was a special moment for the Stemmer sisters, who have grown up around the game of basketball and are bonded by the sport they both love.

“I’m going to treasure these moments forever,” Ella said. “We’ve really bonded over basketball over the past year, especially coming to practice and stuff. But it was funny, I was like, encouraging her throughout the game any time she got nervous.

“Before the game we were digesting the plays, (discussing) what was going to happen, so it’s really great to have that leadership and show her the ropes.”

Love for the game

Basketball has always been a part of Ella and Kate’s lives.

Their father coached each of them during their younger years and molded them into to standout players.

Their mother learned more about the game and the family’s passion for basketball was so strong they began to make plans for family vacations around Ella and Kate’s summer basketball schedules.

The sisters spent countless hours practicing together and sometimes moments became so heated between the two that their competitiveness eventually took over.

“Let’s just say there have been black eyes and scratches on the face,” Kate said. “But we always come back together in the end.”

The Stemmers sister’s varsity careers started much the same way.

Ella was also a freshman on varsity and had to learn how to play the game at a faster pace and against players who were much older than her, like Kate is doing now.

But the 5-foot-10 senior guard began to gain confidence over the years and has developed into one of the best players in the state.

She was Ann Arbor Player of the Year and second team all-state last season and began her final year with the Hornets with a 31-point performance on Tuesday leading the way to a 66-27 win over Monroe.

Kate watched on as Ella performed much like many envision Kate will also one day when she gains more experience.

“Her basketball IQ is far above her youth,” Saline coach Leigh Ann Roehm said of Kate. “She has a poise and confidence about her even against the best competition. She will be a dynamic presence in the area for the next four years. She is super talented and ready to make an impact.”

The 5-foot-6 guard can shoot the ball and has the potential to be a top-notch defender, much like Ella is today.

For now, to help her younger sister transition more smoothly to the varsity ranks, Ella said she’s trying to instill in Kate the same things she learned as a newcomer to aid in Kate’s rise as a player.

“As a freshman, it’s just getting used to the varsity level,” Ella said. “I think playing AAU, that has definitely helped because AAU is a very fast-paced game, so I think that really sets us up. More so it’s confidence. Playing at the varsity level, you’re playing against a bunch of upperclassmen. We work hard, we definitely earn it, so coming in as a freshman if you get a shot, you shoot it. You deserve to be there.

“And another thing is just going into the contact; I think that also shows with confidence. That’s one thing I remember as a freshman on varsity. I always was scared of the contact, but as a senior, I think that’s definitely one thing I’ve evolved in and now, I’m seeing it in Kate as well.”