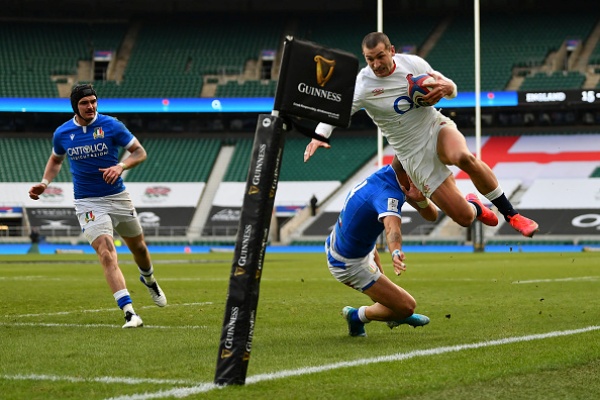 The England rugby team got their Six Nations campaign back on track with a 41-18 win against Italy. As per captain Owen Farrell’s post-match assessment, it was more like the ‘old’ England. But to say that England are back would be false. Once again discipline and unforced errors, 18 of them, blighted England. The form of Elliot Daly, Billy Vunipola and significantly Owen Farrell remains a very real concern. Italy deserves praise for a spirited performance in which the scoreline perhaps flattered the hosts. With a trip to Wales coming up in two weeks time, Eddie Jones has much to ponder.

What to do with Owen Farrell

One had to feel for Owen Farrell yesterday. Twice he shelled unforgiving passes and sent a knowing look to the skies. The reality for England was that Farrell had another tough day at the office. Moved to the centres to accommodate George Ford at fly-half, Farrell struggled to get into the game. As so often with this 10/12 combination it worked in parts. Ford did get England’s backline moving but Farrell struggled with his handling and influence. Farrell has many strengths but pace and setting his backs free are not amongst them. England’s backline was better against Italy simply because they had much more possession to work with. Henry Slade was much more influential than Farrell in the centres.

The reality is that Owen Farrell will not be dropped by Jones. But England’s backline is not gelling with Farrell at centre or at fly-half at the moment. Ollie Lawrence was very unlucky to be dropped for the Italy game and should come back for Wales. The balance of a Ford/Lawrence/Slade trio against Wales has its possibilities. This would be Jones’ toughest selection call yet but is one which has to be seriously considered.

England’s senior players not stepping up

The question marks around Billy Vunipola and Elliot Daly will not go away. It hardens the argument around whether the Saracens contingent should be picked, with Maro Itoje a notable exception. It is no surprise that they are struggling because they haven’t played for their club. The case of Vunipola is a frustrating one. He was better against Italy but the barnstorming, energy-sapping runs are not there. The desperately unlucky Jack Willis was a nonstop ball of energy when he came on. Ben Earl also. Eddie Jones has a plethora of options at number eight. One of Sam Simmonds and Alex Dombrandt surely has to be considered before the tournament is out?

Elliot Daly’s defensive frailties were exposed again by Italy. He was at fault for Italy’s first try and let Monty Ioane brush him aside all too easily in the second half. Watching the wonderful Stuart Hogg yesterday at Murrayfield pick apart Wales was in stark contrast to Daly’s work. Where Hogg is so good is that he always backs himself. Hogg runs with purpose with the ball in two hands meaning that the opposition is immediately on red alert. It gives Hogg that fraction of a second to take on the defender, shimmy and use his pace or bring his fellow attackers into play. Daly has similar attributes and has better dancing feet than most. But at the moment Daly is unsure of whether to back himself or pass. Max Malins is the next in line and should be given a go.

England’s discipline is an ongoing concern. They are giving away too many penalties, a lot of them avoidable. England will face much tougher tests against Wales, France and Ireland and they will not get away with it. It was not just the indiscipline that blighted England but the basics of passing. Ben Youngs had a shocker against Italy and too often one saw England players catching head high passes or reaching behind them to catch. The scrum had its moments but Ellis Genge again struggled when he came off the bench. England has a lot of work to do over the next two weeks in tightening up their basics.

Eddie Jones does not consider selection important judging by his pre-match comments. But for the first time in two years, he really needs to consider the balance of his team. It starts with his senior players. Experience in Cardiff is a necessity, and that is why it is highly unlikely that he will tinker with his team. If Farrell, Vunipola B and Daly do start then they must produce. The aforementioned trio are wonderful players and they can get back to form.

Ben Earl could come in for Courtney Lawes in the blindside jumper. Moving Lawes to partner Itoje in the second row. Tough on Exeter’s Jonny hill as he was one of England’s better players against Italy. There is no point considering one of Dombrant or Simmonds S because Jones will not pick them. Therefore Billy Vunipola has one more chance.

Similar to the position of Farrell. Jones will not drop him and therefore he stays at inside centre. Many would like to see a Ford/Lawrence/Slade combination. Malins replacing Daly is also an option..

Part of the allure of Jones is his entertaining jousting with the press. Long may it continue because we need some entertainment in these bleak times. But Jones has to really step up for the remainder of this Six Nations tournament. The England rugby team is nowhere near where they should be with the talent and firepower they have. There are serious questions on whether this England team needs an overhaul. Despite what Jones says about selection, it is vitally important. If he persists with this team, particularly the senior contingent then they have to step up. England has three immensely tough games coming up and there is no hiding place.