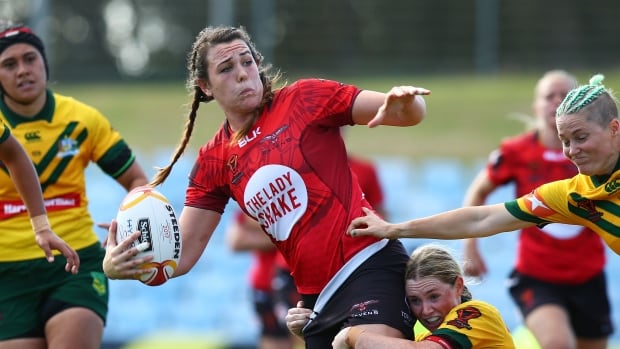 Footnotes for more established sports in Canada, perhaps, but a step forward for rugby league.

And the clock is ticking. Pandemic permitting, Canada’s women — known as the Ravens — will be showcased later this year at the Rugby League World Cup scheduled to run from Oct. 23 to Nov. 27 in England.

The good news is World Cup organizers are taking care of travel and accommodation costs.

A sponsorship committee is working on other partnerships to add to the Canadian team uniforms.

“We’re very close to getting a main sponsor but it hasn’t been finalized yet,” said Bob Jowett, president of the Canadian governing body.

Getting players together is difficult at the best of times, given Canada’s geography. An East-West game in January under the bubble at Toronto’s Lamport Stadium, with matches for both men and women, represents the only recent action.

“Unfortunately after that game, COVID came along and basically put paid to any further play,” said Jowett.

The Canadian women have camps scheduled for March, one in B.C. and the other in Ontario. They will be monitored from afar by Australian-based coach Mike Castle, if allowed to go ahead, with help from domestic coaches.

There are also camps scheduled for both sites in April and May. Jowett, who says Canada currently has a long list of around 80 players., hopes Castle will be on the ground for camps this summer.

The 61-game World Cup also includes men’s and wheelchair play. Canada is not represented in either competition.

The Canadian women debuted at the 2017 World Cup where the Ravens scored a historic first win — over Papua New Guinea — en route to the semifinals of the six-team competition.

Games have been hard to come by since.

Canada entered a team in the Commonwealth Nines, rugby league’s equivalent of rugby union’s sevens, held in February 2018 in Australia. And a Ravens Selects team, along with the Canadian men’s Wolverines side, toured Serbia in September 2019.