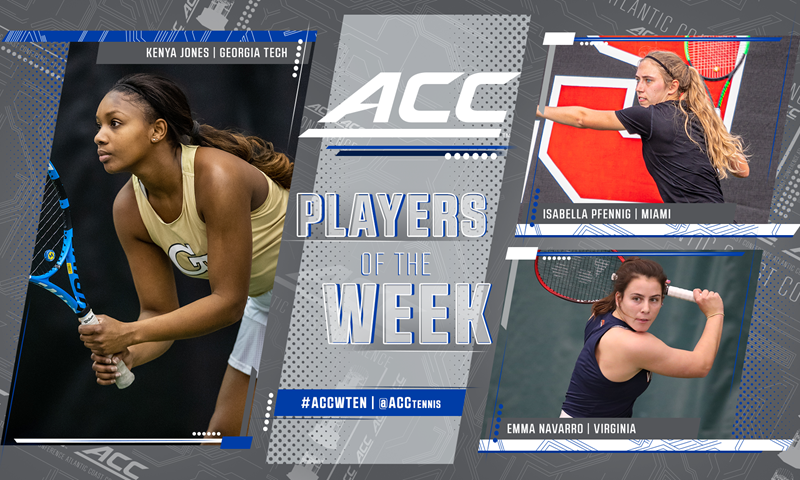 Greensboro, N.C. (theACC.com) – Georgia Tech’s Kenya Jones has been selected as the ACC Women’s Tennis Player of the Week, while Miami’s Isabella Pfennig and Virginia’s Emma Navarro have been named the Co-Freshmen of the Week.

The lone Hurricane to post a perfect record in singles and doubles on the week, Pfennig clinched Miami’s win over Clemson. The rookie from Gauting, Germany, defeated Georgia Tech’s 123rd-ranked Gia Cohen (3-6, 6-4, 7-6 [5]) and Clemson’s Jenna Thompson (6-3, 6-3) in singles. In doubles, Pfennig teamed up with Perez-Somarriba to defeat Georgia Tech’s pair of Cohen and Sophia Sassoli (6-0) and Clemson’s duo of Ali DeSpain and Mackenzy Middlebrooks (6-1).

Emma Navarro improved to 5-0 in singles to start her collegiate career with her biggest win, topping No. 3 Alexa Graham in the ACC opener against UNC. The freshman from Charleston, South Carolina, bounced back from being edged 7-5 in the first set to take the second 6-3 and eventually the super tiebreaker, 10-7.

Ultimate student: How will Federer leave his mark on future players? – Tennis Magazine