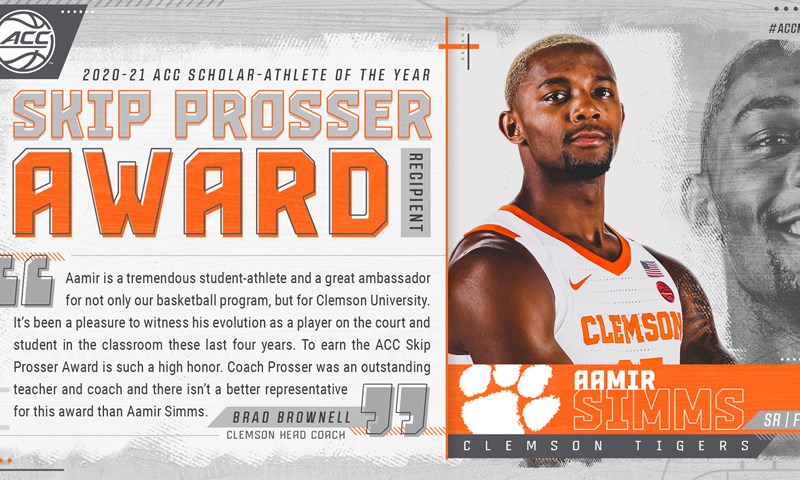 The Skip Prosser Award is presented annually to the top scholar-athlete in ACC men’s basketball.  It is named in memory of Wake Forest head basketball coach George Edward “Skip” Prosser, who passed away on July 26, 2007. Prosser compiled a 291-146 career record in 14 seasons as a head coach, including a 126-68 mark in his six years with Wake Forest. Every Wake Forest senior he coached graduated, and the Deacons placed nine players on the annual All-ACC Academic Basketball Team during his tenure.

To be nominated for the Skip Prosser Award, a student-athlete must be an upperclassman with a grade-point average of 3.0 or better – both in his career and in the previous two semesters. Sixty percent of the award is based on academic achievement and 40 percent on athletic accomplishments.

A native of Palmyra, Virginia, Simms earned his second career All-ACC honor Monday, claiming second-team honors after receiving third-team recognition last season. He is averaging 13.2 points, 6.1 rebounds and 2.6 assists. He is the only player in the league to lead his team in points, rebounds and assists, and is on track to do so for the second consecutive season. Simms also was the first Tiger to lead his team in scoring, rebounding, assists and blocks in the same season.

The 42nd player in program history to reach the 1,000-point plateau, Simms is one of just four players in Clemson history to amass 1,000 points, 550 rebounds, 150 assists, 75 steals and 75 blocks in a career, joining Trevor Booker, Horace Grant and Larry Nance. He was one of 15 players named to the Naismith Defensive Player of the Year Award Watch List and one of 10 players on the Karl Malone Watch List for the nation’s best power forward.

A member of the All-ACC Academic Team for the third straight season, Simms is a Dean’s List honoree, and recipient of ACC Academic Honor Roll laurels, and also has completed two for-credit internships with the non-profit US Play Coalition.

ACC Scholar-Athlete of the Year awards were established in September 2007 to be awarded annually to the top junior or senior student-athlete in their respective sports. Candidates for the awards must have maintained a 3.0 grade point average for their career as well as a 3.0 for each of the last two semesters. The award is based 60 percent on academic achievement and 40 percent on athletic accomplishment.

The ACC Honor Roll, which recognizes all conference student-athletes with a grade point average of 3.0 for the current academic year, will be released in July.