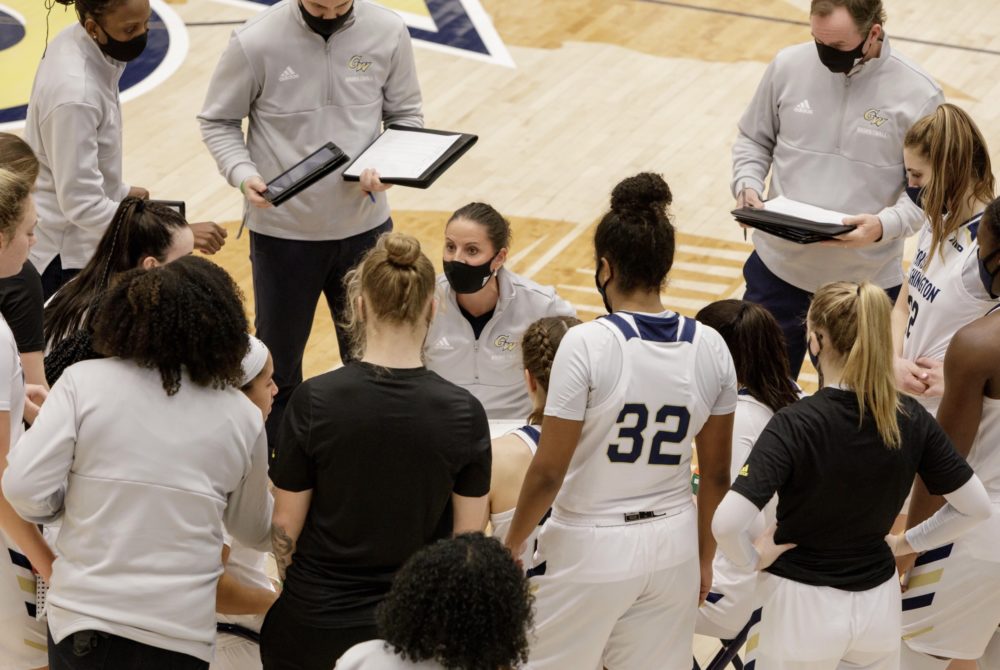 Head coach Jennifer Rizzotti helmed the program for five years. The athletic department announced that they would be parting ways with Rizzotti and her entire coaching staff Monday.

Women’s basketball head coach Jennifer Rizzotti has been fired from her position, officials announced in a release Monday.

Rizzotti joined the program in 2016 after a 17-year career helming Hartford’s program. She tallied a 72-74 overall record in her five seasons with the Colonials, winning one Atlantic 10 Championship in 2018.

“I’d like to thank Jen for her relentless drive and commitment to continue the winning tradition of our storied women’s basketball program,” Athletic Director Tanya Vogel said in the release. “We are particularly proud of her team’s efforts this year through their ‘Bigger Than Basketball’ initiative to bring awareness to multiple social justice and humanitarian efforts. We wish Jen, Sully and their family nothing but the best in their next chapter.”

Athletic department spokesperson Kevin Burke confirmed in an email that the entire coaching staff will not return to GW.

“I would also like to thank Ganiyat Adeduntan and Kevin DeMille for being extraordinary leaders in our department’s Diversity, Equity and Inclusion work,” Vogel said in the release.

The squad played its worst season in a decade, tallying an 8-21 overall and 3-11 A-10 record this year. The campaign ended 9-14 overall and 5-9 in conference competition, playing its final game in the second round of the A-10 tournament against Richmond.

Under Rizzotti’s tutelage, the program nabbed a 20-win season in 2016-17 but fell short in the A-10 quarterfinals and the first round of the WNIT. The squad bounced back in year two, winning the conference crown as the No. 5 seed and earning an automatic bid to the NCAA Tournament, losing to Ohio State in the first round.

The squad had sub-.500 seasons in her final three years at GW, combining for a 33-50 overall record and a 20-26 conference record.

Athletic department spokespeople Kevin Burke and Brian Sereno declined to facilitate interviews with student-athletes and Vogel, saying the department would not comment on “personnel matters.”

But 10 of the team’s 12 current members released a joint statement Monday saying the firings came as a “complete shock” to the program.

“Our coaching staff put us in the best position to be successful on and off the court, and as players the wins and losses are on us more than anyone” the players said in the statement. “This season our coaches encouraged us to use our platforms for topics bigger than basketball, in ways that were unmatched within our athletic department.”