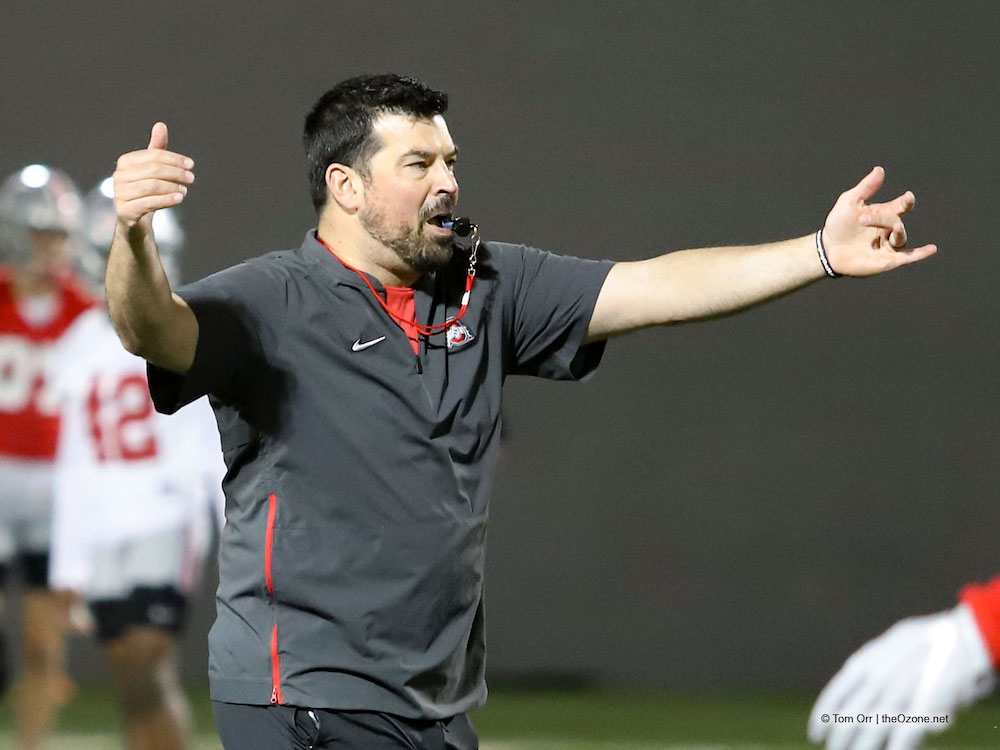 This Friday Ohio State will begin what had coach coach Ryan Day hopes will 15 days of spring football drills. Today Day met with media members to preview the start of spring drills. Here are some of the highlights.

Later Start – Day said OSU opted to start as late as possible this year at the suggestion of director of football performance Mickey Marotiti. Marotti felt the  Buckeyes needed at least seven weeks of weight room work before beginning spring ball. Those plans got somewhat of a monkey wrench thrown in when OSU recently had to suspend football activities due to a Covid-19 outbreak.  Day said the outbreak is over and that the players did a very good job of keeping up their running during the one-week organized workout shutdown.

Playing Depth – OSU played fewer players last year in what was at best an odd season.  The lack of practice time and fewer number of games made it impossible to give enough players reps to get ready to be on the field, so fewer players played. Day wants to return to playing more depth this year,  even at positions like wide receiver where players like Chris Olave and Garrett Wilson return. “If a player has earned playing time,” said Day, “that player will play.”

High praise for Zach- Day was reluctant to single out players who have stood out since the end of last season, but did mention defensive end Zach Harrison. According to Day “His body is changing and he has a different look in his eye.” Harrison has also stood out as a leader. The team recently formded a leadership committee comprised of two players from every class and Harrison was named to that committee. Day also mention senior offensive tackle Thayer Munford as a player who has made strides as a leader and was named to that committee.

Competition for positions: There is a lot of talent on this Buckeye team and a lot of positions up for grab. The position of largest focus is probably quarterback. Justin Fields has departed for the NFL leaving that position open. Three talented young players will be competing for the spot including returners Jack Miller and C.J. Stroud and incoming freshman Kyle McCord. That competition is expected to be fierce, but Day said that the most likely winner of the competition will be the player who does not get caught up in the competition itself but rather the player who can best-focus on learning,  getting better and focusing on eliminating mistakes. Day said the number one job of a quarterback is to be a leader, and the player who best exemplifies leadership qualities is going to have an inside track for the position. That means not getting caught up in friction due to competition for the position.

“Hoops” Day – Day confessed to being a really big basketball fan and very excited about OSU’s season this year. Day played basketball in high school and considered playing in college as well but ended up focusing on football. Day said the best part of his hoops game was his ability to shoot.

Injury Update – Two players coming back from injury this spring are defensive backs Cam Brown and Court William. Brown was a starter at corner last season until his season-ending injury and Williams was an incoming freshman safety. Day said that both remain limited, but that both should be able to participate in individual drills at the end of spring ball. Neither will be able to participate in contact drills.

Happy to have Washington –  Over the off-season linebacker coach Al Washington was courted by the University of Tennessee as a possible defensive coordinator. In the end Washington elected to remain with the Buckeyes which pleased Day. What did not please Day was the way Tennessee went about its business. Day would have preferred that the process was kept out of the media, as is usually is, but that was not the case with the Tennessee offer. Day sees Washington as a future coordinator and head coach and is very happy to have him on the OSU staff.

Defending Justin Fields- The upcoming NFL draft has seen a drop in the stock of quarterback Justin Fields. Most of that is due to some scouting reports that Fields does not read defenses well. Day took exception to those reports, saying that there are some NFL scouts that are very accurate, and others that are shall we say less that accurate. Day predicted that “Justin Fields will make plays in the NFL.”

Notre Dame Football: Irish have to be patient with Tyler Buchner – Slap the Sign