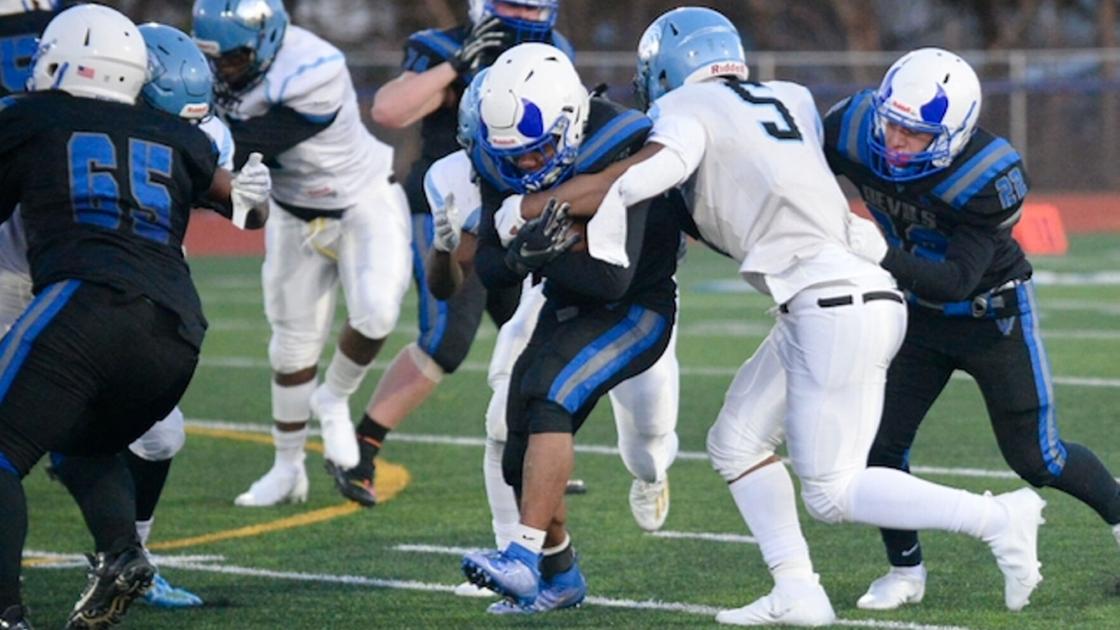 BATAVIA — After a long wait, the Batavia football team returned to action on Saturday night and looked like a well-oiled machine as the Blue Devils routed Bishop Kearney/Rochester Academy/Rochester Prep, 36-12, behind big performances from junior quarterback Jesse Reinhart and senior running back Terrez Smith.

Reinhart finished the blowout victory with a couple of touchdown passes, and Smith added a couple of scoring runs to power the Devils to 1-0 to begin the year.

“A complete effort tonight,” said Batavia head coach Brennan Briggs. “I was happy with the pursuit and the gang-tackle mentality. These guys competed and hit tonight.”

Batavia got off to a slow start, which was to be expected following an extended offseason. But the Blue Devils broke the seal before the first quarter was through, scoring on a 12-yard touchdown run from Smith with :44 seconds remaining in the opening frame.

On the ensuing kickoff, tragedy struck for the Kings, as Jami Walker was injured on the play and was subsequently carted off the field by a Mercy EMS team dispatched to Van Detta Stadium. The City of Batavia Fire Department also responded to the call, as Walker appeared to suffer from a leg injury that required immediate care. Play resumed following a lengthy injury timeout.

On the first play from scrimmage after the injury, the Kings fumbled the ball back to the Blue Devils, who took over with prime field position at the BK 24 yard line. Batavia failed to score on the ensuing drive, giving the ball back to BK at their own 16-yard line.

The Kings were able to work the ball all way to the 35-yard line on a long run from Shia Patton, but a holding penalty erased the big gain and set BK back to their own eight-yard line. Two plays later, Jayden Osborne recorded a safety for the Devils, who took a 9-0 advantage with 9:42 to go in the first half.

The rest was history, as Batavia carried a 23-0 lead into halftime and increased their advantage to 30-0 in the third.

“I was proud of Terrez. He had to work for his yards tonight,” said Briggs. “There were drives where he was frustrated, but he kept plugging away. He was positive with his teammates and his lineman blocking for him. When he carries the ball 25 times, he is bound to bust a couple, which is what he did.”

Batavia’s multi-faceted attack offensively was powered in part by 157 passing yards from Reinhart, who completed 10 of 16 passes, including two touchdowns and an interception.

“I was pleased with Jesse and his efforts,” said Briggs. “He stayed composed and made the plays he needed to. He also extended a few plays and made some big throws.”

Reinhart had men running free all night long as the Blue Devils’ wide receivers performed well as a group. Aidan Anderson finished with two catches for 57 yards and a touchdown, while Tyler Budzinack made two grabs for 38 yards and a score. Alex Hale caught three balls for 39 yards.

“Our wide receivers did a great job,” added Briggs. “Alex is a great athlete that sees the field well. He’s like a coach out there. ‘Budz’ also showed his athleticism tonight. Aidan is a great weapon. He is so quick and catches the ball well.”

Defensively, Batavia was led by Ethan Loaeaza, who made eight tackles. Osborne made six tackles, and Hale added an interception.

“I was also very pleased with our kickoff coverage team,” said Briggs.

Batavia is now 1-0 and looks ahead to a matchup with Wayne on Saturday.

The defending champion Irish kicked off their season with a massive win over the Lions behind a 100-yard game from running back Dylan Warner. The Notre Dame senior finished with 10 carries for 105 rushing yards and two touchdowns and came away with four tackles and a sack on defense.

“I was mostly pleased with our defense today,” said Irish head coach Joe Zambito. “We missed a few tackles and blew a few assignments in contain, but I’m sometimes a tough coach to please. We have to thrive to get better and can never be complacent.”

The Irish went ahead, 8-0 after the first quarter, and then poured on 24 points in the second to take a 32-0 advantage into halftime.

Along with Warner’s big effort, junior QB Collin McCulley performed well in the victory. McCulley finished with 119 yards on 12 of 20 passing to go with a touchdown and two successful two-point conversions. The ND junior missed most of last season with a chest injury.

“Collin is such a pleasure to coach,” said Zambito. “He’s a really easy-going young man who thrives on learning more about the game and molding his craft. I thought he was spectacular today. He moved the pocket well and was on target.

Anthony Zambito made seven receptions and took them for 38 yards while catching two two-point conversion passes and coming away with six tackles defensively. Alonso Storey made one catch for a seven-yard touchdown while making four tackles and recovering a fumble on defense. Cody Henry carried the ball 10 times for 62 yards and a six-yard touchdown run. He also had a big afternoon on defense, making eight tackles, recording an interception and coming away with two sacks.

Connor McWilliams made four tackles, five sacks and a blocked punt that he recovered for a TD. Vincent DiRisio scored on an 18-yard run for his first career touchdown, and Donato Fiorentino made seven tackles while coming away with two sacks.

The Irish are now 1-0 and look ahead to matchup with Cal-Mum/Byron-Bergen next week.

“Their quarterback (junior Kyle Wade) is exceptional,” said Zambito about the Raiders. “We’re going to have to do a much better job tackling and in containment if we want to succeed. It looks like they like to spread you out and then get physical. We better have our A-game. Offensively for us, our line has to come to play. Hopefully, we can give them a game.”

A move to 11-man football didn’t slow down the two-time defending eight-man football champions, as the Aggies rolled past the Rebels behind five rushing touchdowns from senior RB Ty Mott. Mott finished the game with 213 rushing yards on 19 carries.

“Ty is such a great kid,” said O-A/E head coach Tyler Winter. “He works hard in everything he does. I’m happy for his performance today and excited for what the rest of his senior season has in store for him.”

The Aggies recorded a team total of 511 rushing yards in the win.

“With such little time together with our full team thus far, I felt that our guys were able to come out early and execute at a high level,” said Winter. “The offense played with a nice flow.”

Senior defensive back Zach Howard came away with an interception and a tackle for loss, while senior linebacker Peyton Yasses made seven tackles to lead the O-A/E defense.

“Defensively, our guys played physical and stayed disciplined for four quarters,” added Winter. “I’m happy for our team and proud of the commitment they’re showing for one another.”

O-A/E heads into its Week 2 matchup with Geneseo/Mt. Morris at 1-0.

As an Amazon Associate I earn from qualifying purchases.