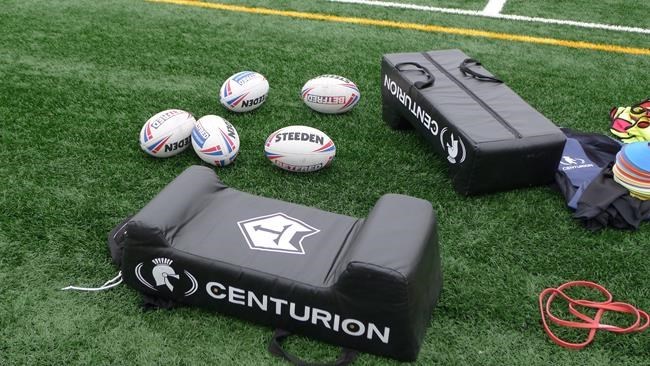 A new professional rugby league circuit is set to kick off this summer in North America.

Organizers of the North American Rugby League say play will begin in June with 12 American teams. Two Canadian franchises, in Toronto and Ottawa, are slated to join in 2022.

The Toronto team will be known as the Wolfpack but will be a separate entity from the franchise that collapsed last year after standing down in July from England’s Super League due to financial problems. The other Canadian franchise will be the Ottawa Aces, who are slated to join the third tier of English rugby league next year.

Aces president Eric Perez called it “the dawn of a new era for professional rugby league, not just in Canada but across the North American continent.”

A private group has purchased the intellectual property of the Wolfpack, whose bid to re-enter the Super League in 2022 under new ownership was voted down in November.

In an interview, Perez said the Aces could field teams in both the North American and English leagues.

“I’m not guaranteeing that’s going to happen. But we’re going to be 100 per cent in the NARL,” said Perez, a longtime rugby league enthusiast who founded the Wolfpack before establishing his own team in Ottawa. “COVID pending, we’ll be in the RFL (England’s Rugby Football League), but obviously COVID is a major factor. in that.”

The NARL will play rugby league, the 13-player rugby code that is mainly played in England, Australia and New Zealand, along with some presence in France and the Pacific Islands. Major League Rugby, a 12-team North American circuit in its fourth year with the Toronto Arrows the lone Canadian entry, plays rugby union — the more popular 15-player version of the game that is featured every four years in the Rugby World Cup.

NARL organizers say the first round of U.S. competition will start June 19 in Brooklyn and June 20 in Las Vegas. Games will continue to be played in one stadium on one day this season with no fans due to COVID-19.

Due to pandemic-related travel restrictions, the Canadian teams won’t join in 2021. Instead Toronto and Ottawa are working on meeting in a “Canada Cup” on home soil, possibly in August.

Perez said while there are different ownership groups, league organizers will hold an small ownership stake in some teams. He described the backers of the new league as “very solid.” The league did not specify ownership in its initial release.

Robert Curtis, the NARL’s head of operations, called the new league ” the next big evolutionary step for rugby league.”

“The NARL is the culmination of years of research and market testing and has been designed to bring you the hardest-hitting, fastest and most exciting sport on the planet,” he said in a statement.

NARL games will be broadcast via the SportsFlick online streaming service.

Bob Jowett, chairman of the Canada Rugby League Association, said the NARL has his group’s support given a condition of teams joining the new league is supporting grassroots development.

“The formation of a North American professional rugby league competition has long been discussed and is considered to be a key progression for the sport,” he said.

Perez said while the new league will feature international players, it will have a “major focus” on domestic talent. That will mean a steep learning curve given how few North Americans currently play the game.

This report by The Canadian Press was first published March 31, 2021