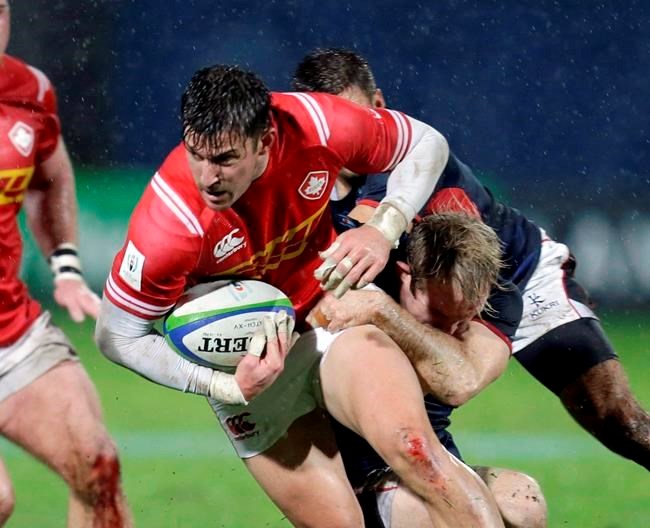 Van der Merwe, Canada’s all-time leading try-scorer, played with many of the Arrows for Canada.

“It will be nice to hopefully catch up with some of these guys,” he said. “Now that I’m here in this league, I follow what they do and how they play a lot more than when I was overseas. It’s good to see some of the guys really putting their hand up and playing well.”

The Arrows have set up shop in suburban Atlanta, where they are sharing facilities with Rugby ATL, due to pandemic-related border restrictions. But because Life University’s Lupo Family Field in Marietta isn’t available Saturday, the home game against the Giltinis is being played in Metairie, La., as the first half of a doubleheader that sees NOLA Gold host the Austin Gilgronis.

The Giltinis and Gilgronis, named after cocktails, are both owned by Australian entrepreneur Adam Gilchrist.

Van der Merwe is rubbing shoulders with some marquee names in Los Angeles.

The Giltinis have a definite Australian flavour with star players Adam Ashley-Cooper and Matt Giteau having earned 224 caps for the Wallabies between them. Head coach Darren Coleman, once a player-coach with the Calgary Saints and Calgary Mavericks, is Australian as are assistant coach Stephen Hoiles and GM Adam Freier, both former Wallabies.

Stevens, a hooker, is eligible to play for Canada though his grandfather.

“It’s a great environment for some of the young North American players to learn off some of the greatest players in the world,” said the 34-year-old van der Merwe, who signed a two-year deal with the Giltinis in November.

Canadian Alana Gattinger is the Giltinis’ director of business operations. The native of Whitby, Ont., was Canada’s team manager at the 2019 Rugby World Cup.

A veteran of four World Cups and 61 tests, van der Merwe is Canada’s all-time leading try-scorer with 38 over an international career that stretched from 2006 to 2019. He captained Canada five times.

He announced his retirement from international rugby in October 2019.

At the club level, van der Merwe led Scotland’s Glasgow Warriors with 54 tries (in 123 appearances). He also had stints with Scarlets in Wales and the Newcastle Falcons in England.

Van der Merwe is already enjoying Los Angeles, soaking up the sun “for a change.”

“It’s been a lot of years in the U.K. with not much sun,” he said with a chuckle.

As for playing for the L.A. franchise, he calls it a “dream come true.”

The Giltinis held a five-week training camp in Hawaii, where van der Merwe said they worked hard and played hard when they had time off.

With the Giltinis having a bye last week, van der Merwe was reunited with Canadian wife Gillian and kids Nola, Lochie and Harlow. They left the family home in Victoria and he flew to Seattle to meet them before driving down together to their new digs in Hermosa Beach.

Their children, aged three (as of Sunday), five and seven, are making the most of the nearby beach.

“The kids are loving it,” he said.

On the field, Los Angeles has been a success out of the box with two home wins, albeit in an empty Los Angeles Coliseum.

The Giltinis opened with a 42-27 win over the New England Free Jacks with van der Merwe scoring the first two tries in franchise history. L.A. then thumped the defending champion Seattle Seawolves 57-26, a game van der Merwe missed due to a “bit of a niggle.”

He is available for Saturday’s game against Toronto.

The L.A. team expects to have some fans in the stands at its next home game, April 24 against the San Diego Legion.

Toronto lost its first two outings — 21-14 to Rugby ATL and 39-24 to the Utah Warriors — before bouncing back to beat Old Glory DC 40-9 last Saturday.

Van der Merwe had hoped to stay in Glasgow after his contract expired. But he was told in February 2020 that was not going to be the case. He considered France but the L.A. opportunity came via a reference from former James Bay AA teammate Dan Harlow, who had been coached by Coleman in Calgary.

The pandemic delayed his entry into MLR with van der Merwe splitting lockdown time between Glasgow and Victoria.

Van der Merwe was born and raised in Worcester, South Africa. His father, a doctor, brought his family of five to Saskatchewan in 2003 for a better future.

DTH played club rugby in Saskatchewan and then Victoria, with James Bay. And, after satisfying rugby’s residency requirements, he made his debut for Canada against Barbados in June 2006.

Born April 28, he shares his birthday and name — Daniel Tailliferre Hauman — with his father. His dad was called DTH until university but became Danny when he became a doctor.

This report by The Canadian Press was first published April 9, 2021

No global rugby calendar until at least 2024 – planetrugby.com