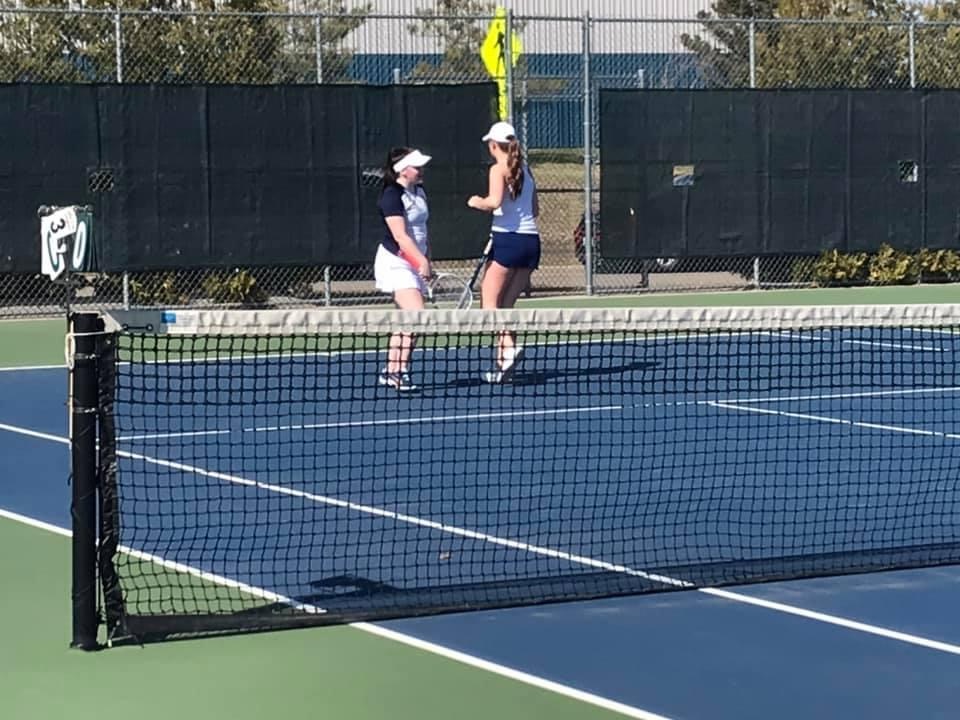 VALLEY CITY, N.D. (NewsDakota.com/Matt Nielson) – It has been nearly two years off, but Valley City Hi-Liner tennis returned Thursday hosting Wahpeton in an Eastern Dakota Conference match. The Hi-Liners came away with a 7-2 win.

This is a new season with a new team.  We have exactly 120 individual matches of varsity experience on our squad which is equivalent to four players have one full season of experience.  Masie returns with 46 matches of experience and is our senior leader.  Olivia (10th grade) and Breck (9th grade) both had good seasons two years ago racking up a combined 19 wins.  Lexia is a senior and is quickly becoming our doubles specialist.

Some may look at a 7-2 score and think that we had this match in hand; we did not.  We won three of our matches in third sets.  If the Huskies could have pulled out those three third sets, they would have won the duel 5-4.  It was a competitive match all the way around and was a good first match for us.

Dodge and Comings are two solid players for Wahpeton and executed a great match against us at #1 doubles.  Breck and Olivia were our #5 and #6 last time we had a season.  They are now at #1 and #2 and #1 doubles.  We will have a learning curve, but these two have great attitudes and will become stronger and smarter on the tennis courts with more experience throughout the season.  Olivia had good point development in singles.  She knows what she wants to do.  With practice and experience, those points she develops will turn into point wins.  Keep working hard and be patient – it will come Olivia!  Breck played a fabulous first set in singles.  After dropping the second, she was able to keep composure and win it in three.  Wins at #1 are never to be taken lightly.  You earned it today for your first every #1 singles victory.  Nice resilience Breck!

At #2 doubles, Maisie and Amber (11th grade) played their first real match together.  We played very tentative and tight in the first set.  We relaxed and used positive energy in the second set leading to more consistency and winning the set.  In the third set, we jumped up to a 5-2 lead.  At 5-3, Wahpeton rocketed a ball and hit Amber in the ear causing her earing to fly off.  We found both pieces of the earing, but it was a solid shot that left Amber with a painful red ear.  After a short break, Wahpeton won the very next points to close the gap to 5-4.  It would have been easy for Amber and Maisie to let that event get in their heads – especially with dropping two games in a row.  They didn’t.  They continued to fight and was rewarded with the win in the very next games.  Great determination ladies.   In singles – they both cruised to victories by finding the way to win points against their opponents and then continuing to execute that plan each point.

At #3 doubles, Abby (10th grade) and Lexia played well together.  Lexia is a beast at the net while Abby is very solid at the baseline.  They will be a formidable opponent for any #3 doubles team in the EDC.  That doubles win was Abby’s first ever varsity victory.  She followed that up with a bagel breadstick singles victory.  Abby is moving the ball around while hitting with topspin and depth.  She is figuring out where to be on the court as well.  Kailee (7th grade)  was the lone player with zero varsity experience in our line-up and she pulled out a victory in her first ever varsity match in a super-tiebreaker.  Kailee is a scrapper that runs down balls and counterpunches.  She executed hitting to her opponents backhand and keeping the ball in play.  Nice job Lexia, Abby, and Kailee!

On the JV side, we were able to play 16 singles matches and dropped only 1.  Our players buy in to what we do and execute on the court.  Ari is a senior and came out for tennis for the first time this season.  She put a lot of work in last summer.  She won her match today 6-0 for her first win ever.  Another first time player was 7th grader Georgia Zaun; she won her two matches while dropping only two games.  Congrats Ari and Georgia.

Next action is tomorrow at 4pm at Sheyenne (hopefully…)