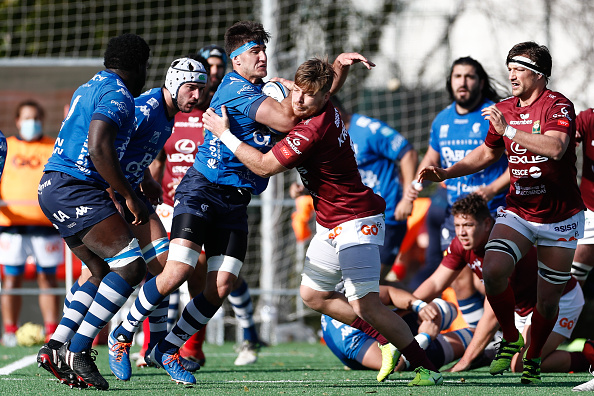 Well time flies and we are already knocking on the door of May. We’re less than two months away from the restart of Rugby Europe 2021 and the critical Rugby World Cup Qualifiers. However, there’s plenty of domestic rugby left in Spain to be crammed in before that date, including the Copa Del Rey de Rugby Semi Finals.

This coming week, the top half of Division de Honor takes a break from regualr competition, for the Copa Del Rey de Rugby Semi Finals. And one game offers the potential of a changing of the guard.

Copa Del Rey de Rugby teams ‘up for the Cup’

First won by Barcelona back in 1926, it is a competition that has the historical prestige and one-off game that Spanish Rugby has (before Covid) been able to build into an event fixture. Indeed, it was only five years ago that 26,500 people (including the King of Spain) were in Valladolid to watch El Salvador triumph over VRAC. Here’s hoping that next year Spanish rugby can seek to rebuild this historic final’s crowds.

In modern times, the competition has been dominated by teams from Vallodolid, with either El Salvador or VRAC featuring in the final for the last ten years. However, the emergence of Madrid-based Alcobendas (see main photo) is shifting the balance of power in Spanish Rugby.

Having won the last two Cup finals, Alcobendas face El Salvador in the semi-finals this weekend. Should they win, it will mean the constant of Vallodolid having a team in the final is ended and for Alcobendas, a chance at a historic third Cup in a row.

In the other semi-final, the team with the most Cups of all time (Barcelona holding an unmatched 16) meets a side who have been enjoying their own meteoric rise, in Aparejadores Rugby of Burgos. Aparejadores has enjoyed three promotions in the last ten years to firmly establish itself in the top flight. Aparejadores have never been to the Cup final and Barcelona’s last Cup win came in 1985. A win this weekend will give both a chance to make history.

The fact that we have four teams from four different regions competing to reach the final can only be a boost to the game. Yes, the Valladolid rivalry of VRAC and El Salvador gives the sport a talking point in the football-obsessed nation and has delivered great moments (such as the aforementioned 2016 Final).

For the sport of rugby union to grow into the next decade, having a full list of teams across the nation that can be successful will be vital.

Away from the glamour of Cup semi-finals is the uglier business of relegation dog fights.  With most teams only having one game left in the bottom half, one result could decide who finds themselves relegated for 2021/22. This weekend, bottom of the table Gexto take on Valencia’s Las Abelles. Should second from bottom Las Abelles lose, they will finish bottom and be relegated but if Gexto lose, they’ve got one more game left to save their skins.

Unless, that is, third from bottom manage to secure the win they need this weekend to stay up.  The league split has certainly given the league the all-or-nothing games that make for a great spectacle. With fans allowed back from next season, could the split be something worth keeping?

Cup winners, League Champions and Spanish Rugby World Cup hopes will be determined in the next 12 weeks. So buckle up as a hectic few months of Rugby Union in Spain is about to begin.