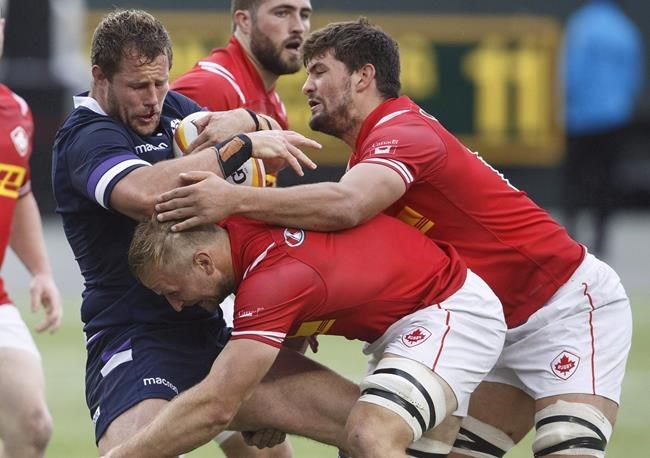 Matt Heaton of Rugby ATL and Ben LeSage and Lucas Rumball of the Toronto Arrows will co–captain Canada for rugby test matches next month in Wales and England.

The July tests mark the first games for the Canadian men since October 2019 at the Rugby World Cup in Japan.

The 23rd-ranked Canadians will face No. 6 Wales on July 3 at Principality Stadium in Cardiff and No. 3 England on July 10 at Twickenham Stadium in suburban London. Jones is using the matches as preparation for World Cup qualifying matches in the fall.

The travelling roster represents a changing of the guard with the touring squad features 25 players from Major League Rugby clubs, including nine from the Toronto Arrows. There are three players from Rugby Canada’s national development academy and two from clubs in France.

Ngawati is a former member of the Toronto Wolfpack rugby league team.

“I think we have to start the cycle again,” said Jones. “Unfortunately there are a couple of senior boys we would have selected obviously but are unavailable due to other commitments and a couple of injuries. But what an exciting opportunity for those younger guys.”

Former Canada captain Tyler Ardron and fellow forward Evan Olmstead, who both play in France, are among a group of nine players deemed unavailable for selection due to injuries and club commitments among other reasons. Others like Shane O’Leary have not seen much action recently.

Rugby Canada says 18 players in the national sevens program were not considered because of their Olympic preparation.

It’s rare that Canada gets to play Tier 1 nations outside of the World Cup these days. Wales is the defending Six Nations champion while England was runner-up at the 2019 World Cup.

Both sides will be missing top players who will be touring South Africa with the British and Irish Lions. England has 12 players on the 37-man Lions squad while Wales has 10.

Kingsley Jones had originally named a 40-man extended roster that featured 29 MLR players including 13 from the Arrows.

The upcoming Wales match will mark 632 days since Canada closed out its World Cup campaign in a 66-7 loss to eventual World Cup champion South Africa on Oct. 8, 2019, in Kobe, Japan. A subsequent World Cup match against Namibia was cancelled due to typhoon Hagibis.

Canada was originally set to host England in Toronto this summer but pandemic-related travel restrictions have shifted the game and others to Europe.

England will play the U.S. Eagles on July 4 prior to facing Canada.

England ran in 12 tries, blanking Canada 70-0 when the two met at Twickenham in November 2004. The Welsh scored nine tries en route to a 61-26 win over the Canadians in Cardiff in November 2006

But Canada scored a historic 26-24 upset of Wales in November 1993 at Cardiff Arms Park thanks to a last-ditch try by Al Charron and conversion by Gareth Rees.

Kingsley Jones is a former Wales captain. Canada senior assistant coach Rob Howley won 59 caps for Wales as a player and was part of the Wales coaching staff between 2008 and 2019.

Jones, whose CV includes a stint in the Russia national team coaching setup, has never coached against his homeland. He coached against England at Twickenham in 2010, when he and France’s Philippe Saint-Andre served as co-coaches of the Barbarians.

The Canadian men have held one high-performance camp, last November in Langford, B.C., since closing out the World Cup.

This report by The Canadian Press was first published June 14, 2021.

No global rugby calendar until at least 2024 – planetrugby.com